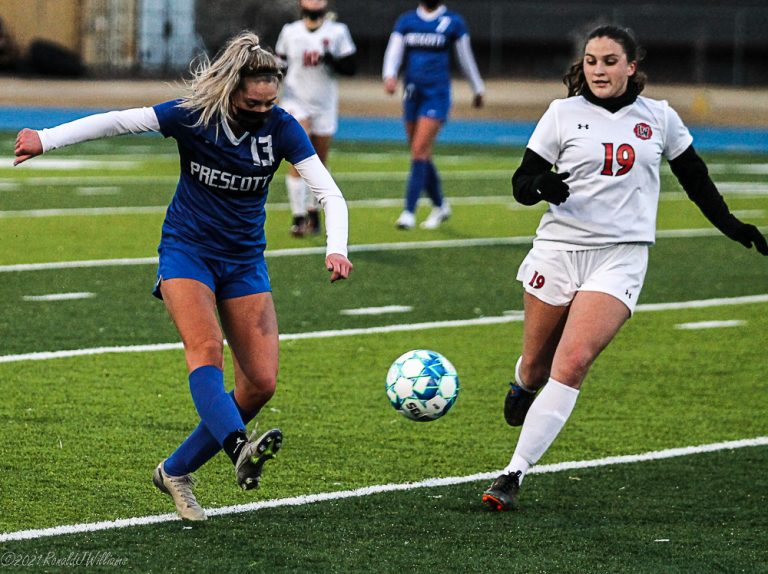 After wins over Mohave 5-2, and Coconino 1-0, the Badgers added a 4-1 win over visiting Lee Williams to their resume, on a cool, windy, and sometimes rainy night in Prescott.

Kaylee Breen scored the first goal by the Badgers off a cross, aka, a medium to long pass by Nicole Raiss. Prescott had some more chances, but were turned away. The score remained 1-0 at the half.

Kari Kasun scored the Badgers second goal with the assist going to Nicole Raiss. Prescott went up 3-0 on a goal that bounced off a Lee Williams player and into their own net.

The  Badgers picked up one final goal on a penalty kick by Ellie Magnett, after Kari Kasun was taken down in the box resulting in a Lee Williams penalty.

The Volunteers managed one goal in the second half by Mackenzie Cathey.

Junior midfielder Emma Stover said, “We adapted to some difficult circumstances, controlling the game and taking our shots when we had them. I think we played strong and I’m proud of the girls for pushing through.”

Coach Paul Campuzano said, “I feel like we are starting to come together as a team after this tough stretch of games. It is difficult to get new players up to speed in such a quick period of time, but tonight was different for us.”

The Badgers are (2-0) on the young season with shutout wins over Mohave 2-0, and last night at Coconino 6-0.

Prescott will visit Mingus (1-0), who opened up with a 4-1 home win over Bradshaw Mountain last night, on Friday at 5 pm.