Flurry of Biden orders on COVID-19 raise some doubts, but more hopes 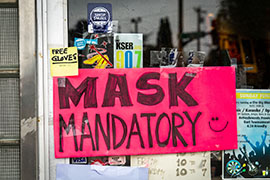 Almost half of the 24 executive orders President Joe Biden has signed in his first two days in office have dealt with COVID-19, which White House officials cite as proof that fighting the pandemic is the top priority for his administration.

“The first order I’m going to be signing here … relates to COVID,” Biden said Wednesday, as he signed an executive order mandating facemasks be worn and other health safety measures be taken on federal property and while on federal business.

That was followed Wednesday and Thursday by orders creating a White House adviser on the pandemic, directing the Labor Department to study health safety rules for workers, requiring masks for public interstate travel, enabling a return to in-person schooling and promising to reimburse states for the use of National Guard troops to fight the pandemic, among other measures.

Few of those orders will have an immediate impact and the one that will – the mask mandate on federal property – cannot change policies in states, like Arizona, that have no statewide mask mandate. But, more than three-quarters of the state’s residents live in counties that already have local mask requirements, and would thus not be affected by a federal rule.

But health officials say that while the order is not everything they wanted, it’s better than nothing – which is what they said they got before.

“We have a plan that is on paper. that is written, that all of us can look at,” said Dr. Georges C. Benjamin, executive director of the American Public Health Association. “We can provide support for the things we like, we can critique the things we don’t like.”

He went on to say that wearing masks is the most important thing the public can do right now to stop the spread of COVID-19 and that he welcomes Biden’s executive order.

Along with the order, Biden also issued a “100-day masking challenge,” which calls on Americans to commit to wearing a mask when they go out for at least the next hundred days.

Will Humble, the executive director of the Arizona Public Health Association, agrees the federal mask mandate is just the first step toward getting the virus under control. While the president cannot tell states what to do, Humble said he can certainly influence them.

“I expect them to use the levers that they have to help drive better policy decisions in states,” Humble said.

He said an executive order is just one of those levers.

“Indirectly, he can have an influence through contracts that his federal agencies have with the state health departments and agreements with what governors have to do when they accept future money that comes from the administration,” said Humble.

Benjamin said he is just glad to see a plan taking shape.

“Those of us who are on the outside of government who are being asked to support the activity, now we know what we need to support,” he said Thursday. “Now we can take our assets and the federal assets and get the best out of our response now. That is what has been missing and been missing for a whole year.”

As Biden signed more orders Thursday, and touted the administration’s 200-page plan for responding to COVID-19, he warned that things are likely to get worse before they get better. The death toll, at 404,689 as of Thursday, will likely to top 500,000 next month. He said the problem didn’t arrive overnight and that it will take months for us to turn things around.”

“Let me be equally clear: We will get through this. We will defeat this pandemic,” Biden added. “To a nation waiting for action, let me be the clearest on this point – help is on the way.”