At Teen Lifeline, teens help in ways only they can 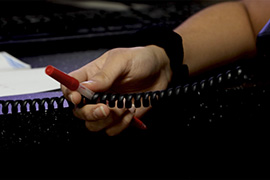 A group of teenagers huddled around a table, some typing essays, others binge-watching a favorite Netflix series. One teen pored over “Frankenstein” for her English class.

Each was deeply immersed in their tasks, but when a phone rang, the mood of the room quickly switched. Red lights blinked on each landline and a tri-tone melody echoed in the lounge. One of the teens hustled through a glass door into the hotline room, pulled out a notepad and took a deep breath.

These are the sorts of calls fielded by volunteers at Teen Lifeline, a peer-to-peer crisis call center in the Phoenix area that regional health experts consider the gold standard of youth crisis communications. Rather than reaching an adult health professional, distressed callers talk to teens their own age.

“You want to talk to someone who looks like you,” said Kelli Donley Williams, suicide prevention specialist for the Arizona Health Care Cost Containment System, Arizona’s Medicaid agency. “Peer models are really efficient.”

“These people normally don’t have anyone else in their lives that they can turn to,” said Claire, a teen volunteer. “Sometimes they’re afraid of people judging them. … We don’t offer that kind of judgment.”

The work can be stressful, but it also offers a lot of down time. When the phones are silent, volunteers move to the lounge, where some catch up on schoolwork and others debate such silly questions as whether dragons have nipples.

But when the unfettered spread of COVID-19 forced millions into isolation last spring, it changed the daily routines of both the volunteers and the callers who depend on them.

The hotline was established 34 years ago, and Nikki Kontz has worked there for 26 of them, starting as a volunteer and eventually becoming clinical director. In 2018, she said, 28,000 young people reached out for help through calls or texts, and a third of those were youth contemplating suicide.

Now that Arizona schools have moved to mostly online instruction, Kontz and other clinical professionals are tracking trends and preparing for an influx of calls and texts.

Although it’s too early to predict whether there will be an increase in Arizona’s suicide rate because of COVID-19, Kontz said, “we do anticipate an increase of anxiety, of mental health symptoms, of the need for support, and we anticipate there’s going to be definitely an increase in … feelings of hopelessness and helplessness.”

Williams said “isolation and loneliness are two of the key threads to suicide at any given time.”

“I would imagine that individuals are feeling heightened rates of both isolation and loneliness during this time, which is very scary working in suicide prevention,” she said.

According to the American Foundation for Suicide Prevention, the suicide rate for Arizona youth ages 15 to 24 has been rising steadily since 2007.

But organizations such as Teen Lifeline acted swiftly in their response to the global pandemic, taking precautions more than two weeks before Gov. Doug Ducey instituted a stay-at-home order in mid-March.

“We immediately staggered our staffing so that we were making sure that the least amount of us were in the actual building at a time,” Kontz said. This measure was put in place so that if any staff member were to contract COVID-19, the operation could remain intact.

Williams called this continuation of the hotline “critically important” for Arizona teens.

“To have someone on the other end of a call … who can help talk you through what you’re feeling and connect you to resources in the community, and perhaps a therapist or a behavioral health professional, is necessary,” she said.

The cancellation of prom, graduation and other major events dealt a heavy blow to teenagers across Arizona. These were experiences they had been waiting years for and may not get to make up.

“I think what a lot of people outside of us don’t always know or realize is that our volunteers are no different than our callers,” Kontz said.

“I don’t get to do all the fun senior things like prom and graduation,” said Keith, a volunteer from Dobson High School, who, like all the teen volunteers, asked that his last name not be published. His concern has been echoed by other volunteers and callers.

Teen Lifeline still serves as a safe place for Claire, Keith and other volunteers. Although they must now practice social distancing during their shifts, helping others is a constant in an otherwise chaotic time.

“They’re coming in a lot more,” Kontz said of volunteers. “We’re just here for each other.”

Seoyoon, another volunteer who asked that her name not be published, had to return home from Harvard University when the pandemic began.

“I like to feel like I’m still making a difference, still contributing and making sure that people are feeling heard and listened to, especially in a time of crisis,” she said.

The increase of Teen Lifeline volunteers mirrors the increase in young people reaching out for help. Kontz said peer-to-peer support via text messaging was increased to nine hours a day instead of the usual six hours, and Teen Lifeline saw an immediate increase in messages.

Calls still are being answered during the usual 3 p.m. to 9 p.m. time frame, but Kontz said the group anticipates a “staggering increase of calls” as teens adjust to online learning and the reality of losing high school milestones.

By late April, after Ducey’s stay-at-home order had been in effect about a month, Teen Lifeline saw a 10% increase in call volume.

Anvitha, another volunteer, said it’s important for the crisis line to remain available so callers still can reach out amid high stress and feelings of isolation.

During the pandemic, Teen Lifeline volunteers are spreading a simple message: “We’ll survive this together.”

“It’s comforting to know that I can still make a difference, even when things are like this in society,” Anvitha said.

For volunteers and callers alike, the present is vastly different from their past. Their future is unknown. Through all of the changes, Kontz said the volunteers at Teen Lifeline are unwavering in their efforts to help callers and texters identify reasons to continue living and find sparks of hope.

EDITOR’S NOTE: This story was written as a class assignment outside of Cronkite News. Cronkite News agreed to publish this article, which cites several anonymous sources who volunteer at Teen Lifeline. The anonymity was granted because of the ages of the sources and the sensitivity of the subject matter.

PrevPreviousFemale inmate’s execution on hold; 2 more halted over COVID
NextResearch finds COVID-19 may worsen symptoms of those with Tourette’sNext