Fired for storming the Capitol? Why most workers aren’t protected for what they do on their own time 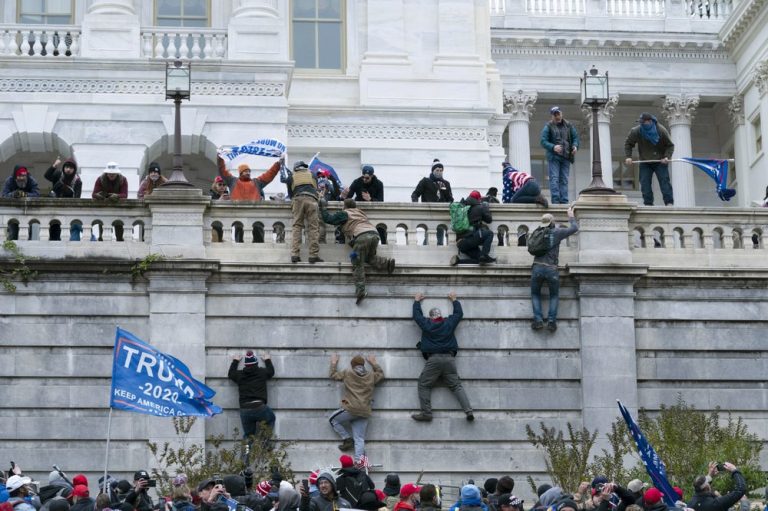 Can you be fired for joining a violent mob that storms the Capitol?

Of course you can.

Among the jarring images of white insurrectionists who broke into the U.S. Capitol on Jan. 6 was a man marching through the building holding a Trump flag with his work ID badge still draped around his neck.

It didn’t take long for internet sleuths to zoom in on the badge and alert his employer, Navistar Direct Marketing, a Maryland direct mail printing company.

The company promptly fired the man and contacted the FBI, issuing a statement that “any employee demonstrating dangerous conduct that endangers the health and safety of others will no longer have an employment opportunity.”

Even though the Capitol Police let all but 14 of the rioters walk away, the FBI and District of Columbia police have begun tracking them down. Other companies have also taken action against employees identified in the many photos from inside the Capitol. Even the CEO of a data analytics firm found himself without a job following his arrest.

Based on my experience as a law professor and lawyer specializing in employment law, I doubt that Navistar management is losing sleep over whether its decision was legally justified.

It’s not even a close case. Non-unionized workers in the United States – about 90% of all workers – are employed at-will. That means you can be terminated at any time, without notice, for any reason. It doesn’t even have to be a good reason. Unless the company has guaranteed your job in writing, or there is a specific law that protects your conduct – such as laws protecting union organizing or whistleblowing – your fate is up to them.

The law is more protective when it comes to unionized workers and government employees. These workers may have the right to be terminated only for cause, and they might get a hearing process prior to being disciplined. Government workers are also protected by the First Amendment, particularly when it comes to free speech in their capacity as citizens rather than speech related to the workplace.

That’s why the teachers and off-duty police officers spotted at the Capitol have only been suspended pending investigations, rather than fired outright. For these workers, their fate may depend on whether they were peacefully participating in the day’s earlier rally – an activity that would be considered protected speech – as opposed to engaging in violence or joining the capitol invasion, which would be unprotected illegal conduct.

Things get murky if these government workers were displaying white supremacist symbols, like a confederate flag, at the rally. Courts have recognized limits on the public speech of police officers to uphold public confidence, community relations and department morale.

But as the Brennan Center, a liberal-leaning law and public policy institute, observed in an August 2020 report, “few law enforcement agencies have policies that specifically prohibit affiliating with white supremacist groups.” The absence of such policies could make it harder for departments to later discipline off-duty police officers for their role.

State lawmakers who participated are a different matter. Because they were elected by the people, they can’t be removed like ordinary employees. That might require a recall election or a state impeachment process.

But for most of the folks who snapped selfies in the Capitol – or ended up in someone else’s – if they don’t get a knock on the door from the FBI, they may soon be getting one from HR.