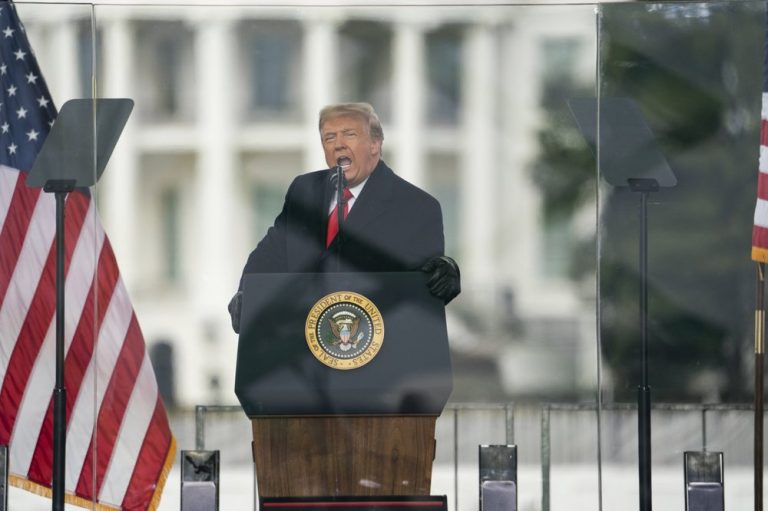 President Donald Trump enters the last days of his presidency isolated and shunned by former allies and members of his own party as he faces a second impeachment and growing calls for his resignation after his supporters launched an assault on the nation’s Capitol in an effort to disrupt the peaceful transfer of power.

Cut off from the social media channels that have been the lifeblood of his presidency, Trump will nonetheless try to go on offense in his last 10 days, with no plans of resigning.

Instead, Trump is planning to lash out against the companies that have now denied him his Twitter and Facebook bullhorns. And aides hope he will spend his last days trying to trumpet his policy accomplishments, beginning with a trip to Alamo, Texas, on Tuesday to highlight his administration’s efforts to curb illegal immigration and border wall construction.

Trump’s decision to travel to Alamo — named after the San Antonio mission where a small group of Texans fighting for independence against the Mexican government were defeated after a 13-day siege — served as a symbol of his defiance as he faces the most volatile end of any presidency in modern history.

Trump has not taken any responsibility for his role in inciting Wednesday’s violence amid a rebellion from members of his own party and ongoing efforts to remove him from office. A second Republican senator, Pat Toomey of Pennsylvania, on Sunday called for Trump’s resignation after Sen. Lisa Murkowski of Alaska told the Anchorage Daily News: “I want him out.”

It was a stunning reversal for a man who had once been considered the leading contender for his party’s nomination in 2024, and could now be stripped of his ability to run for a second term.

A new ABC News/Ipsos poll released Sunday found that over half of Americans — 56% — believe that Trump should be removed from office before his term ends. And two-thirds of respondents – 67% — said he deserves a “good amount” or a “great deal” of blame for the rioting last week.

Trump had delivered a speech to his supporters in which he repeatedly said the election was being stolen and urged them to “fight” before they rushed the Capitol as lawmakers were in the process of certifying Biden’s wins. The violent crowd forced its way inside, ransacked the building and sent terrified staff and lawmakers, including the vice president, into hiding. Five, including a Capitol police officer, died.

Rattled by the violent insurrection and images of MAGA-loyalists hunting for them in the Capitol’s hallways, House Democrats moved quickly toward a second impeachment this week, though Republican Senate Leader Mitch McConnell has said a trial in his chamber would not begin before Biden takes office.

While people close to Trump said they would certainly prefer he not become the only president in the nation’s history to be impeached a second time, Jason Miller, a close adviser, noted that Trump’s popularity rose after his first impeachment trial. And he argued that, if they moved forward, Democrats risk turning public sentiment against them and impeding Biden’s agenda by continuing to focus on Trump even after he has left the White House.

“As I said to the president this morning, never discount national Democrats’ ability to galvanize the Republican base behind you,” said Miller, arguing that, if “national Democrats were to go down that path, I think it would boomerang on them very severely.”

“Joe Biden doesn’t want to spend the first 100 days of his presidency having to own a vindictive and overreaching impeachment trial,” he added.

Concerns continued to bubble through the weekend about how Trump, who thrives on chaos and attention, might respond. Wednesday’s episode cut to the core of the nation’s self-identity — that of a functioning, stable republic — sparking soul searching in Washington and around the world.

But Trump, who once delighted in how quickly the missives he’d type on his smartphone would land as “BREAKING NEWS” chyrons on the cable news networks, has not expressed contrition, and has instead been consumed by anger. Trump has been described as apoplectic over the loss of his Twitter platform and is now without an outlet for releasing that anger.

And he remains surrounded by an ever shrinking coterie of aides as more mull early departures and he rages at others, including Pence, who had spent the last four years as his most loyal soldier.

The two men have not spoken since Wednesday when Pence informed Trump that he would not be going along with Trump’s unconstitutional scheme to throw out legal electoral voters in his bid to overturn the election. Pence had never had that power in the first place, but that didn’t stop Trump from insisting he did, both publicly and privately, turning Pence into a scapegoat who could be blamed for Trump’s defeat.

Pence allies are now livid about the president, whom they believe not only set him up for failure, but put his life — and the life of his wife, daughter and brother, who were with him at the Capitol — in physical danger. After repeatedly claiming Pence could unilaterally reverse the election’s outcome at Wednesday’s rally, Trump then tweeted that Pence lacked the courage “to do what should have been done to protect our Country” as the siege was underway and never bothered to check in on Pence’s safety, according to a person close to Pence.

Still, there is no indication that Pence is seriously considering moving to invoke the 25th Amendment to remove Trump from power, as calls continue for him to make that move. Aides have not, however, ruled it out explicitly, keeping the option on the table in case Trump takes further action that might warrant discussion, according to two people close to him who, like others, spoke on condition of anonymity because they were not authorized to discuss internal planning.

“What I’ve heard from fellow Republicans is that they’ve had enough,” said former New Jersey Gov. Chris Christie, a longtime friend and informal adviser. He told ABC’s “This Week” that he considered Trump’s conduct grounds for impeachment, saying, “If inciting to insurrection isn’t, then I don’t really know what is.”

Christie also criticized Trump for refusing to lower the White House flags to half-staff in honor of Brian Sicknick, the Capitol police officer who died of injuries sustained as he tried to ward off the riotous mob, calling it a “national disgrace.”

Hours later, the White House quietly lowered the flags, though Trump has still offered no public comment on the officer’s death.

Meanwhile, Trump has largely been absent from his presidential duties since he lost the election, consumed instead with base conspiracies about mass voter fraud that his own government has rejected, even as the coronavirus pandemic spirals further out of control.

While his legacy will surely forever be stained by Wednesday’s violence, aides nonetheless are pushing Trump to spend his final days trumpeting his policy achievements. Events have been discussed to highlight his administration’s efforts to bolster Mideast peace, roll back regulations, support jobs and manufacturing and curb China’s power, though previous such efforts have been rebuffed.

While it is unclear whether such action would have any practical impact, Trump is also mulling potential executive action as he escalates his war against big tech after he was banned by Twitter and Facebook and as Amazon moves to shut down platforms like the conservative favorite Parler amid concerns about potential future violence ahead of President-elect Joe Biden’s inauguration on January 20.

1 thought on “Trump remains defiant amid calls to resign”