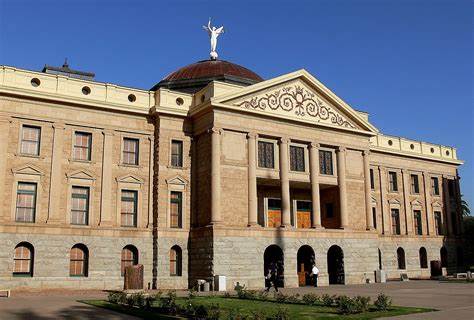 (reprinted from the American Post-Gazette with permission)

1. Legislative authority; initiative and referendum
Section 1. (1) Senate; house of representatives; reservation of power to people. The legislative authority of the state shall be vested in the legislature, consisting of a senate and a house of representatives, but the people reserve the power to propose laws and amendments to the constitution and to- enact or reject such laws and amendments at the polls, independently of the legislature; and they also reserve, for use at their own option, the power to approve or reject at the polls any act, or item, section, or part of any act, of the legislature.

Facts: Under Arizona Revised Statutes there are a number of restrictions that past Arizona Legislatures have enacted to provide an orderly and expedited process for uncontested elections. Ordinarily, each Arizona county administers its own election, certifies the result and notifies the Secretary of State of the result. In the case of the Presidential Election, and in normal order, the Secretary of State notifies the Governor, and the State’s 11 Electoral Votes are released to the winning candidate. In the case of the 2020 Arizona Election however, fraud of many sorts has been identified, including counterfeit ballots mailed to unregistered voters, pre-loading of “vote tics” on some tabulation machines, dead voters voting, and most prevalent of all, real-time “vote tic” realignment from one candidate to another.

Rule: Under Article II, Section 1, “Each State shall appoint, in such Manner as the Legislature thereof may direct, a Number of Electors, equal to the whole Number of Senators and Representatives to which the State may be entitled in the Congress” (At Pa. 2). Under Article VI, “This Constitution, and the Laws of the United States which shall be made in Pursuance thereof; and all Treaties made, or which shall be made, under the Authority of the United States, shall be the supreme Law of the Land; …” (At Pa. 2). Article IV, Section 4, guarantees each state a republican form of government, the foundation of which is self-governance through free and fair elections accurately reflecting the will of the people.

Analysis: There are many laws in Arizona that govern an uncontested, normal order, Federal Office Election. The election for Electoral College Electors, United States Senate, and Congressional Representation are the offices addressed in this analysis. The House of Representatives Legal Counsel analysis of pertinent statutes (found in references) notwithstanding, the essential question at hand follows a fact pattern that Arizona has never faced, and which the Arizona Revised Statutes are silent on. When the Legislature is made aware that sufficient fraud in the election of Federal officials exists, so as to call into question the legitimacy of the election, is the Legislature bound by pertinent state statutes and prevented from stopping a fraudulent election to proceed to its logical conclusion? Arizona law is silent on actions that the Legislature may engage in to ensure a fair and impartial election.

However, the United States Constitution, the supreme law of the land, is not. Article II, Section 1, paragraph 2, grants plenary authority to determine how electors are appointed to the State Legislatures. As articulated by retired North Carolina Supreme Court Chief Justice Mark Martin, “the Constitution grants no role in directing the appointment of electors to the state’s executive or judicial branches. It is the plenary authority and obligation of the Legislature to do so. Since this authority and obligation is placed solely upon the Legislature by the highest law of the land, the Legislatures are not impeded by state statutes in fulfilling this duty.” Indeed, in light of the Supremacy Clause, it would be disingenuous to argue that state procedural requirements prevent the Arizona Legislature from fulfilling its duty under the United States Constitution. This means that the Legislature may be called to Special Session with a simple majority of members (31 in the House of Representatives and 16 in the Senate) to fulfill its Constitutional duty to direct the appointment of electors and ensure a republican form of government in Arizona.

Once in session, the normal order of business in the House and Senate is in place, including notice of hearings, hearings to accept evidence and testimony, generation of legislative findings, generation of resolution(s), and debate to pass or defeat resolutions whether or not to approve Electors.

An essential question that cannot be overlooked or assumed is the level of cooperation that Legislators will offer. There are in the body individuals who were not reelected and are so partisan that they will likely not avail themselves to act. This devolves to a Committee Hearing only, that will provide a venue for the hearing of grievances, testimony and the presentation of other forms evidence. The nature of the evidence presented to the Committee will determine whether the larger body is compelled to act pursuant to its Constitutional authority.

Conclusion:  Under the plenary authority reserved to State Legislatures by the Constitution of the United States, the Arizona Legislature may indeed call itself into Special Session without interference from the Executive or Judicial branches so as to fulfill its Constitutional duties. Moreover, the State Legislature cannot be tethered to a State Constitution provision or statute that interferes with the discharge of such duty, specifically a requirement for a two-thirds majority to call a special session. And, when there is reasonable suspicion that election fraud has occurred, the Legislature has the duty to call itself into session to hear testimony and accept other forms of evidence to prove or disprove the alleged election fraud. Where the evidence of fraud is so compelling that it calls into question the legitimacy of an election, the Legislature is duty bound to direct the appropriate appointment of Electors. In the matter of the 2020 Electoral College Electors, time is of the essence. If the election is proven to be illegitimate, the Legislature has the solemn Constitutional duty to take appropriate action to ensure the will of the people is accurately reflected through the reclamation of Electors where appropriate.

Q.       Can Arizona’s presidential electors cast their electoral college votes for whichever candidate they prefer?
A.       After statutory changes made in 2017, A.R.S. § 16-212 requires presidential electors to cast their electoral college votes for the candidates for president and vice president who jointly received the most votes according to the statewide canvass. An elector who knowingly refuses to do so automatically is removed from office. Representative Kern was the prime sponsor of the bill that made these changes, which received near-unanimous support from Republicans in both the House and the Senate.

Q.       Can the Legislature force a statewide or countywide hand count now?
A.       A.R.S. § 16-602 requires each county officer in charge of an election to conduct a hand count according to a statutory process, as well as the hand count procedures established by the Secretary of State in the Election Procedures Manual. Once that hand count is complete, the county can conduct another one only if the first hand count produces a certain margin of discrepancy. Maricopa County’s hand count produced zero discrepancies. Consequently, the county considers that the official count by statute.

A.       The Attorney General’s Office informally opined that these provisions do not conflict, because (among other reasons) A.R.S. § 16-602 states that “[t]he hand count shall be conducted as prescribed in this section and in accordance with hand count procedures established by the secretary of state in the official instructions and procedures manual adopted pursuant to § 16-452″—that is, the Election Procedures Manual. The EPM has addressed hand counts of ballots cast at vote centers since 2012. This issue is currently being litigated in Arizona Republican Party v. Fontes (No. CV2020-014553).

Q.       Can the Legislature force a statewide or countywide recount?
A.       A.R.S. § 16-661 et seq. provide for a recount only when the canvass of returns shows a specified, narrow margin of victory, but no race in Arizona is within any of those statutory margins. Additionally, A.R.S. § 16-671 et seq. authorize election contests, including on grounds that votes were cast illegally or counted erroneously (A.R.S. § 16-672(A)(4)–(5)). No such election contest has been filed so far.

Q.       Can the Legislature force an additional audit of the Dominion Voting Systems machines?
A.       Arizona law includes many safeguards for ensuring the reliability and integrity of the voting equipment that is used here. For example, under A.R.S. § 16-442 and the Election Procedures Manual, a new voting system must be certified by a Voting System Test Laboratory accredited in accordance with federal law, the federal Election Assistance Commission, and the Secretary of State, based on a recommendation from the state Election Equipment Certification Committee. Additionally, A.R.S. § 16-449 and the EPM require extensive testing of voting equipment both before and after the election. That testing is open to designated political party representatives, candidates, government officials, the public, and the press. None of the testing of Maricopa County’s tabulation equipment has revealed any tabulation errors, and no law authorizes the Legislature to require additional testing now.

Q.       What is the status of the election lawsuits?
A.       The Trump campaign dropped its lawsuit against the Secretary of State and Maricopa County officials last Friday. Two lawsuits remain pending in Maricopa County Superior Court: Arizona Republican Party v. Fontes (No. CV2020-014553), in which the plaintiff asserts that Arizona law requires counties to hand count ballots cast in at least two percent of precincts, not vote centers; and Aguilera v. Fontes (No. CV2020-014562), in which one voter claims she was denied the right to vote, and a second voter claims he was denied the right to have his vote counted. Neither pending lawsuit alleges that fraud occurred, and the Trump campaign repeatedly disavowed claims that it did.

Q.       What election-integrity measures has the Legislature enacted recently?

A.       To take just a few examples, since 2019, the Legislature has enacted election-integrity measures that:
•             permitted the use of new ballot counting and processing equipment in order to increase the speed and accuracy of tabulating ballots and resolving discrepancies (SB1135—E. Farnsworth, 2020);
•             advanced the deadline for issuing an Election Procedures Manual in order to provide election officials ample time to review and implement the policies and procedures the EPM establishes (HB2238—Townsend, 2019);
•             required voters to present a valid form of identification before they are given a ballot (SB1072—Ugenti-Rita, 2019);
•             required the county recorders to report the number of persons who are registered to vote but have not presented proof of citizenship, and—after each general election—the number of federal-only ballots cast (HB2039—Townsend, 2019); and
•             established emergency voting procedures, along with additional guidelines to combat voter fraud (SB1090—Ugenti-Rita, 2019).

Q.       What other election-integrity measures are in place?
A.       Over decades, the Republican-led Legislature has built an electoral system in Arizona that is efficient, reliable, transparent, and secure. Among the many election-integrity measures already in place are laws:
•             governing the procedures for opening, exhibits, locking, removal, and reopening of ballot boxes (A.R.S. § 16-564);
•             requiring that voting or marking devices be sealed after the polls close, and that unused ballots be sealed for return to the board of supervisors or other officer in charge of elections (A.R.S. § 16-566(B));
•             mandating that voting machines be in full view of all election officers and observers at the polling place (A.R.S. § 16-570(B));
•             requiring, after the polls close, that sealed ballot boxes be delivered by two election board members from different political parties to a counting place, and allowing county party chairmen to designate a party member to accompany the ballots (A.R.S. § 16-608);
•             prescribing detailed procedures for ensuring that votes are tabulated in a transparent manner, including live video recording of the custody of all ballots while they are present in a tabulation room (A.R.S. § 16-621);
prohibiting ballot harvesting and other practices that compromise ballot integrity (A.R.S. § 16-1005)

Rep. Mark Finchem is a Legislative Fellow in Residence at the James Rogers School of Law, University of Arizona, Tucson, AZ.
All Posts »