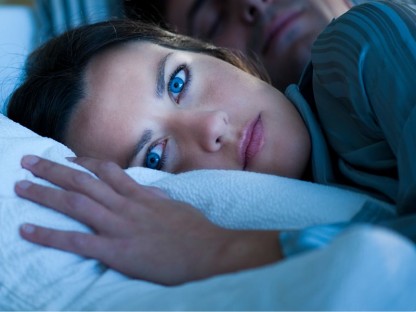 Paulina Ochoa never had a problem sleeping until the COVID-19 pandemic began in March and life dealt her a series of serious setbacks. She lost both her jobs, her car was stolen and her aunt died – and that’s when the nightmares started. The dreams got so bad they sometimes left her paralyzed in bed.

Ochoa isn’t alone. A sleep study conducted by University of Arizona researchers monitored the role of insomnia during the pandemic, and more than 50% of 1,000 participants reported experiencing insomnia.

Ochoa, a sustainability student at Arizona State University, tried to wear herself out by staying up until 7 a.m. so she’d be forced to finally fall asleep.

The insomnia eventually made her imagine hearing voices or see unsettling shadows.

“I was just so scared, you know? I had two occasions where the ‘voices’ thing started happening,” Ochoa said. “I just didn’t even want to close my eyes.”

Michael Grandner, who runs the Sleep and Health Research Program in the UArizona’s department of psychiatry, said he has seen a great number of people with sleep problems this year.

“With everything going on during the day, they have a real hard time disconnecting,” he said.

Grandner, who also sees patients at the Behavioral Sleep Medicine Clinic at Banner Health, said insomnia occurs on a spectrum.

“So there’s insomnia, I would say with a lowercase ‘i’, which is just sort of the experience of being unable to sleep sometimes,” he said, adding that many people deal with insomnia at some point in their life.

“Then there’s the line into what we call insomnia disorder, which is actually a diagnosable medical condition that usually does not go away on its own once you meet criteria for it.”

Grandner said if it takes more than 30 minutes to fall asleep for at least three nights a week, and if the pattern has been ongoing for months, you may have insomnia.

Lauri Leadley, president of Valley Sleep Center, a company with several locations in metro Phoenix, said stress is a common cause of insomnia.

“Insomnia is literally the inability to escape your thoughts. And during stressful times, our bodies create cortisol … our ‘awake’ hormone,” Leadley said.

Unable to escape her stressful and frightening thoughts, Ochoa tried to force herself to exhaustion. But even when she finally fell asleep, she said, nightmares would jolt her awake.

Nightmares can do double damage, said Denise Rodriguez, a clinical psychologist who specializes in behavioral sleep medicine to treat insomnia at Banner Health.

“Typically, for a lot of folks who do struggle with nightmare disorders, it’s not just that they’re having a nightmare, but that the nightmare prevents them from going back to sleep,” Rodriguez said.

After losing two jobs and switching to online learning at ASU, Ochoa’s daily routine became less active. Rodriguez said that could cause an increase in dreaming.

“Some of the theories behind why we’re dreaming more is that we’re under stimulated during our day … and so our brain is trying to give us that extra stimulation at night,” Rodriguez said.

Grandner said inactivity during the day is a common denominator in people with insomnia.

“Sleep difficulties are probably the most reliable predictor of poor mental health,” he said, “and especially in terms of depression and anxiety.”

“There have been over 50 studies now that when you pool them together, people who have significant sleep problems, whether it’s nightmares or insomnia, are about three times as likely to be thinking about suicide,” he said.

Ochoa said she was already experiencing stress and anxiety in daily life, which insomnia only made worse. Then, in June, Ochoa tested positive for COVID-19.

“So I was still having trouble sleeping and now I had the added factor of like, (I) can’t breathe right,” she said.

Insomnia can significantly increase the chances of getting sick, Grandner said.

“If you want to have a robust immune system,” he said, “it’s important to sleep. There’s data that shows that people who aren’t getting enough sleep, they’re more likely to get sick, especially for viral infections.”

To get better sleep, Grander suggests reducing screen time, getting sunlight exposure shortly after waking up and exercising during the day rather than at night.

Sleep is programmable, he said, and it’s important to train the brain that the bed is meant for sleep, not for rehashing the day or planning the next.

Before getting in bed, he said, “Check your schedule, process all the stuff that you need to process so that by the time you get into bed, you’ve already done all that work.”

“I actually kind of got it solved. I actually had to go ahead and resolve to getting a blessing from this church,” she said. Her visit to the church was just over two months ago.

The blessing consisted of two missionaries applying oil to her forehead, placing their hands on her head and praying.

So far, Ochoa said, she’s having fewer nightmares and sleeping much better.