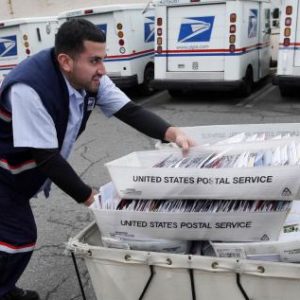 COVID cases are spiking, millions of Americans are out of work through no fault of their own and emergency benefits are expiring.

While Congress and the administration were right to pursue a fifth COVID relief package, the stakes are high for getting the money to where it is most needed. It is also not too soon for America to get back on the road to some sort of fiscal responsibility.

The U.S. Postal Service, which is part of the federal government, offers an intriguing case study both of what the U.S. government has done right during the pandemic and of how political demagoguery and fiscal irresponsibility know no bounds in Washington.

First, the good news. Throughout the nine-month pandemic, postal workers have carried on with poise and resolve, delivering mail and packages throughout the country, lessening the pandemic’s hardship for many.

USPS received targeted help from the federal government in the pandemic’s early days via a $10 billion line of credit as part of the March 27 CARES Act. And there is more good news: USPS has not had to tap these funds as it has more cash on hand – $14.3 billion as reported for the end of fiscal year 2020 — than at almost any time during its history.

And in October, USPS had net income of $405 million, the result of record volumes of election mail.

So why are many in Congress now pushing to give USPS at least a $10 billion grant, a provision widely reported to be in the “bipartisan” COVID proposal? The short answers are (a) politics and (b) it is less than $25 billion.

In April, USPS made an audacious request for $75 billion in assistance from the House of Representatives Committee on Oversight and Reform. Reportedly, congressional Democrats pressured USPS to ask for much more than it was originally requesting. USPS also warned that operations could grind to a halt by September if it did not receive substantial assistance.

In August, the House passed $25 billion in assistance during a special session. The Senate did not pass the measure and the Postal Service operated through September and the election, where mail-in voting was widespread.

USPS does have major, systemic financial issues that need to be addressed. It has lost money for 13 consecutive years, defaulted on more than $48 billion to the federal government, and its consolidated balance sheet shows that its liabilities exceed assets by $163 billion.

What USPS needs from Congress is reform that ensures it operates on a break-even basis, as it once did. Congress has been loath to do this despite repeated warnings from the  Government Accountability Office, which has had USPS on its high-risk list of government agencies since 2009.

Getting to financial stability starts with identifying and defining USPS’s Universal Service Obligation, or core mission. Some USO services, such as mail for the blind, will merit public assistance or subsidies.

Most USPS services, though, should be paid for entirely by those who use the service. Senior citizens on a fixed income in Nebraska should not have to subsidize packages for urban millennials who would rather order online, and receive home delivery, than go to a store.

To eliminate such unfairness, modern cost-allocation and pricing systems will need to be implemented, something USPS’s Office of Inspector General has called for since 2014.

To protect taxpayers, and to keep the heat on Congress to make true postal reform, the next COVID package should not include money for USPS.

Rather, the funds should be put toward helping those who are out of work and facing catastrophe.

Paul Steidler is a senior fellow with the Lexington Institute, a public policy think tank in Arlington, Virginia. He wrote this for InsideSources.com.

Counterpoint: The Mail Must Go Through

As a public service, the U.S. Postal Service has provided a significant boost to the nation’s prosperity and well-being. A strong postal service is essential under the current threats of a pandemic and an economic recession.

The USPS is in financial trouble for no reason other than Congress decreed that it should be so. The president’s role has been to install a postmaster-general, one Louis DeJoy, to administer the coup de grâce.

In 2006, Congress enacted the Postal Accountability and Enhancement Act, requiring the service to pre-fund its employee pensions and retirement health care insurance with revenues from stamps and the like, unlike most other federal government agencies. The result is operating deficits that give DeJoy an excuse to cut services. Such cuts will further reduce revenues, giving rise to further deficits. Rinse and repeat.

The postal workers’ unions are asking for a $25 billion share of the disputed COVID-19 relief package. A bipartisan agreement for $900 billion has been struck and could be passed quickly if the Republican Senate Majority Leader Mitch McConnell permitted a vote to be taken.

At present, the USPS has already been granted $10 billion in new borrowing authority. That is certainly better than zero, but it is well short of adequate. It doesn’t take advanced math to see that within the large federal budget, maintaining mail delivery is a relatively minor task in the grand scheme of things. Relief measures in the trillions for other purposes have been discussed and may see the light of day when Joe Biden takes office next month.

The problem is not just financial. It is also managerial. DeJoy has shown a determination to whittle down the service. He has failed to use the $10 billion already provided. Without the hurricane of protest, he might have succeeded in sabotaging vote-by-mail. He has to go. He might be better off leaving on his own, the better to prepare for potential prosecution for campaign finance crimes.

The USPS is an under-appreciated public asset. The pandemic makes it more so. The more than 30,000 postal retail facilities could assist in vaccine distribution and other relief functions. We are seeing lines of hundreds of vehicles at food banks. The sooner universal vaccination is accomplished, the sooner the economy can be turned back up to maximum capacity.

Economically, a supplement to USPS operating revenues is also opportune.

The privatization alternative pushed by DeJoy and the politicians seeking to limit USPS resources to the revenues that can be collected will mean further degradation of service, which has also been the experience in other countries.

Mail and packages will take longer to arrive, Saturday delivery will be abolished, hours and staffing at post offices will be reduced. The traditional value of “universal service” will be threatened, giving rise to astronomical postage rates applied to places with higher delivery costs, like Alaska and Hawaii, as well as to relatively isolated, thinly settled rural locations.

Even if the $25 billion were forthcoming, a report from the Government Accountability Office made clear that more basic, unresolved questions surround the future of the USPS.

One unresolved question is whether the service’s operations should be limited by its ability to be “self-funding.” We don’t ask the Department of Defense to organize bake sales to fund its activities.

Another is whether the service should be limited to mail and package delivery. In other countries, it is recognized that the postal service is a pillar of the public communications infrastructure. It might profitably expand into new areas, if permitted to do so.

One area of expansion is postal banking, which is not actually a new area. The United States had postal banks in the years leading up to World War II, after a wave of private banking failures. Today, the private sector banks have failed to provide universal service, as documented by the Federal Deposit Insurance Corporation, obliging working families to resort to assorted fly-by-night financial operators, who provide a lack of security and usurious interest rates.

The past four years have taken us a long way further down the trail of what John Kenneth Galbraith, decades ago, described as “an atmosphere of private opulence and public squalor.” Rehabilitating the U.S. Postal Service is one small but necessary step back to a well-functioning government and a civilized society.

Max B. Sawicky is an economist, writer and a senior research fellow at the Center for Economic and Policy Research. He wrote this for InsideSources.com.

PrevPreviousPresident Trump and First Lady Melania Trump wish all Americans a Merry Christmas
NextHow holiday cards help us cope with a not-so-merry year, according to a professor of comedyNext