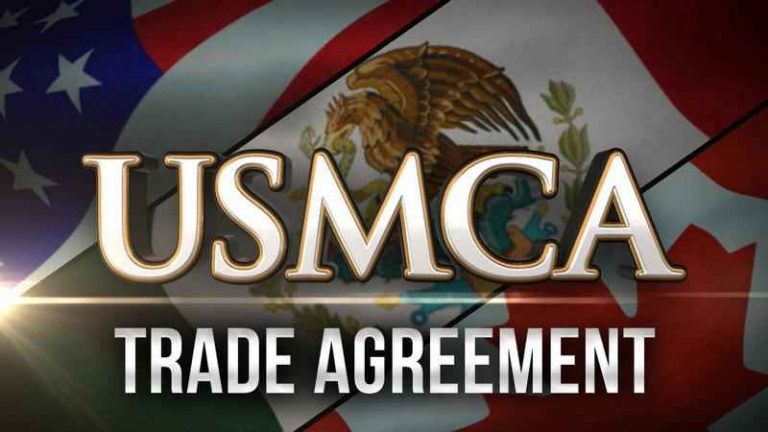 President Donald Trump entered office pledging to blow up trade deals, and he later imposed tariffs on trading partners around the world – but the biggest threat to Arizona-Mexico trade over the past four years appears to have been COVID-19.

Despite four years of tumult, trade between Arizona and Mexico has been remarkably stable since Trump took office, with a dip this year that experts blame on the pandemic.

That leaves President-elect Joe Biden taking over with a new trade deal in hand, and with a break to COVID-19 on the horizon, giving Arizona Chamber of Commerce President Glenn Hamer hopes for a “renaissance in our relationship with Mexico and Canada.”

That would be good news for Arizona businesses, which export “four times as much stuff to Mexico as really any other country,” Hamer said.

As of October 2020, the most recent month for which numbers are available from the University of Arizona Eller College of Management, which tracks Arizona-Mexico trade, total trade was just under $13.4 billion, with a steep drop after March blamed on the coronavirus, a drop that could continue.

“I look for 2021 to also be down, not up, because we’re still nowhere near coming out of the impact of COVID-19,” said Al Zapanta, president and CEO of the United States-Mexico Chamber of Commerce.

But Hamer believes that once “all of the border restrictions are lifted it should be back to regular programming, where we’ll continue to see an upward trend in both our exports and imports to Mexico.”

Trade has been steady despite Trump’s hard-nosed approach to renegotiating the North American Free Trade Agreement, a deal that eliminated most tariffs between the U.S., Mexico and Canada beginning in 1994.

Trump raised the stakes again in 2019 when he announced a 5% tariff on all Mexican imports until “such time as illegal migrants coming through Mexico, and into our Country, STOP,” the president said in a tweet. The tariff was set to gradually increase to 25%.

Economists and business leaders blasted both moves, which they said would backfire on U.S. workers and businesses. Hamer at the time called the immigration tariffs a “prescription for a self-induced economic slowdown. This will only inflict harm on the U.S. consumer.”

But those feuds were largely forgotten with the implementation on July 1 of NAFTA’s successor, the United States-Mexico-Canada Agreement. It is not a radical departure from NAFTA but more of an update, with provisions for digital trade, for example, that could not have been envisioned in 1994.

Simon Lester, associate director for the Stiefel Center for Trade Policy Studies at the Cato Institute, is still “wishy-washy” on the USMCA, but said he is “glad that the Trump administration didn’t withdraw from NAFTA.”

Other experts believe the deal is one of the best things the Trump administration has done. Hamer said that “every single sector of Arizona’s economy benefits from this agreement,” and credited Arizona Gov. Doug Ducey for his support of the negotiations.

“The fact that this (USMCA) has such strong, bipartisan support means that the Biden/Harris administration is going to embrace it and make sure that it is properly implemented,” Hamer said.

“The trade issues that he (Biden) does address are probably to be the ones that the Trump administration undertook that really aggravated some of our allies,” Lester said.

Hamer agreed that strengthening these relationships may be toward the top of the new administration’s agenda.

“The Biden/Harris administration wants to get back to the United States really developing deeper relationships with its natural allies,” Hamer said.

In an editorial for March/April edition of Foreign Affairs magazine, Biden harshly criticized Trump’s aggressive use of tariffs.

“Trump has designated imports from the United States’ closest allies – from Canada to the European Union – as national security threats in order to impose damaging and reckless tariffs,” Biden said.

Business leaders are optimistic about trade relations under a Biden administration, despite the president-elect’s pledge to include labor and environmental groups as part of any future trade talks.

“As president, I will not enter into any new trade agreements until we have invested in Americans and equipped them to succeed in the global economy,” he wrote in Foreign Affairs. “And I will not negotiate new deals without having labor and environmental leaders at the table.”

Biden said a top priority of his foreign policy agenda is to “place the United States back at the head of the table.” He said it is important the country enter into trade deals that protect middle-class wages, the environment, transparency and workers, and that the U.S. is the leader in these negotiations.

Zapanta is hopeful, but also realistic that it may take some time before any major changes happen.

“There’s a whole new regime coming in and the new administration, and that means that it’s going to take a while for them to really try to change” the overall trade situation, Zapanta said.