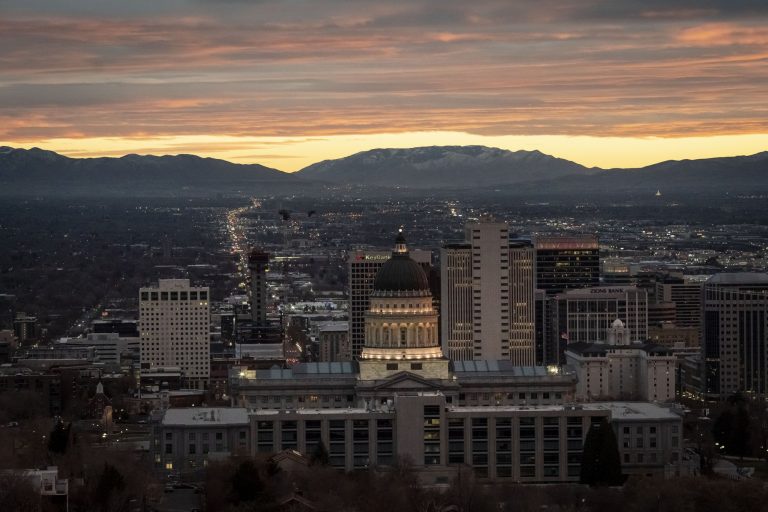 In one of the most corrosive presidential campaigns in recent American history, amid the political denunciations and slanders of an excruciating year, Utah’s top candidates for governor made a television commercial together.

It was not your typical political ad.

On the left side of the screen was Chris Peterson, the Democratic candidate, an affable man in a nondescript suit looking earnestly into the camera. On the right was Spencer Cox, his Republican opponent, with a similar suit and expression.

They cheerfully acknowledged that they disagreed on many things, but added something unusual for American politics in 2020.

“Win or lose, in Utah we work together,” said Peterson, who would be crushed in the November elections, a few weeks after the ad was released.

“Let’s show the country there’s a better way,” said Cox, who, a week after his victory, criticized fellow Republicans for attacks on the legitimacy of the elections.

This story was produced with the support of the Pulitzer Center on Crisis Reporting.

When it comes to politics, Utah has long claimed things are different here.

Political viciousness is for other places, many politicians will tell you. Legislators are more polite, more willing to compromise. The deep conservativism, the folklore says, includes a powerful strain of compassion.

It might make you wonder: With U.S. politics so divided that millions of voters are lost in a maze of conspiracy theories and outright lies, could a TV advertisement signal a place where they’ve figured things out?

Could this idiosyncratic state in the heart of the Rockies show America a better way? 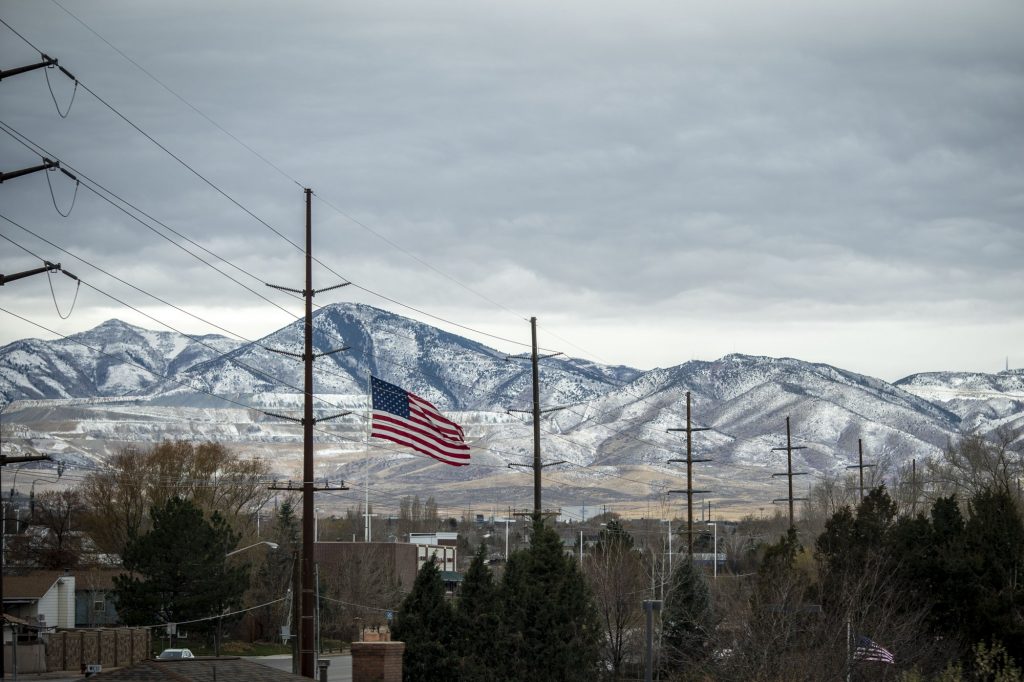 Salt Lake City turned out to be the end of the AP’s road trip, which took us across the country over the course of the summer and fall. Three of us have been trying to make sense of a year wracked by coronavirus, economic devastation, sometimes-violent protests for racial justice and an election campaign that ended with President Donald Trump, the clear loser, insisting that he’d been cheated out of victory.

A couple weeks earlier we’d been covering the presidential election from Wisconsin, bringing along gas masks and protective vests capable of resisting high-caliber handgun fire. There were widespread fears the state could be a flashpoint for political violence.

But now tactical vests were standard reporting tools for Wisconsin, the state where I’d gone to summer camp as a homesick kid? It didn’t seem possible.

We never needed the protective gear. There were a handful of scuffles in a handful of places, but the U.S. elections and the days that followed were largely peaceful.

Still, it made me want to find some good news. The year had offered so little.

So we came to Utah.

It didn’t take much poking around to realize that the state’s longtime reputation — overwhelmingly white, overwhelmingly Republican, dominated by a cultural conservatism inherited from the Church of Jesus Christ of Latter-day Saints — was only part of story. 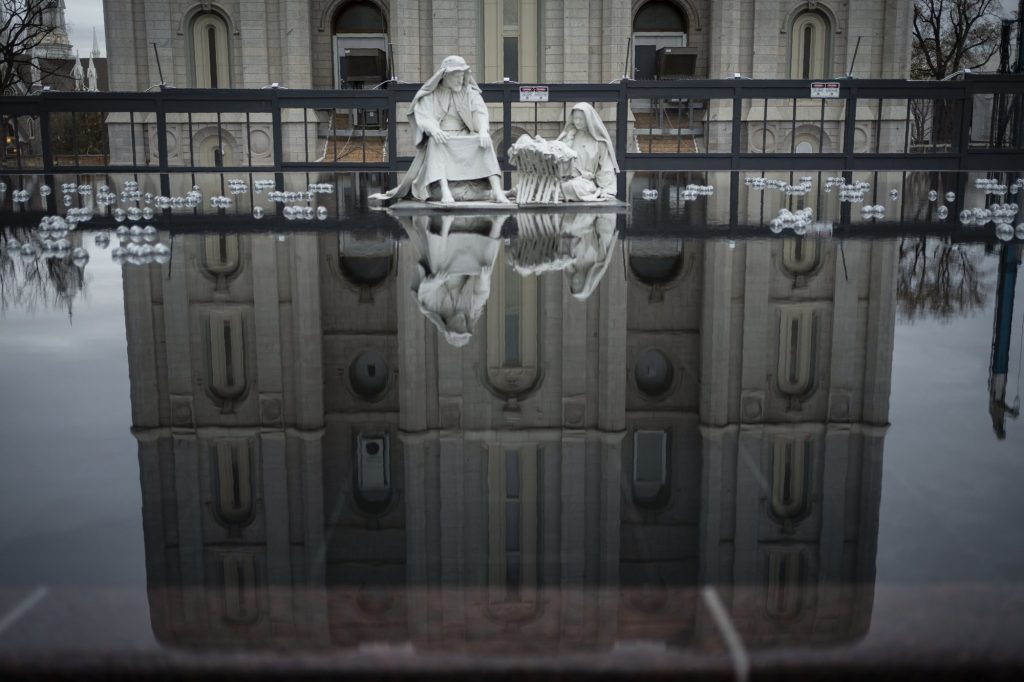 The Salt Lake Temple of The Church of Jesus Christ of Latter-day Saints is seen in a reflection in Salt Lake City, Sunday, Nov. 15, 2020

The other part is a surprising political complexity and slowly changing demographics. Utah, it turns out, is a place where right-wing Republicans have fought for the rights of undocumented immigrants and deeply religious legislators have enacted some of the nation’s strongest protections for gays and lesbians.

It is one of America’s most conservative states, both culturally and politically, but has one of its most liberal cities: Salt Lake City, with its throngs of Democrats, array of hipsters and, until she decided not to run again, an openly lesbian mayor.

It’s a state where so many people frown on alcohol that there are dozens of soda shops — Swig, Sodalicious, FiiZ, Quench It — to satisfy the relentless demand for carbonation and sugar (except on Sundays, when many are closed).

But two years ago, Utah also voted to legalize medical marijuana, and today you can pick up an Orange Creamsicle vape cartridge at a cannabis dispensary just a five-minute drive from Temple Square, the geographic heart of Utah’s Mormon culture.

What is going on? 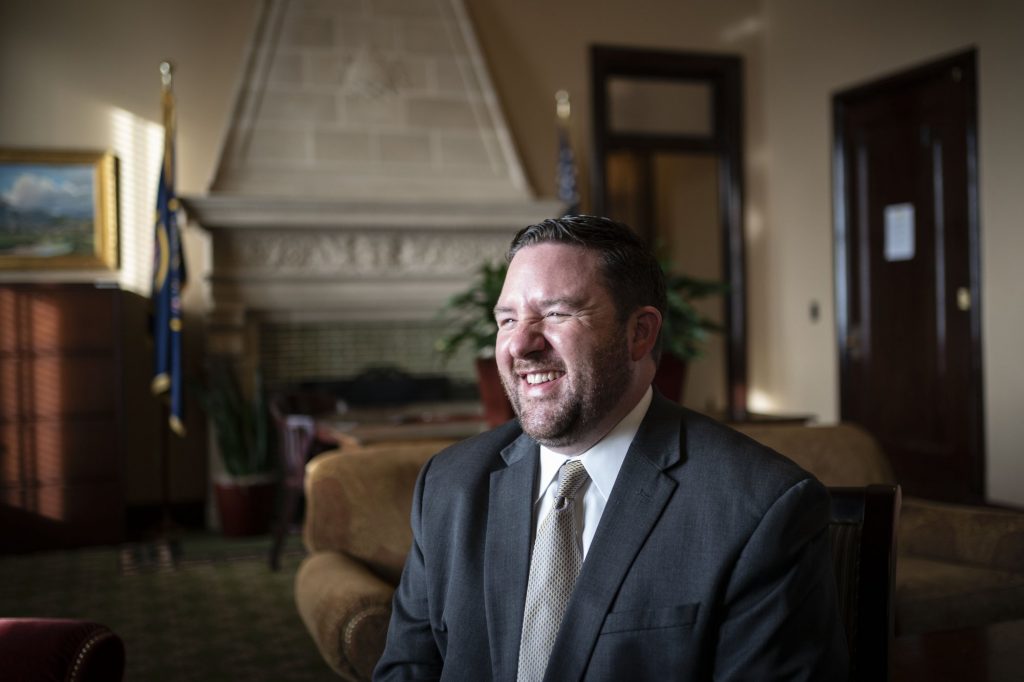 Rep. Robert Spendlove speaks during an interview in the Utah State Capital.

“I really do think it’s different in Utah,” said state Rep. Robert Spendlove, a Republican economist and proud policy wonk who spent years working in Washington and left unimpressed. “In Utah we really do have a sense of wanting to work together, to try to focus on shared interests and our policy objectives.”

“There’s some sense of working together and cohesiveness that I don’t think you find in other places,” said state Sen. Luz Escamilla, a Democrat who was raised in Mexico and is one of the state’s handful of elected Latinas. “There are levels of civility, of decorum, that are unique to the culture of the state. It can be helpful in terms of running a whole legislative session.”

But Utah culture also includes a powerful streak of conformist perfectionism, and generations here have faced the pressure of living up to the state’s mythological ideal: the relentlessly happy family with a string of polite, hard-working children.

As a result, at least some of the outward political civility is what people around here call Utah Nice, where viciousness can be hidden behind a fake smile and a batch of fresh-baked chocolate chip cookies. Picture one of those 1950s TV housewives, but with a bloody dagger beneath her apron.

Jim Dabakis, a former Democratic state senator, said he never faced a harsh word from a Republican during his years in office — but he said they still worked to quash pretty much every progressive bill he backed.

“This is a society of very passively aggressive people,” he said. “The levels of hostility and distrust and lack of respect is just as much in Utah as it is in New York.”

The legislative civility “is nothing to brag about,” said Dabakis.

He argues that the immense power of the Republican party has warped the state’s political culture. The party has crushing majorities in both the state House and Senate and has controlled the governor’s office for more than 30 years.

“It is simply one party that is in total, complete, absolute control and then saying, ‘We all get along so well,’” Dabakis said.

Many politicians acknowledge that Republican control sometimes fosters a phony politeness, but they’ll defend it too.

“To me it’s still better to have the facade,” said Republican Ray Ward. “If you keep the facade long enough then sometimes you can’t tell if that’s the real thing.”

Brian King, the Democratic House minority leader, added, “The Utah Nice thing, it can be superficial, but there can also be substance to it: It’s a method of getting from A to Z.”

King notes that Mormons are raised to see themselves as “peculiar people,” with a deep commitment to principled living.

“The downside is you can very easily and quickly fool yourself and rationalize poor behavior,” said King, who is a member of the faith. “I think that happens quite a lot here honestly.”

Off the record, some politicians acknowledge that politeness can mask political bullying. They’ll talk about the powerful legislative leader who stopped speaking to a colleague after a vaguely critical comment, and how the legislature took control of about 16,000 acres on the outer edges of Salt Lake City to create a trade zone. They’ll talk about how aggressive Republican gerrymandering has sliced and diced the state so that Democrats have no chance for victory in many legislative districts. 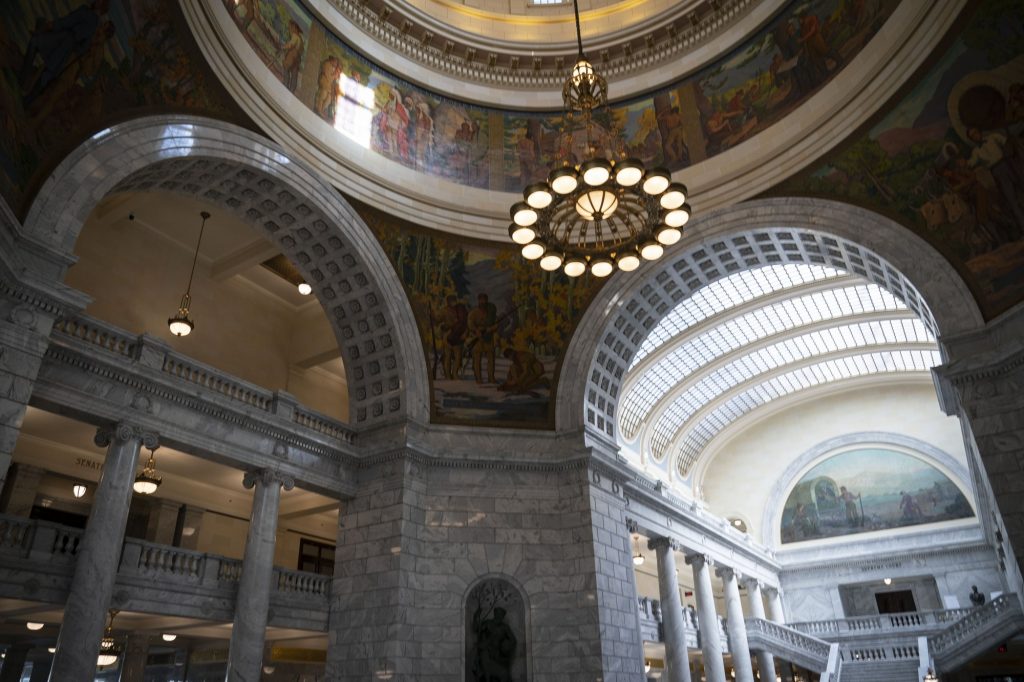 The interior of the Utah State Capitol in Salt Lake City.

In many ways, the state legislature, which remains overwhelmingly white, male and Mormon, doesn’t reflect the changing state it represents. Beyond the capital building, Utah is no longer a cliché of homogeneity. It has an increasingly large Latino population and growing numbers of other racial minorities, as well as ever more non-church members who come for Salt Lake City’s liberal vibe or, in a mountain-filled state, a flourishing outdoor culture.

Utah is no multi-ethnic, multi-religious melting pot — the state is still roughly 81% white and 62% Latter-day Saints — but those numbers are down considerably from a couple decades ago.

Often, though, that’s not how it feels.

“Utah feels so homogenous that if you’re an ounce of different — at all — whether it’s racially, politically, maybe you are a progressive feminist, whatever it is, you feel SO different,” said Sheryl Ellsworth, a Black woman who said people are regularly surprised to discover that she’s a Mormon.

Utah has become harder to pigeonhole, a state known both for its vegan restaurants and its hardline anti-government activists.

While Utah is more conservative than much of the U.S. on social issues like pre-marital sex and abortion, it has become a surprising defender of LGBTQ rights, with worker and housing protections, trans protections and a ban on so-called conversion therapy, discredited programs that claim to change sexual orientation. Polls show that Utah has some of the highest public support for LGBTQ-protection laws in the country — including among Mormons.

The Church of Jesus Christ of Latter-day Saints, which did much to mold the state’s ethos, also has become harder to pigeonhole.

While the church has traditionally been overwhelmingly conservative and Republican, today there’s also an increasingly large strain of liberal members. The church has also begun to directly address its history of racism, including a ban on Black priests that it lifted four decades ago. 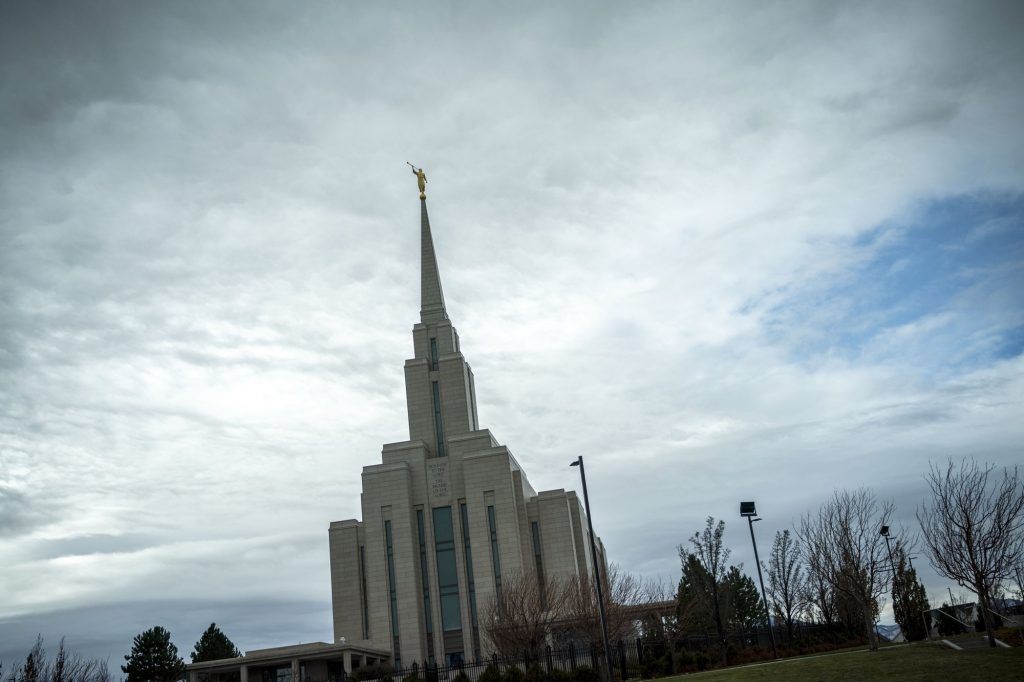 The Moroni statue on top of the Oquirrh Mountain Temple of the Church of Jesus Christ of Latter-day Saints is silhouetted against the sky in South Jordan, Utah.

The church’s history as a persecuted minority — believers arrived here in the 1800s fleeing bloody religious persecution from Ohio to Illinois to Missouri — also helps explain why many conservative Utahans are staunch defenders of immigrants and refugee rights.

This year, as the political atmosphere around the presidential elections grew ever more virulent, the church also urged its followers to avoid partisan rancor, and to accept the results no matter who won.

“We live in a time of anger and hatred in political relationships and policies,” President Dallin Oaks, one of the church’s most powerful leaders, said in an October speech. “As followers of Christ, we must forgo the anger and hatred.”

Rancor was what we expected to see when we set out across America, and there was no lack of it. We found abiding racial tensions in an Illinois “sundown town” where for years Black people were welcome only by daylight, and in rural Mississippi, where they still face obstacles to voting; we found distrust and discontent in Appalachian Ohio.

We also found Americans who struggled valiantly — two women building a family amid poverty; a Black man willing his wife from her COVID-induced coma; an immigrant who lost her job at a Las Vegas hotel due to the pandemic.

In Utah, we found something else: A place that seems to work — but maybe only because it’s Utah.

Founded by believers in what was then a small, fringe religion, Utah was then lost in the desolation of mountains and deserts, and viewed with suspicion by much of America.

The insularity that resulted has been fading over the past few decades, but it’s still a place marked by its distinctiveness.

Sometimes that distinctiveness means politicians more willing to get along. And sometimes it means the platitudes of Utah Nice.

So King, the House minority leader, can celebrate legislators finding common ground even as he grumbles about political superficiality.