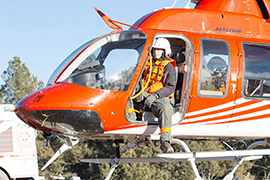 Where the program is now
Biologists in Arizona and New Mexico put boots on the ground to study wild Mexican wolves that live on both sides of the state line.

Nearly 1,250 miles west of the Endangered Wolf Center, the Apache National Forest in eastern Arizona is home to most of the wild Mexican wolves in the country.

In late January and early February, officials and biologists from Arizona Game & Fish in Alpine capture and examine wild Mexican wolves to gain more of an understanding of the current population and the progress of the cross-fostering program.

Game & Fish monitors 31 wolf packs by helicopter and tracking collars. This allows biologists to track the growth, location and progression of current packs while noting the creation of new packs.

“Since 2009, we’ve had an average annual increase of about 12%,” said Paul Greer, Mexican wolf interagency field team leader for Game & Fish. “The population has been cyclical up and down, but overall it’s an increasing population.”

Wolf biologists also have identified successes beyond the numbers. For example, biologists are seeing improvement of survival skills in cross-fostered wolves that they did not see in adult wolves that were released from captivity.

“So far, (cross-fostering) has been a better alternative to the release of adult wolves from captivity into the wild,” Fuller said. “We’re seeing a lot more wolves that understand how to be a wolf in this landscape because they were raised by wild parents.”

Although the cross-fostering efforts toward growing the Mexican wolf population have seen success, some critics of the program believe the process could be accelerated.

Sandy Bahr, director of the Sierra Club’s Grand Canyon Chapter, agreed cross-fostering has improved the Mexican wolf’s chances for survival, but she believes the introduction of captive adult wolves should resume.

“It (cross-fostering) can only be done on a pretty limited basis, because you have to have pups of the right age in the wild and in captivity,” Bahr said. “I agree that like a lone wolf might not be the best way to do it. That’s why we’ve really advocated for bonded packs. They’re much more likely to stay together. They can hunt together.”

Bahr said cross-fostering, in tandem with the release of adult wolves in packs, would increase the population more quickly than releasing adult wolves only.

“What (the Sierra Club) has said is release bonded packs, you know, release an alpha male and an alpha female,” Bahr said. “They’re much more likely to stay together, work together and survive versus what we’ve seen like with a lone wolf.”

Emily Renn, executive director of the Grand Canyon Wolf Recovery Plan, advocates for releasing adult wolves because they can add to the evolving genetic pool in a more immediate way.

“One of the things with the cross-fostered pups is it’s going to take at least two years before those wolves become adults and potentially become breeding wolves,” Renn said. “Obviously, it (releasing adult wolves) still needs a lot of consideration into how it’s done, but we want to see that included as an option.”

Progress so far
Although the recovery program has a long way to go before the biologist will call it a success, progress has been made by the steady increase in the Mexican wolf population.

Since the cross-fostering program began six years ago, Arizona Game & Fish has had success on multiple fronts.

According to the Mexican Recovery Wolf Program, about 50% of cross-fostered pups survive to reach prime breeding age.

The 2019 end-of-year census done by Game & Fish recorded the population of Mexican wolves had increased to 163 from 131. The department’s U.S. Southwest population goal is 320 wolves. The recovery plan also has set a goal for increasing the wolf population in Mexico to 200.

“Of the 12 wolves we released (in 2019), we’ve got four that have survived to breeding age and have already produced multiple litters of their own,” Greer said. “We’re seeing cross-fostered wolves surviving, breeding and producing multiple litters.”

Even with the success of the past few years, those close to Mexican wolf recovery programs aren’t quite satisfied.

“It’ll be nice one day if we can get the genetics up to where they need to be to be able to step back and let wolves be wolves,” Dwire said.

At what cost?
Saving an entire species is not something that can be done for free, but with funding from the government and generous donations, it is possible.

In 2018, expenses ran about $1.5 million at the nonprofit Endangered Wolf Center, which is funded mostly through donations. To support its work, donors can pay to “adopt” a single wolf or an entire pack for a month or a year. The center also participates in classroom outreach, where biologists discuss how wild wolves survive and what can be done to save them from extinction. Schools and after-school programs are charged $150 to $350 per session.

As for Game & Fish, the department puts about 7% of its budget into wildlife conservation, according to its 2018 budget breakdown.

Is it worth it?
There are more than 1,300 endangered species in the United States alone – what makes the Mexican wolf special?

More than 1,300 species in the U.S. are endangered or threatened and could use human help to avoid extinction. With so many plants and animals facing potential extinction, why save Mexican wolves specifically?

In fact, Mexican wolves have posed a threat to ranchers and livestock since Europeans first settled the Southwest. As the wolf population has edged up each year, so have ranchers’ anxieties.

However, Mossotti said, the Mexican wolf may play a bigger factor in the environment than seen at first glance. It’s classified as an “umbrella” species, she said, meaning the wolves affect a good portion of the ecosystem just by going about their business.

Mossotti compared the effect that the recovery of Mexican wolves has on the environment to a similar project the Endangered Wolf Center was a part of at Yellowstone National Park.

After scientists found no evidence of wolves in Yellowstone National Park for decades, the U.S. Fish and Wildlife Service began a wolf reintroduction program in 1995.

“When we released wolves in Yellowstone,” Mossotti said, “they had been extinct in the park for decades, and the park changed without them there. Elk population skyrocketed, deer population skyrocketed and they ate everything. They ate all the plants down to the dirt. When trees would fall, no new trees would replace them. Those trees and shrubs … provided habitat for birds and butterflies and lots of animals.”

Mossotti said the reintroduction of wolves to the park brought the elk and deer populations down to sustainable levels and allowed the plants to recover enough to provide for other animals that were suffering without them.

“To put all this energy into the wolf is ultimately to help make sure the ecosystem is healthier for everybody,” Mossotti said.