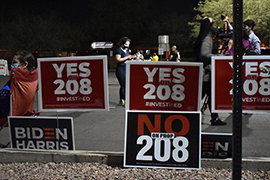 Arizonans were heavily invested in this fall’s elections in more ways than one, donating a total of at least $110 million to support candidates and high-profile ballot initiatives.

That was a sharp increase from the $60 million that state voters donated just four years ago. And the increases this year were seen across the board, with Arizonans opening their wallets for presidential as well as federal and state campaigns.

“People on both sides obviously felt extremely passionate about the presidential and Senate elections,” said Jason Rose, a Republican political consultant in Arizona. “They saw an opportunity to effect change this way.”

The surge in giving was driven by unusually high interest in the presidential and Senate races and Arizona’s newfound status as a battleground state. While that drew large amounts of money from out of state, it apparently inspired state residents to contribute more, too.

Democrats appeared to be especially motivated, donating to what turned out to be successful campaigns for president and for Senate.

President-elect Joe Biden’s victory over Trump was the first time the state had voted for a Democratic presidential nominee since 1996. And Sen. Mark Kelly, a Democrat, unseated Republican Sen. Martha McSally to give the state two Democratic senators for the first time since the 1950s. It also brought Democrats one seat closer control of the Senate.

“The Arizona Senate race was one of the few opportunities where Democrats were seen as potentially able to flip a Senate seat,” said Kim Fridkin, foundation professor of political science at Arizona State University.

“Since the U.S. Senate race between McSally and Kelly was for control of the U.S. Senate potentially, this played into the reason why there was so much spending,” Fridkin said.

The race between Kelly and McSally was the most expensive in state history, with the two candidates raising a combined $173.9 million. While most of that came from out of state, Arizona donors accounted for $17.4 million of the total, with Kelly raising $9.4 million in state and McSally getting $8 million, according to their most recent Federal Election Commission filings.

In-state Senate donations this year were eclipsed by contributions to the general election candidates in the hotly contested presidential race, with OpenSecrets.org reporting that Arizonans gave a total of $29.4 million to Trump and Biden. In 2016, the presidential campaigns of Trump and Democratic challenger Hillary Clinton raised just over $7 million in Arizona.

Biden, who got into the race relatively late, raised $12.9 million in the state this year to Trump’s $16.5 million as of early December reports. Those numbers do not include millions more donated by Arizonans to the crowded field of Democratic presidential hopefuls before Biden sewed up the field.

“Arizona was a battleground state in the presidential campaign and it was seen as a pathway for victory for both Biden and Trump,” she said.

Down ballot, donations from individual Arizonans to campaigns for state office also soared, according to data from the Secretary of State’s website. It said contributions rose from $13.5 million in 2016 to $23.3 million this year, an increase Fridkin also attributed to competitive races.

“I do believe that control of the state Senate and the state House depended upon flipping a few seats, so this is why there was a lot of spending at that level,” she said.

This year’s ballot initiatives also drew large donations, for and against. Proposition 207, which legalized marijuana use in the state, and Proposition 208 which raised income taxes for people with an income of $250,000 or more, were mostly funded with in-state donations.

Rose said large amounts were raised against Proposition 208 in particular, since some Arizonans “think that 208 is the worst thing that they’ve ever seen.”

“There was $18 million raised largely by individuals against Prop. 208, and it just came up a little short. So that’s certainly mobilized deep-pocketed donors,” he said.

But the overall initiative fundraising in 2020 was not significantly higher than in 2016, when another marijuana question and a proposal to raise the minimum wage were on the ballot. Arizonans donated $30.4 million for those campaigns, compared to a total of $32 million this year.

Both Rose and Fridkin said voters gave because they were invested in the issues this fall, and they got more invested as more people gave.

“In general, a lot of people were very engaged in the campaign at all levels this year, and this led to more fundraising and spending and the historic levels of turnout.” Fridkin said.