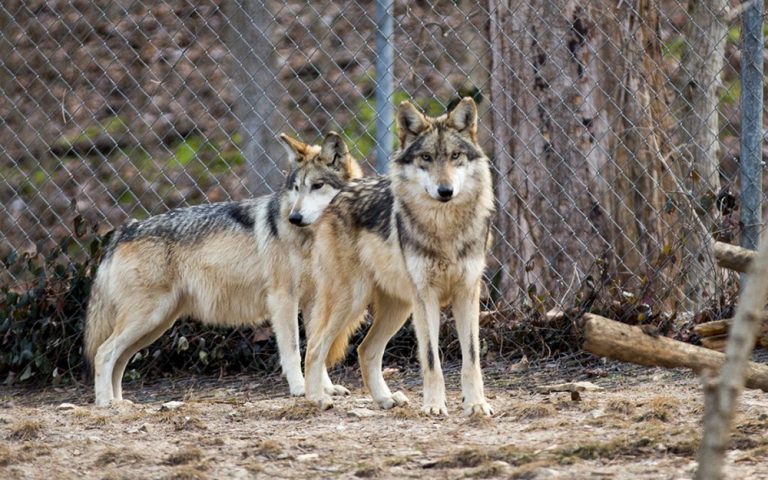 The day in late January began like any other for a Mexican wolf pup living in the spectacular solitude of eastern Arizona: searching for food with other wolves in the Apache National Forest.

Then came the terrifying chatter of a helicopter, a dash for cover, a jab in the rump – and a nap, courtesy of the sedative Telazol, delivered by dart gun.

After being transferred by helicopter to a remote location just outside Alpine, the 10-month old male was rushed into a warm, compact trailer where a team of biologists quickly analyzed him.

What they discovered thrilled them.

The capture of this wolf pup – later named mp-1858 – reaffirmed to the team that a decades-old, multistate, multiagency effort to help save the Mexican wolf population has made strides.

The biologists placed so much significance on mp-1858 because he was born in the wild, and he left his pack to tag along with a female and male Mexican wolf, possibly laying the foundation of a new pack.

The team has spent years placing new-born wolf pups in wild dens – a practice known as cross-fostering – but team members ultimately hope to see an increase in natural-born Mexican wolves, such as mp-1858, to help diversify the wolf population and raise its numbers. 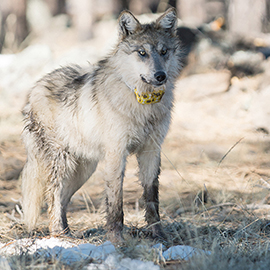 “We’ve got a pretty good handle on who’s who, but the individual we caught today is a little different,” said Maggie Dwire, deputy Mexican wolf recovery coordinator for the U.S. Fish and Wildlife Service. “We’re not sure why he was running with the group of wolves that he was with. So that kind of thing is really neat, right?”

Because mp-1858 was born in the wild, he’s exactly what those striving to boost the Mexican wolf population want to see.

Government agencies, including the Arizona Game & Fish Department, and the private Endangered Wolf Center in Missouri have invested millions of dollars and decades worth of research to save the Mexican wolf from extinction. Those efforts included breeding and releasing adult wolves into the wild, but that program has been placed on the back burner, replaced over the past six years by the cross-fostering program.

Every year, they team up to count wolves to evaluate their progress.

“The primary objective for this operation is to get a good count of the wolves that are out there,” said Genevieve Fuller, a wolf biologist with Arizona Game & Fish. “Secondary objective is to capture any animals that are deemed targets” – meaning any wolf found in a counting area.

To researchers, mp-1858 is a wolf that could symbolize the next phase of wolf rehabilitation.

Where it all started
Since its doors opened in 1971, the Endangered Wolf Center in Eureka, Missouri, has played a huge role in saving the Mexican wolf, through the release of captive-bred adults and cross-fostering pups into the wild.

Biologists traced mp-1858’s roots to the Endangered Wolf Center in Eureka, Missouri. Center officials said he likely is the offspring of adult wolves raised and released by the center or the offspring of cross-fostered wolves born in captivity and placed in dens by biologists.

The center has led the Mexican wolf cross-fostering program since it began in 2014. Founded almost 50 years ago, it sits on 63 isolated, wooded acres of a former military munitions area southwest of St. Louis, and is part of the Washington University Tyson Research Center. The center was constructed to match the cold, silent and humanless habitat where Mexican wolves live.

The center’s goal is to boost the genetic diversity and population of wolves through cross-fostering, in which 8- to 14-day-old pups born in captivity are placed in a den of similar-aged wild pups in remote areas of the Southwest.

“When we are looking at fostering pups to the wild, the captive program has a lot of different genetics than what the wild population has,” said Regina Mossotti, director of animal care and conservation at the Endangered Wolf Center. “So being able to take puppies from facilities like the Endangered Wolf Center and sneaking them into wild litters is a great way for us to be able to get new genetics out into the wild to help keep that wild population healthier.”

Mexican wolves breed in April and May, leaving a narrow window for cross-fostering.

“Fostering can be incredibly challenging in its own right,” Mossotti said. “The stars, the moon, the planets, everything has to align to make it happen.”

To successfully cross-foster a wolf pup, officials must identify a wild wolf that has given birth about the same time that a female wolf in captivity at the center gives birth.

When that does happen, the clock starts ticking.

“We have to be able to find a flight, the weather has to work and we have to have enough people to do it,” Mossotti said. “So all these things, these logistics have to come together to make it happen.”

Once the team from the Endangered Wolf Center arrives in Arizona, Game & Fish employees join them on a hike to a specific wolf den, often hidden in the rugged terrain along the Arizona-New Mexico state line.

The team carefully places the captive wolf pups, fitted with tracking collars, into the wild den and leaves them to their new lives.

Being part of the cross-fostering process “is so worth it,” Mossotti said. “To know that you’re helping release these puppies in the wild to give them that chance of freedom to help save a critically endangered species, there’s nothing better.”

In 1977, the Mexican wolf population in the U.S. was down to just seven. The center initially released adult Mexican wolves directly into the wild before adopting cross-fostering in 2014. Although the direct-release program was considered a success, biologists don’t plan to resume it unless absolutely necessary.

“We wouldn’t have the Mexican wolf program today if it (releasing adult wolves) didn’t work,” Mossotti said. “But you are releasing naive adults, and that can take them a little bit of time to get used to the area they’re in and to establish a territory.”

The Endangered Wolf Center opened its doors in 1971 when American zoologist Marlin Perkins and his wife, Carol, set out to address the endangerment of several species of wolves.

Virginia Busch, executive director of the Endangered Wolf Center, said wolves were a favorite animal of Perkins, the longtime host of TV’s “Wild Kingdom,” who died in 1986.

“We’re really proud that Marlin, even before the Endangered Species Act, had the forethought to build such an institution,” she said.

At the time of the center’s opening, the only captive Mexican wolves were being held at the Arizona-Sonora Desert Museum in Tucson. The only remaining captive female, Nina, was transferred to Missouri after failing to breed with any of the males.

In 1981, Nina mated with one of the last wild-caught wolves and gave birth to the first wolf pups conceived in captivity, according to the center.

“Our goal at the Endangered Wolf Center as well as through the species survival plan programs is to continue to breed those animals and have a healthy population,” Busch said. “For Mexican wolves, we are doing just that.”

As of 2020, Mexican wolf pups have been cross-fostered from centers across the country, including the Wolf Conservation Center in New York and the Sedgwick County Zoo in Wichita, Kansas.