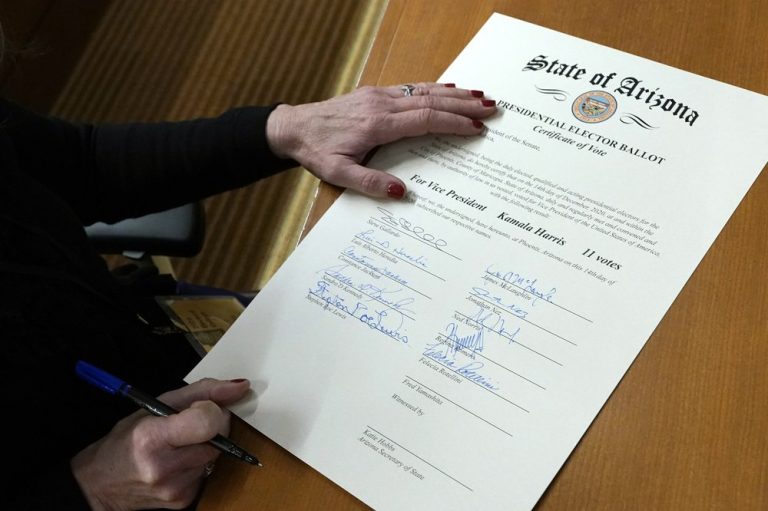 Arizona’s 11 Electoral College members cast their votes for Democrat Joe Biden and running mate Kamala Harris Monday, following state law that requires delegates from the party whose candidates received the most votes to back the winning candidate.

The 11 electors chosen by the Democratic party were charged with representing Biden after he won the Nov. 3 presidential election in Arizona by nearly 10,500 votes. Biden was the first Democrat since President Bill Clinton in 1996 to carry the traditionally Republican state.

The vote came as some Arizona Republicans continue to question Biden’s victory over President Donald Trump. Trump backers have filed multiple lawsuits trying to have the Arizona results set aside but state and federal courts have rejected all but one of them. Some are being appealed and the remaining case has a hearing Monday.

The meeting of the Electoral College normally takes place at the Capitol but was held offsite at a location not publicly disclosed because of concerns about protesters. A handful showed up at the Capitol but no incidents were reported.

Members of the Electoral College met across the nation Monday, and by mid-afternoon Biden’s win was formalized when he crossed the 270 vote threshold to secure the presidency.

A state Senate panel chaired by a Republican also held a hearing on the election Monday, although it can do nothing to reverse the Electoral College delegates’ votes.

Some Republicans have called for the Legislature to override voters and seat electors who will back Trump. But GOP leaders of the House and Senate have said they don’t have the power to retroactively change Arizona law requiring the seating of delegates and the mandate that they back the winning candidate.

Democratic Secretary of State Katie Hobbs presided over the ceremony where the electors signed the certificates that confirmed Biden’s win. She had harsh words for the politicization of this year’s process, which she says is normally held amid pomp and circumstance and reverence for the American political system.

“This year’s proceedings … has unfortunately had a artificial shadow cast over it in the form of baseless accusations of misconduct and fraud for which no proof has been provided and which court after court has dismissed as unfounded,” Hobbs said.

In a sign of continuing GOP failure to acknowledge Biden’s victory, the state Republican Party gathered would-be Trump electors for a symbolic “vote” certifying his “win” in the state and said they would send those votes to Congress.

A few hours after the actual Electoral College vote, an election official argued for the dismissal of a lawsuit in Pinal County that seeks to decertify Biden’s victory in the state.

The challenge brought by Staci Burk, who isn’t a lawyer but is representing herself, is nearly identical to a lawsuit dismissed last week in federal court in Phoenix.

Burk’s suit alleged Arizona’s election systems have security flaws that let election workers and foreign countries manipulate results. Opposing attorneys said the lawsuit used conspiracy theories to make allegations against a voting equipment vendor without any proof to back up its claims of widespread election fraud in Arizona.

Roopali Desai, an attorney for Democratic Secretary of State Katie Hobbs, said the state’s Electoral College votes had already been cast and that Burk fails to meet a key requirement for contesting elections — she claimed in her lawsuit that she was a qualified Arizona voter, when she was in fact not registered to vote in the election that she is now challenging.

Burk said she thought “qualified electors” were people who were merely eligible to vote. She said her voter registration was canceled because election workers were unable to verify her address.

At the Legislature, the Senate Judiciary Committee heard testimony from Maricopa County officials who said the election was held fairly and without major issues despite the multiple failed lawsuits alleging otherwise. And two members of the state attorney general’s election integrity unit briefed lawmakers on “dozens” of investigations they were conducting into potential illegal voting, although they noted that there were nowhere near enough votes in question to change the outcome.

“All of that points to the fact the election that we just had, and the 11 electoral votes that were just cast earlier this morning, were legit,” Democratic state Sen. Martin Quezada said. “They were completely and totally legit. Nobody is hiding anything.”

Republicans on the committee weren’t convinced, and Republican Sen. Eddie Farnsworth said he would issue subpoenas requiring the state’s largest county to do an audit of the election counting machines.