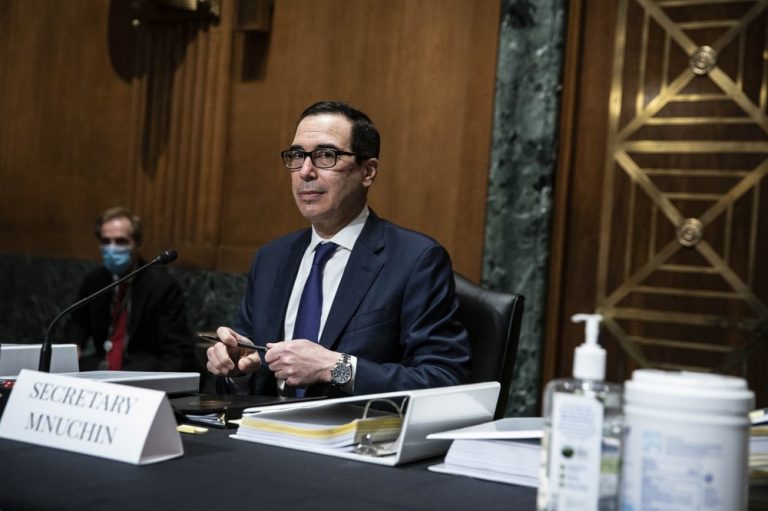 An emerging $900 billion COVID-19 aid package from a bipartisan group of lawmakers all but collapsed Thursday after Senate Majority Leader Mitch McConnell said Republican senators won’t support $160 billion in state and local funds as part of a potential trade-off in the deal.

McConnell’s staff conveyed to top negotiators that the GOP leader sees no path to an agreement on a key aspect of the lawmakers’ existing proposal — a slimmed-down version of the liability shield he is seeking for companies and organizations facing potential COVID-19 lawsuits — in exchange for the state and local funds that Democrats want.

The GOP leader criticized “controversial state bailouts” during a speech in the Senate, as he insists on a more targeted aid package.

The hardened stance from McConnell, who does not appear to have enough votes from his Republican majority for a far-reaching compromise, creates a new stalemate over the $900-billion-plus package, despite days of toiling by a bipartisan group of lawmakers to strike compromise.

McConnell’s office confirmed it’s “unlikely” the trade-off proposed by the bipartisan group would be acceptable, as COVID aid talks continue. A senior Democrat first shared the Republican leader’s views after being granted anonymity to discuss the private conversations, which were first reported by Politico.

Deadlines, real and perceived, haven’t been sufficient to drive Washington’s factions to an agreement, despite the U.S. breaking a record-high 3,000 daily COVID fatalities, and hospitals straining at capacity from soaring caseloads nationwide.

The House recessed for a few days, with leaders warning members to be prepared to return to Washington to vote on the year-end deals, while the Senate was planning a rare Friday session.

The breakdown over the COVID aid package, after days of behind-the-scenes talks by a group of lawmakers fed up with inaction, comes as President Donald Trump has taken the talks in another direction — insisting on a fresh round of $600 stimulus checks for Americans.

Sending direct cash payments to households was not included in the bipartisan proposal, but has been embraced by some of the president’s fiercest critics — including Rep. Alexandria Ocasio-Cortez, D-N,Y., and Sen. Bernie Sanders, the Vermont Independent who introduced an amendment to include the checks with Trump ally Sen. Josh Hawley, R-Mo.

“I think we’re making a lot of progress,” Mnuchin said.

A one-week stop-gap measure to prevent a federal shutdown appears to have sapped some urgency from the talks. The short-term government-wide funding bill, approved by the House on Wednesday, needs to clear the Senate before Friday at midnight to avert a partial closure.

The next deadline would be Dec. 18, but both House and Senate leaders say they won’t adjourn without passing an aid measure.

House Speaker Nancy Pelosi, D-Calif., said Congress would keep working up to or even after Christmas to get an agreement. The new Congress is being sworn in on Jan. 3.

“Now if we need more time then we take more time, but we have to have a bill and we cannot go home without it,” Pelosi said. She also gave an upbeat assessment on the talks.

The bipartisan lawmakers held another virtual “dinner group” meeting late Thursday to try to prop up the deal. They have been working furiously to try to bridge the stalemate over COVID aid.

A key hold up has been the standoff over more money for the states, that Democrats – and some Republicans – want and the liability shield that is McConnell’s top GOP priority but that most Democrats oppose.

The partisan group tried to marry those two provisions as a compromise.

McConnell had initially proposed a five-year liability shield from virus lawsuits, retroactive to December 2019, but the bipartisan group was eyeing a scaled-back shield of six months to a year. Labor and civil rights groups oppose any shield, which they say strips essential workers of potential legal recourse as they take risks during the pandemic.

Democratic leaders had wanted far more in state and local aid, but were accepting of the lower $160 billion.

But many Republicans have long viewed the state and local aid as a bailout they would have trouble supporting, despite the pleas for funds coming from governors and mayors nationwide.

Late Thursday, Sen. Dick Durbin and other Democrats pitched another liability proposal to the bipartisan group, but it was rejected by Republicans, according to a Senate aide granted anonymity to discuss the private session.

The Trump administration is back in the middle of the negotiations with a $916 billion plan. It would send a $600 direct payment to most Americans but eliminate a $300-per-week employment benefit favored by the bipartisan group of Senate negotiators.

The White House offer has the endorsement of the top House Republican and apparent backing from McConnell, who had previously favored a $519 billion GOP plan that has already failed twice. But Democrats immediately blasted the plan over the administration’s refusal to back the partial restoration, to $300 per week, of bonus pandemic jobless benefits that lapsed in August.

President-elect Joe Biden is pressing for as much pandemic relief as possible, though he’s not directly involved in the talks. McConnell, like Pelosi, says Congress will not adjourn without providing the long-overdue COVID-19 relief.

Republicans say the right people to handle final negotiations are the four leaders of Congress and the Trump administration, with the focus on the streamlined proposal from McConnell, R-Ky.

The bipartisan negotiating group — led by Democratic Sen. Joe Manchin of West Virginia and GOP Sens. Susan Collins of Maine and Lisa Murkowski of Alaska, among others — was seeking to rally lawmakers behind the $908 billion framework that includes the $300-per-week pandemic jobless benefit and $160 billion for states and local governments.

It also includes a four-month extension of jobless benefits set to expire at the end of the month, $300 billion for “paycheck protection” subsidies for struggling businesses, funding for vaccines and testing, and a host of smaller items such as aid to transit systems, the U.S. Postal Service and health care providers.