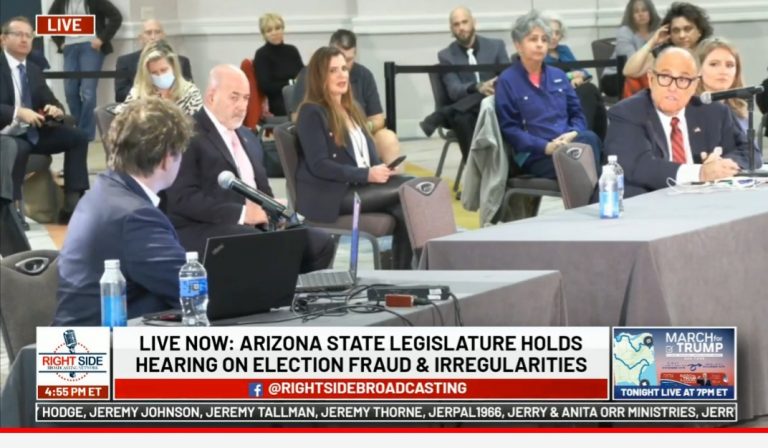 [Reprinted with permission from the American Post-Gazette – Editor]

What came out of the November Hearing on Election Integrity, the hearing that the Governor portrayed as nothing more than a “meeting,” was a call to formal hearings and special session based on evidence, not on speculation. In the pyramid of proofs, the first hint of illegitimate action is a “reasonable scion,” then there is “probable cause,” which is enough for an arrest if the action is a crime. Then comes a “preponderance, “ the “clear and convincing,” and finally, “beyond a reasonable doubt.”

The evidence presented at last Monday’s hearing showed at the very least probable cause to believe that Arizona’s election was irredeemably defective because of pervasive fraud. Most notable was the evidence showing “fractional calculation” which recorded votes not as whole numbers, but as fractions. The last time I checked, we don’t have partial people voting, factions maybe, but not fractions.

The text of the petition to Speaker of the House Russell Bower and President of the Senate Karen Fann is based on the foundation of Constitutional law, and upon This petition shall serve as notification to Governor Douglas Ducey and Secretary of State Katie Hobbs that an emergency exists such that a special session of the Legislature must be called for and convened on Thursday, December 10, 2020, at 10:00 A.M. in order to attend to such emergency and for all purposes provided for pursuant to Article II, Section 1 of the Constitution of the United States.

I will walk you through the Constitutional foundation upon which the claim fraud must rest. Article I, Section 4 of the Constitution of the United States provides that “[t]he Times, Places and Manner of holding Elections for Senators and Representatives shall be prescribed in each State by the Legislature thereof; but the Congress may at any time by Law make or alter such Regulations, except as to the Places of choosing Senators.” Under Article II, Section 1 of the Constitution of the United States provides, in pertinent part, that “[e]ach State shall appoint, in such Manner as the Legislature thereof may direct, a Number of Electors, equal to the whole Number of Senators and Representatives to which the State may be entitled in the Congress.” Finally, the Supreme Court of the United States has described such constitutional authority of the State Legislatures to determine the manner of choosing electors as “plenary.” See McPherson v. Blacker, 146 U.S. 1, 35 (1892); see also Bush v. Gore, 531 U.S. 98, 104 (2000). The legal term of art, “plenary power,” is defined as complete and absolute power to take action over a particular area with no limitations.

Next we must turn to Section § 5 of Title 3 of the United States Code, which provides: “If any State shall have provided, by laws enacted prior to the day fixed for the appointment of the electors, for its final determination of any controversy or contest concerning the appointment of all or any of the electors of such State, by judicial or other methods or procedures, and such determination shall have been made at least six days before the time fixed for the meeting of the electors, such determination made pursuant to such law so existing on said day, and made at least six days prior to said time of meeting of the electors, shall be conclusive, and shall govern in the counting of the electoral votes as provided in the Constitution, and as hereinafter regulated, so far as the ascertainment of the electors appointed by such State is concerned.” Title 16 of Arizona Revised Statutes (hereinafter, the “Arizona Election Code”) sets forth the rights and procedures for an election contest in Arizona as enacted by the Legislature pursuant to its plenary power under Article II, Section 1 of the Constitution of the United States (hereinafter, “plenary power”).

Now for the evidence. Testimonial and other evidence given before an Election Integrity Hearing held on November 30, 2020, demonstrated a systemic failure to observe the Arizona Election Code enacted by the Legislature in ways that include, but are not limited to, the following:

Any certification of electors based upon such fraudulent activities results in a disenfranchisement of Arizona voters who cast legitimate ballots and it is the responsibility, and the duty uniquely placed upon the Arizona Legislature to right such wrongs. Any certification of electors by the Governor of Arizona or the Arizona Secretary of State in light of such systemic failures would not be in conformity with the Arizona Election Code enacted by the Legislature pursuant to its plenary power. To be crystal clear, the Supreme Court of the United States in Bush v. Gore, 531 U.S. 98 at 104, has held that a state legislature, “after the granting the franchise in the special context of Article II, can take back the power to appoint electors”; and Article II, Section 1 of the Constitution of the United States does not prescribe any procedural limitations or criteria relating to a state legislature’s exercise of its plenary powers under said provision.

The Legislature’s ability to take back the power to appoint electors is not conditioned or dependent upon whether it is in convened in a session at the time when the need to take back such power arises. It is within the plenary authority of the Legislature to convene, untethered by prior statutory limitations that the Legislature may have placed upon itself. To do anything less is an abandonment of the Oath of Office to support and defend the Constitution of the United States against all enemies foreign and domestic. Because of the stench of fraud that surrounds our election, it is imperative that the Electors from Arizona be recalled immediately. The Governor could do that with the stroke of a pen, but sadly, like everything else he has done, Doug Ducey will chose to serve himself instead of the vast majority of voters who thought their vote would count. Just like the selfish “thumbs down” act of John McCain on the ACA vote, Doug Ducey will be relegated to the ash heap of history, disgraced for shirking his duty.