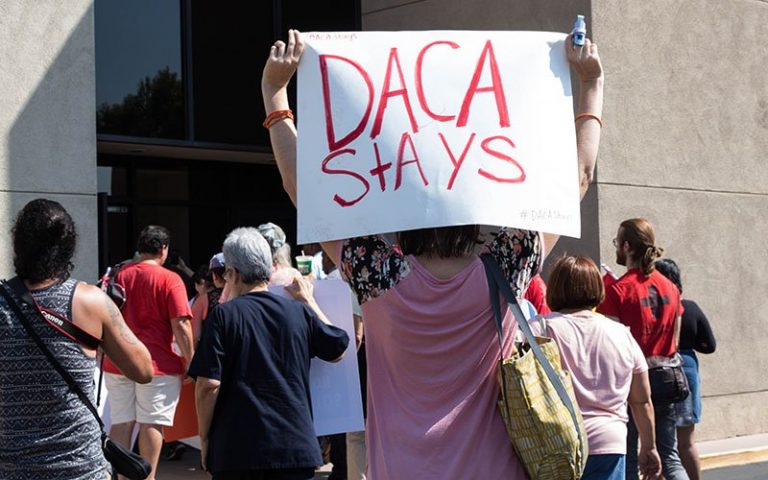 The Trump administration said Monday it will abide by a court order – for now – to start accepting new Deferred Action for Childhood Arrivals applications, a move that could affect an estimated 682,000 undocumented immigrants.

The Department of Homeland Security is already looking to appeal the Friday court ruling, but advocates for immigrants were celebrating the decision that they called critical to the lives of DACA recipients, including thousands in Arizona.

“A lot of young people are going to be able to get deferred action so they won’t be eligible for deportation if they follow the rules, they’re going to get work permits and the ability to work and contribute to their household,” said Jose Patiño, a DACA recipient and education director at Aliento, an immigrant advocacy group in Phoenix.

The decision could affect 1.3 million people in the U.S., according the Migration Policy Institute, which said about 682,000 have yet to apply for DACA protection. In Arizona, the ruling has the potential to almost double the number of DACA recipients, from the current 24,140 to an estimated 47,000 in the state who could be eligible.

The Obama-era policy defers deportation for immigrants who were brought to this country illegally as children and have known no other home, allowing them to get driver’s licenses, work permits and Social Security numbers. It lets them “feel like they’re part of the country,” Patiño said Monday.

Then-candidate Donald Trump targeted the program, which was enacted as a policy change and not by law, as presidential overreach and promised to do away with it if elected. On Sept. 5, 2017, then-Attorney General Jeff Session did just that, announcing plans to “wind down” DACA over a six-month period, during which the administration invited Congress to enact DACA as law.

Congress did not, but the proposal to end DACA was challenged almost immediately in court. It ultimately landed in the Supreme Court, which ruled that the administration had not followed the proper procedures to rescind the program.

In response to that ruling, Acting Homeland Security Secretary Chad Wolf issued a July 28 memo that blocked new DACA applications and cut the length of DACA coverage from two years to one, among other changes.

The “Wolf memo” was vacated Friday by U.S. District Judge Nicholas G. Garaufis, of the Eastern District of New York, who had ruled in November that Wolf had not been properly appointed to his job and was “without lawful authority” when he issued the memo.

Garaufis ordered DHS to return to the way it was in September 2017, and gave the agency until Monday to comply. DHS did so – grudgingly.

“DHS wholly disagrees with this decision by yet another activist judge acting from his own policy preferences,” DHS spokesperson Chase Jennings wrote in an email. “We will abide by this decision while we work with DOJ (the Department of Justice) on next steps to appeal.”

David North, a fellow at the Center for Immigration Studies, which advocates for stricter immigration laws, said it would be in character for DHS to appeal the decision, but there’s “so little time left” to do so.

“This is the start of a new chapter,” North said. “I think the judge would fall off his bench if he discovered his ruling was not appealed.”

But Maurice Goldman, an immigration lawyer in Tucson, said Garaufis’ decision gives hope to a population that has been in limbo the past three years while the future of DACA has worked its way through the courts.

“The good news is it shows the courts can be a strong ally in attempts to push back against the government, the administration on certain policies,” Goldman said. “It’s a refreshing decision in a time where there’s a lot of bad news out there for people who I represent.”

President-elect Joe Biden has pledged to reinstate DACA, and push Congress to enact its protections into law. But Goldman is urging his clients not to wait.

“We’re advising people to get their evidence together as we wait for the department to finally act on it,” he said. “But with the caveat that we cannot guarantee what the current administration is going to do with these applications.”

North said there are a few possibilities: Congress and the Biden White House could make DACA law, DACA recipients could be added to a larger pathway to citizenship program, “or, in the grand tradition, nothing may happen.”

Patiño hopes that a new White House and Congress will pass legislation, so “we don’t have to keep going in limbo” and so that the more than 600,000 DACA recipients in the U.S. “can have some security.”

“Many of my friends have been able to buy homes, start businesses … get more advanced degrees, Patiño said. “Without DACA, none of us would be able to do that because you had the constant threat of deportation.”

PrevPreviousNew White House offer adds $600 checks to COVID-19 relief
NextGet Ready for Taxes: What’s new and what to consider when filing in 2021Next