Since their founding in  1977,  CTC has been an advocate for county taxpayers and promoted  transparency and  accountability in local government. In recent years they have been  active in voter education efforts with respect to school bonds, budget overrides and the  flawed Public Safety Personnel Retirement System. They are currently examining the proposal to build a new jail in Prescott.

Investigative reporter Bill Williams was the guest speaker.  He brought members up to date on  the status of his pending lawsuit against the county to stop construction of a jail on what may be a brownfield.  Mr. Williams is the plaintiff in a pending lawsuit seeking an injunction to stop construction of a new 120  bed jail in Prescott next to a county owned landfill and sewer treatment plant on Prescott Lakes Parkway. 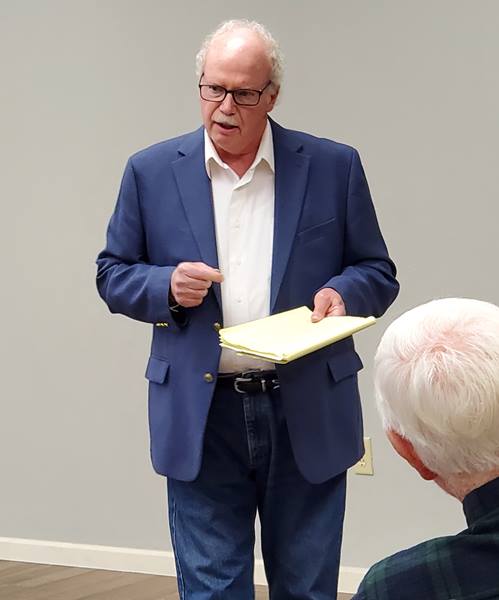 The lawsuit  against the county, (Williams v. Rowle Simmons, et al.)  alleges that the proposed construction site is contaminated by hazardous waste from prior industrial uses and is effectively a brownfield.  Known prior uses of the site include a saw mill, a truck storage and repair facility, and a shooting range. The site  was purchased by the county in 2011 for 2.8 million dollars and used as a shooting range before being abandoned without remediation of lead particles and other contaminates.

According to Williams, the environmental issues associated with the site were not fully investigated by the county Board of Supervisors before they approved the jail project. Nor were they disclosed to  the public until Williams’ filed his lawsuit and local citizen groups opposed to the jail began to ask questions.  Williams says it is not clear if the recommendations  contained in a 360 page Environmental Assessment, for which the county paid $41,000, were fully implemented.

The Arizona Department of Environmental Quality (ADEQ)  also made a half dozen recommendations for testing and remediation.  ADEQ informed the county of potential federal funds earmarked for the remediation of brownfields but it does not appear that the county ever  sought these funds or undertook efforts at remediation.

Williams is seeking an injunction to halt site preparation to allow for soil sampling and other tests needed to determine the extent of the contamination. He is asking for an evidentiary hearing to show that the county failed to follow appropriate environmental protocols. He argues that proceeding with construction constitutes a risk to public safety and potential liability for taxpayers if  future inmates or correctional staff encounter  health issues.

Mr. Stringer:  Bill,  efforts to stop the jail seem to be coalescing around environmental issues. What brought these issues to your attention?

Mr. Williams:  In July of this year, the county paid for a report from Speedie and Associates, an environmental engineering firm from Phoenix. Someone “leaked” me a copy and it was a “page turner.” I couldn’t put it down. In 360 pages, it describes pollution and makes recommendations to remediate pollution at the site of the new jail. It even recommends not disturbing the earth, but we have all seen the bulldozers in action. 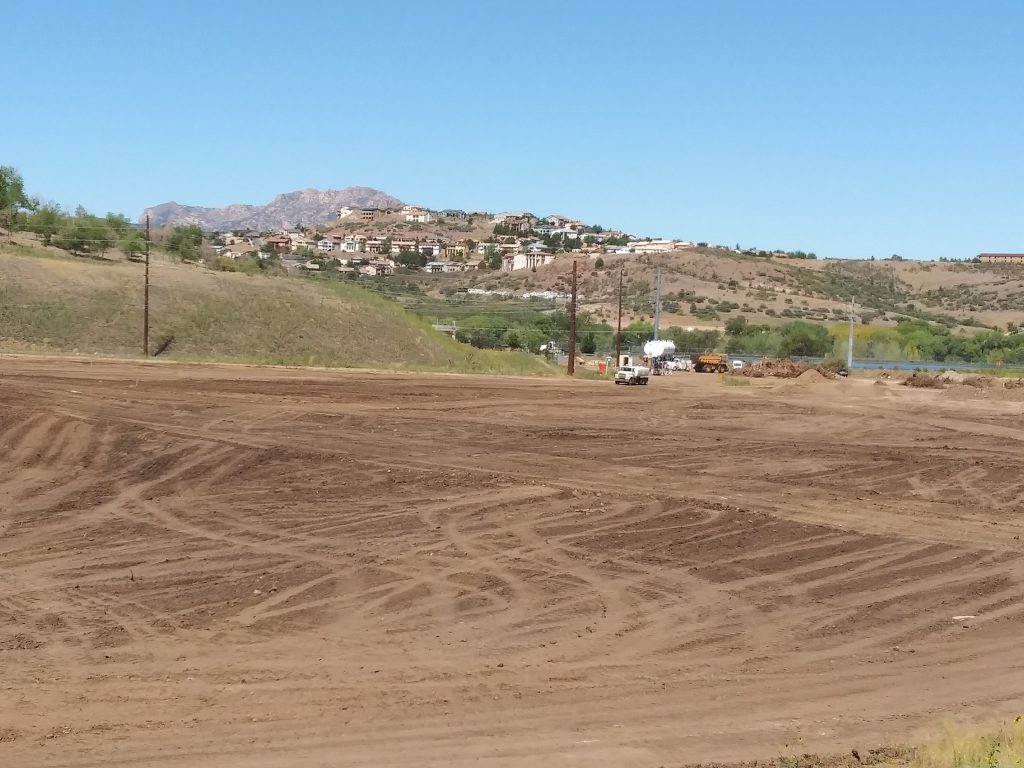 Mr. Stringer:  Can you tell us in layman’s terms what the problem is?    What exactly does your lawsuit aim to do?

Mr. Williams:  I seek a preliminary injunction to halt bulldozing and construction until the County can assure us the proper remediation is done. Speedie did an incredible job of going back in time to 1954 to show us who owned the land while identifying  the presence (or former presence) of underground storage tanks, at least one leaked; septic tanks, water wells,  petroleum, diesel, volatile organic compounds, hydrocarbons, cadmium, benzene, toluene, ethyl benzene, chromium and  di-n-butyl phthalate; and of course one big question is: why did the county end up owning the landfill on site?

Mr. Stringer:  Can you tell us a little about your background?

Mr. Williams:  I have a few college degrees including a masters in journalism and a two year paralegal degree. I worked in TV news for 14 years, switched over to print journalism and later worked for the federal government and state governments as a public information officer – in the areas of health and environment.

Mr. Stringer:  Have you ever done anything like this before,  I mean,  as an investigative reporter,  have you ever had to sue the county?

Mr. Williams:  I was assigned to cover a U.S. EPA public meeting near Niagara, New York, dealing with 900 families who were evacuated from Love Canal because of poisoning by pollution; later I was assigned the story about dioxin in the Niagara River that was causing fish to become deformed. And I did research on a toxic waste site in New Mexico that was using soil vapor extraction methods to investigate pollution. I did sue Yavapai County years ago to obtain documents in the Steven DeMocker murder trial – and I won. I rallied with former County Assessor Pam Pearsall when the Supervisors took away her one dozen employees and $1 million in division funds. We won of course. She got her people and her money back.

Mr. Stringer:  Do you have an opinion about the integrity and transparency of our county government?

Mr. Williams:  When the Supervisors say they are “going into executive session,” that gives them a license to steal – our tax money. If I had not filed this lawsuit and local activists had not written letters, I believe they would have built the jail without telling us that the report from Speedie had ever been written. Our efforts forced them to place that environmental assessment on their new website which is yavapaijustice.com.

Mr. Stringer:  The issue of building a new jail in Prescott has been kicking around for years.  The county government tried to raise taxes twice to fund a new jail.  In 2008 and again in 2014  voters said No.  You are now suing to stop the jail on environmental grounds.  Is your goal simply to stop the jail by any means possible or are you willing to accept the jail if the environmental issues can be solved or if the jail is built somewhere else?

Mr. Williams:  Research by local residents shows the Supervisors wanted the jail since the 1990s. Former Supervisor Carol Springer signed the deed from the former owners and gave them $2.8 million in 2011 in exchange for the land. (see below) My lawsuit is to halt the bulldozing until they address the pollution. I think other taxpayers should sue to stop them on financial, political and corruption reasons. Residents of Prescott Lakes and the Humane Society could file a nuisance lawsuit. Leaders in this community have said to me “who in the world builds a jail in the middle of a resort town?” 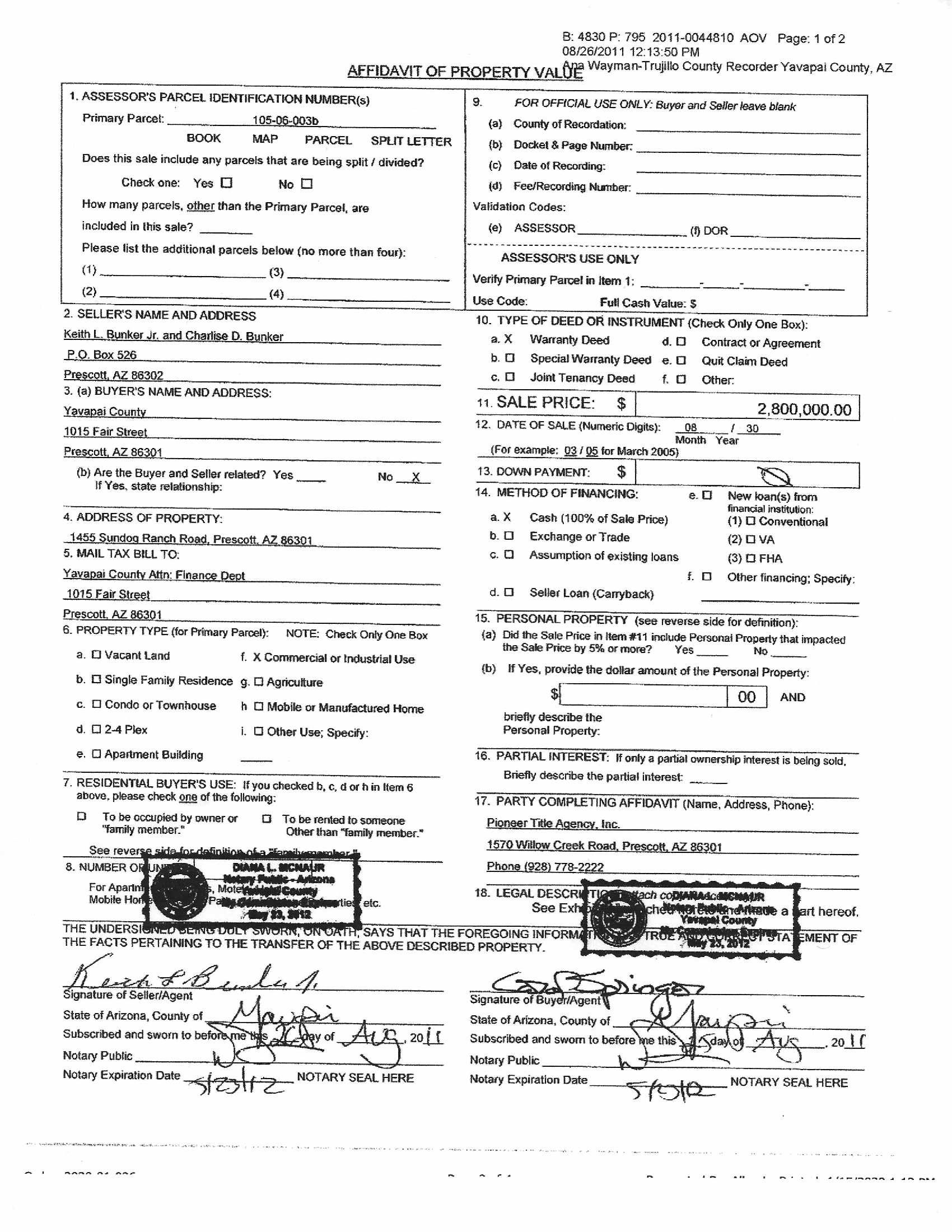 Mr. Stringer:  In your view,  does the county need a new jail in Prescott?

Mr. Williams:  We have two jails and two courthouses, so the Supervisors, Sheriff and County Attorney can stop the whining about having to bus inmates/suspects from Camp Verde Jail to Prescott – which has been their number one reason to build the new jail. The judges should be driving to our beautiful new courthouse in Camp Verde, near the larger existing jail, or the new supervisors should halt the new jail construction and remodel the jail on Gurley Street which can house 140 inmates – at a fraction of the new jail cost.

Mr. Stringer:  Are you working with anyone else, any other groups?

Mr. Williams:  I’m not “working with anyone” but as an investigative reporter/paralegal I seek many opinions before I act, so I have filed, as Exhibit 14, State Representative Noel Campbell’s brilliant letter about jail site pollution that he sent to the state environment department;  plus an affidavit from a local chemical engineer, and a letter to the Supervisors from the state environment department. I agree philosophically with the two “no jail” activist groups but theirs was not a pollution claim.

Mr. Stringer:  In your recent talk with the Citizens Tax Committee (CTC),  you said that attorneys and engineers who have looked at the case have told you it has merit. Can you be more specific?   Procedurally,  what has to happen to move the case forward?

Mr. Williams:  Numerous attorneys and environmental engineers have said there is “merit” to my case. The lawyers representing the County Supervisors (the defendants) are Sheila Polk, Benjamin Kreutzberg and Matthew Black who have filed numerous briefs to dismiss the case on technical grounds. The judge on the case used to work for Sheila Polk. If I can get past their recent, ludicrous motion – that I can’t sue the Board, I have to sue the County Jail District – maybe I can get to the evidentiary hearing that will win the case.

Mr. Stringer:   Are you getting the help you need?  What can average citizens do to help?  Your talk at CTC was well received.  Are you available to talk to other groups?  How can you be reached?

Mr. Williams:  I would suggest local citizens find that environmental assessment, from Speedie, which has been buried on that county website, and write a letter to the Supervisors. I have a GoFundMe page: Question the Jail. As I said, the lawsuit is sound and I am speaking to experts but would welcome other opinions sent to my backup email b.w007@yahoo.com and yes I would speak to other civic groups. Lord knows we only have one news organization digging into this.. 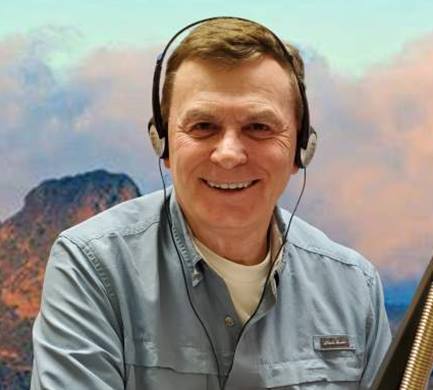 David Stringer is the Publisher of Prescott eNews, and a local Prescott attorney.
All Posts »

1 thought on “Plaintiff in Jail Lawsuit talks to eNews”