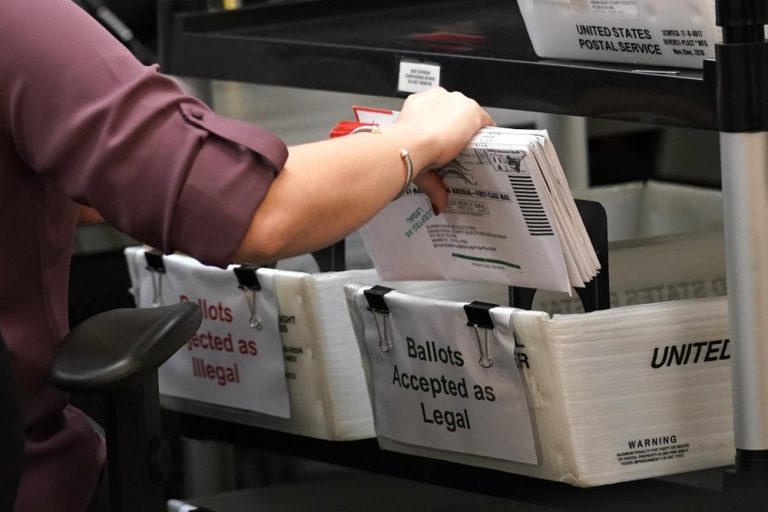 When the Trump campaign announced Tuesday that the Arizona Legislature would hold a public meeting next week to review this year’s elections, there was just one problem.

“There is no legitimacy to that claim and there are no hearings being held on that issue on Monday or any other day,” said Sen. Rebecca Rios, D-South Phoenix, the incoming Senate minority leader.

Rios said Wednesday that she has heard “absolutely nothing” about any hearing. An aide to Senate President Karen Fann said she had not authorized any such hearings, and a spokesperson for Speaker of the House Rusty Bowers said the same.

The announcement about the alleged hearing came in a press release from the Trump campaign, which said Arizona was one of several battleground states whose legislatures were planning election reviews.

“We are pleased that the State Legislatures in Pennsylvania, Arizona and Michigan will be convening hearings to examine the November 3rd presidential election,” said the statement from Jenna Ellis, the campaign’s senior legal adviser.

Arizona’s was supposedly set for Monday, but the Legislature’s calendar for that day is blank. It is the same day state officials are expected to certify the election results that will give Arizona’s 11 Electoral College votes to Democratic President-Elect Joe Biden.

Gov. Doug Ducey, who is scheduled to take part in Monday’s election certification, did not respond to a request for comment, but he acknowledged Tuesday that Biden had won Arizona.

The campaign press release came the same day that Arizona Republican Party Chairwoman Kelli Ward said she was filing a petition in superior court in advance of a lawsuit that she said would challenge Monday’s statewide canvass of election results. In particular, she said, election observers were kept too far away to verify certain ballots.

They are the latest in a string of attempts by the GOP to challenge election results in battleground states that Trump lost to Biden, to whom he has refused to concede.

Just days after the election, the campaign and state and national Republican parties filed a lawsuit claiming that ballot tabulation machines erroneously rejected some ballots. That was followed days later by an Arizona Republican Party suit that said the way Maricopa County officials audited election results was in technical violation of state law.

A third lawsuit by individual voters argued they could not be certain their ballots had been talled. All three suits were quickly dismissed with prejudice by judges.

The Pennsylvania hearing did happen Wednesday, according to news reports that said Republican lawmakers who heard from voters who had claimed seeing election fraud. Ellis said the hearings would show “witnesses, videos, pictures and other evidence of illegalities” during the election.

Despite the president’s insistence, however, it has not been able to provide evidence of voting irregularities in what the Department of Homeland Security’s own cybersecurity agency deemed “the most secure in American history.”

Rios believes the Trump campaign is continuing its efforts to assert claims of election fraud because it “wasn’t happy about acknowledging Biden as our next president.”

“So there really is no basis, other than to spread a conspiracy theory and to raise doubt and fear in our electorate for literally no legitimate reason,” she said of the latest claims.