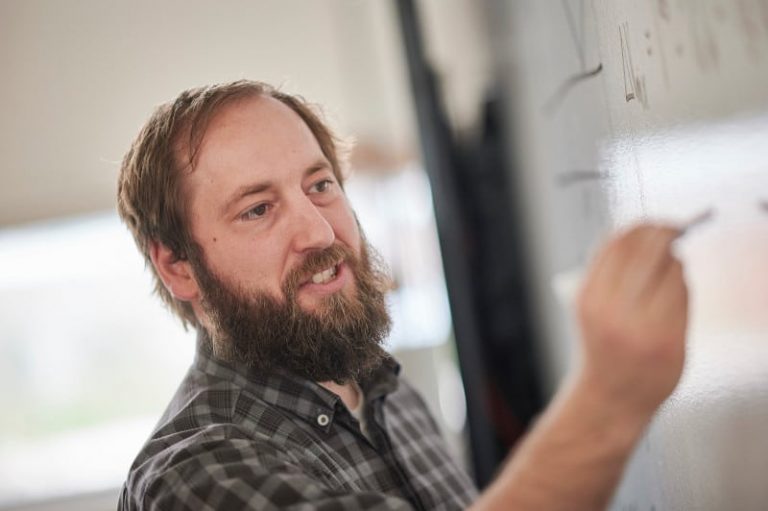 Scientists say Saturn’s largest moon, Titan, is the only body in the solar system besides Earth with liquid on its surface. However, chemical elements behave very differently there in the extremely cold and dense atmosphere, with a temperature of minus 300 degrees Fahrenheit. For example, water forms Titan’s bedrock while methane acts much like water does on Earth—it flows, evaporates and rains down on Titan to form rivers, lakes and seas.

In preparation for its 2026 Dragonfly mission to Titan, which is more than 1.5 billion miles from Earth, NASA wants to better understand how molecules mix in this water-like system of methane, ethane and nitrogen and other elements that creates gases, liquids and solids, along with the past and current stability of Titan’s surface.

Through a $666,000 grant, NASA is supporting a collaborative research project between Northern Arizona University and Lowell Observatory, “Investigating the Stability of Trace Species in Titan’s Lakes and Seas.” NAU will receive $349,000 over three years to conduct experiments that examine the behavior of various chemical interactions. Co-principal investigator on the project, Gerrick Lindberg, is an associate professor in NAU’s Department of Applied Physics and Materials Science. He is leading the effort to understand Titan’s lakes from the molecular scale, which will directly inform that of principal investigator Jennifer Hanley, a planetary scientist at Lowell. Hanley is conducting an examination of the environmental conditions on Titan in the Astrophysical Ice Laboratory on campus, a shared facility between NAU and the observatory.

“Our cryogenic Astrophysical Ice Laboratory setup enables us to study materials down to minus 300 degrees through imaging,” Lindberg said. “Samples will include mixtures of methane, ethane and nitrogen, along with trace species such as propane, ethylene and acetylene.”

“We want to understand how similar Titan is to early Earth and what is happening there today that is changing the surface,” Hanley said.

The team will examine how molecules react in a world that has an atmosphere 1.5 times denser than Earth’s and intense pressure at lake depths of 600 feet. They will measure phase changes such as freezing, along with solubilities, using Raman spectroscopy, which determines vibrational modes of molecules.

“When it freezes, water becomes less dense, so it floats,” Lindberg said. “But this is not true of methane and ethane. We want to understand the density of these materials, especially when combined with trace amounts of other elements.”

Prior investigations have found that the freezing point of methane is lowered when mixed with nitrogen and/or ethane. Preliminary work shows that propane can further disrupt the stability of the methane-ethane-nitrogen system.

Experiments will be performed in a thin cylinder that has a window on two sides for observational purposes. The scientists will be able to capture pictures and videos.

“With the simulations, we can make a movie of the molecules bouncing around,” Lindberg said. “We can identify the molecules in the liquid and see how they coordinate with each other, how fast they are moving, whether they evaporate or not and see how different materials might separate under various conditions. We are interested to learn which molecules will drive the changes that we see—how they behave at the interface between liquid and gas and how they freeze, evaporate and interact with light as it hits the surface.”

Understanding the stability of combinations of these molecules has implications for not only the lakes and seas on the surface of Titan, but also for the evaporation/condensation/cloud cycle in the atmosphere, as well as the stability of these chemical elements on other outer solar system bodies. The results are expected to guide current theoretical models and the interpretation of future observational data.

“One of the major thrusts of the project is to try to understand what leads to the surface of bodies looking the way they do, especially when molecules are not doing the same things on Earth as they are elsewhere,” Hanley said.

The research is expected to be directly applicable to NASA’s Solar System Workings objectives of characterizing and understanding the chemical, mineralogical and physical features of planetary surfaces and fluid inventories that interact with the surface. The knowledge gained through this research will contribute to the Dragonfly mission, which is expected to land on Titan in 2034 and whose goal is to advance the search for the building blocks of life.