Opinion: Media Could Be at a Loss Without Drama King Trump 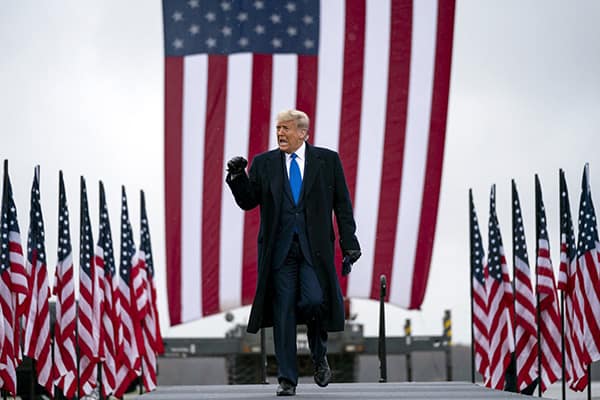 Trump is a ratings booster, too. Just check the metrics for CBS.

Contrast that with Oct. 25. That “60 Minutes” episode featured separate interviews of Donald Trump and Joe Biden leading up to the 2020 presidential election. The viewership was 16.8 million.

Remember, in August of 2015, the first Republican primary debate became a marquee event, as the show collected 24.5 million viewers for the Fox News Channel, then the highest-rated primary debate in history.

Just wait and see, when Trump becomes Mr. Ex-President, regular networks and cable news will be clamoring to procure the first prime-time interview with him.

Yes, a Trump term is good for the media world, love him or loathe him.

It’s similar to the O.J. Simpson fascination of 1994-1995. The list is long featuring those regular figures who became public figures while covering or commentating on the murder case, from Greta Van Susteren to Jeffrey Toobin to Nancy Grace to Tavis Smiley.

Similarly, who knew of Mary Trump before she wrote a book about the alleged transgressions of her Uncle Donald.

In fact, Musa al-Gharbi, a Paul F. Lazarsfeld Fellow in the sociology department at Columbia University, wrote about the Trump-Media fascination this way in the Columbia Journalism Review:

“Trump hates the media, the media hate Trump — but they are also obsessed with each other. And Americans can’t seem to look away; like print media, cable news outlets have enjoyed record ratings and huge increases in ad revenue by fetishizing the president.”

—   Cable news media consistently give Trump about twice as much airtime per day on average as it gave Barack Obama from 2010 to 2012.

—   The New York Times gained a record spike in subscriptions during the 2016 election cycle, due largely (in the Times’ own accounting) to the mutual antagonism between Trump and the national paper of record.

— The publication now boasts a record-high number of paid subscribers, and isn’t alone as many outlets have experienced sharp increases in readership and subscribers by capitalizing on (and reinforcing) this obsession with Trump.

Added al-Gharbi: “Trump has ceased to be just a topic of news; he seems to be the prism through which we interpret and discuss everything.”

From lifestyle to weather to entertainment to science to sports, etc. We saw a recent example of that in the NBA world.

We all know Trump can be counted on to provide hot news for a variety of news media on a second-by-second basis.

However, once he voluntarily leaves the White House — or is forcefully jettisoned — how do the national media fill that void? Or is it even an issue?

“Joe Biden will be making enough news trying to put through his agenda, challenged by what might be a Republican Senate,” media columnist Richard Prince of “Journal-isms,” a digital publication focusing on diversity issues in the news media, explained to InsideSources.

“Dealing with the pandemic, and trying to undo what Trump did during his four years, should also keep the news media busy. Moreover, any down time can be filled by covering the Cabinet departments and agencies, considered under covered by the national media.”

How much will a post-presidency Trump resonate? Here, we say it depends on the ratings.

If ratings for CNN, Fox News Channel and MSNBC increase with stories and segments on Trump, then, of course, we will see him on our screens.

Especially if Trump finds himself entangled in the legal system here in Washington or New York, regardless of whether he pardons himself. All of which could backfire for Biden because that daily drumbeat of Trump court cases could upstage Biden’s nascent administration.

Another casualty come Jan. 20 will be the media’s fact-checking genre.

There’s no way Biden and his new crew will be fact-checked even close to the magnetic levels glued to Trump. Biden will be trusted more — rightly or wrongly — and likely would proceed with impunity on MSNBC and CNN, both Biden-friendly networks.

Therefore, it seems the network with the most to gain in the upcoming New World will be Fox News Channel. While MSNBC and CNN thrived big time with the Donald Trump Lie-o-Meter,  Fox’s Gaffe-o-Meter could operate in overdrive regarding Biden.

The more Trump-friendly Fox network potentially could display a smorgasbord of Biden gaffe montages, a predilection the channel already has exhibited.

As the networks try hard to gain ratings in a post-Trump world.