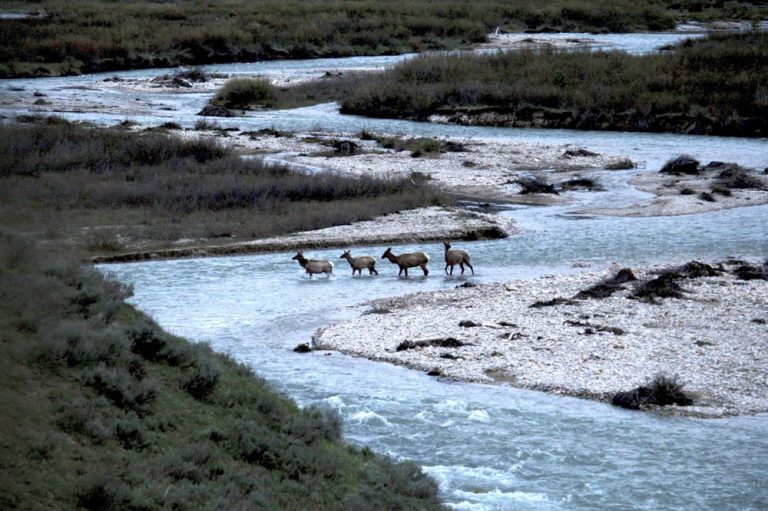 The life-or-death journey made by mule deer during the second-longest big game migration in North America came down to their ability to squeeze through a fence — a discovery made by scientists using wildlife GPS tracking techniques to map animal migrations in the West in unprecedented detail.

The resulting atlas of migration corridors in Arizona, Idaho, Montana, Nevada, Utah and Wyoming published by the U.S. Geological Survey can help elk, mule deer, antelope and other animals by focusing efforts to reduce man-made obstacles along their journeys, biologists and wildlife advocates say.

“The new technology, the GPS collars and the computer programs that are able to analyze this data, is giving us such a different picture of what migrating wildlife do,” said Miles Moretti, president of the Salt Lake City-based Mule Deer Foundation, which funded some of the research. “This has given us some information like we’ve never had before, which will also now in turn drive the policy.”

A former wildlife biologist, Moretti used to venture into the field every couple weeks to locate animals fitted with radio collars. These days scientists can follow animals from their computers in almost real time, gathering vastly more data with a lot less trouble.

They watch as big game animals in the West chase emerging spring greenery to ever-higher elevations, then return to lowlands to avoid the worst of winter’s cold and snow. Some mavericks meander off on their own squiggly computer lines. Most follow the crowd — or literally the herd — on migration corridors, a kind of highway for animals.

“The big highways, a lot of the herd is using. Once you identify those, that becomes an important target for conservation,” said Matthew Kauffman, USGS lead scientist for the mapping project.

Mule deer, for example, plummeted in number when home development surged in the Wyoming ski enclave of Jackson Hole decades ago, said Mike Eastman, a writer and wildlife photographer who grew up in the area and used to guide hunters there.

“Mule deer are real susceptible to a lot of people in an area, and it just kind of pinches them off,” Eastman said. “They’re kind of like steelhead or salmon and can’t get up there because a dam is in the way.”

Fences that impede mule deer — big-eared cousins of whitetail deer — or pronghorn antelope can be deadly. Roads, such as Interstate 80 from Wyoming to California, also hold up and kill migrating big game animals.

While some animals, such as migratory birds, can genetically inherit knowledge about when and where to migrate, others learn from their elders. Reintroduced populations of Western big game animals need decades to rediscover migration routes, research suggests.

Even so, remarkable migrations persist in the West.

Over the past decade, Kauffman and others have used GPS to map migrations including the second-longest known in North America, a 300-mile (500-kilometer) round-trip journey mule deer make each year between a desert and high mountain ranges in western Wyoming.

The science-guided conservation projects included the $2.1 million purchase of half a square mile (1.5 square kilometers) of land earmarked for home development near Pinedale, Wyoming. The 2015 purchase with public and private funds helped ensure that 5,000 mule deer can continue to pass through a migration “bottleneck” where the town and a lake narrow the path of the animals.

Before the purchase, many of the mule deer had to squeeze through small openings in a fence to make their journey. The purchase led to the removal of almost 3 miles (5 kilometers) of fence as well as saving the area from development.

Wyoming also has been leaning on migration research to build what could be dozens of animal underpasses to make roads safer and reduce 6,000 collisions with big game animals each year.

— In Arizona, highways including Interstate 40 affect the movement of antelope west of Flagstaff. Meanwhile, mule deer migrating between the Grand Canyon and summer range in the San Francisco Peaks north of Flagstaff must contend with highways busy with visitors to Grand Canyon National Park.

— Drought and attacks by wolves and grizzly bears have diminished a more than 30-mile (50-kilometer) elk migration between Yellowstone National Park and foothills west of Cody, Wyoming. The atlas also contains maps of bison and moose movements in and near Yellowstone.

— In northeastern Nevada, fences and a gold mine challenge mule deer that migrate between the Pequop Mountains in winter and Jarbidge Mountains in summer despite construction of wildlife overpasses and underpasses on I-80 and U.S. 93.

The atlas itself doesn’t advocate policy regarding the handling of animal migrations and contains “just the science,” Kauffman said. Still, policy-makers have taken notice.

A variety of public and private funding is available to help wildlife agencies with projects such as replacing fences so they’re low enough for mule deer to leap or have barb-free bottom wires high enough for antelope to scramble under, said Doug Brimeyer, Wyoming Game and Fish Department wildlife coordinator.

“We can put a proposal together and use the atlas to kind of show those areas are important,” Brimeyer said.

Wyoming plans to use the data to continue its carrot-not-stick approach to protecting migrations. Gov. Mark Gordon in February designated three mule deer migration corridors with plans for others where state officials would encourage but not force help from landowners.

“These maps can point to the threats and also the solutions. And we now have a whole toolbox full of tools that we can use to maintain these migration corridors,” Kauffman said.

A second volume of the atlas, detailing dozens more routes in California, Colorado, Montana and Washington state, is in the works for 2021.