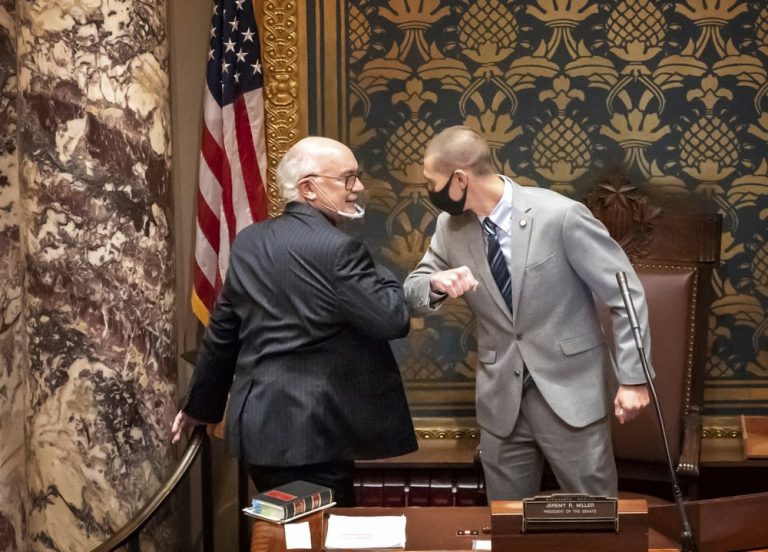 Many Republican lawmakers in states where coronavirus cases and hospitalizations have surged are not only rejecting statewide mask mandates. They’re also resisting rules requiring them in their own capitols.

Efforts to require lawmakers and staff to wear masks have received a cool reception even in statehouses that have seen outbreaks of the virus or where Republican governors have issued statewide mandates. It’s echoing a partisan divide nationwide over a simple step that health experts say is proven to help keep others safe.

“We’re supposed to be modeling for our constituents and for our residents in our state,” said Arkansas state Sen. Stephanie Flowers, a Democrat in the majority-Republican Legislature who proposed a rule requiring senators to wear a mask or risk losing their per diem payments. “You’ve got the governor asking everyone to wear a mask and socially distance. It’s not like I’m asking for something nobody has heard of.”

Many legislatures are still planning and drafting rules for their 2021 legislative sessions, while four chambers approved rules requiring masks for sessions this year, according to the National Conference of State Legislatures.

Nearly 200 legislators nationwide have tested positive for the virus and four have died from COVID-19 since the pandemic began, according to figures compiled by The Associated Press. After at least four dozen Mississippi lawmakers tested positive in the largest outbreak in a legislature, where masks were encouraged but not required for lawmakers.

Missouri’s Legislature postponed a special session focused on virus relief after a COVID-19 outbreak among lawmakers, and a Tennessee lawmaker said she won’t be able to spend Thanksgiving with her mother after attending a hearing where legislators weren’t wearing masks.

Health experts warn the public is taking their cue from elected officials at a time those officials are trying to restrict or discourage indoor gatherings that are fueling a rapid rise in cases.

“We know it works, but if political leaders don’t stand behind their public health officials and say we need to do this, a significant portion of the public may not follow,” said Dr. Jeffrey Levi, professor of health policy at George Washington University.

Legislatures have taken steps to try to limit the virus, with some allowing remote voting and others meeting in larger venues to allow more spacing. Arkansas’ House, for example, met in a basketball arena for two sessions last spring but will return to the Capitol next year.

Twelve Arkansas lawmakers have tested positive for the virus over the past month, the second largest known outbreak in a state legislature.

The latest outbreak began after lawmakers convened at the Capitol for budget hearings last month. The budget panel had adopted a mask rule that didn’t require lawmakers to wear them when speaking into a microphone, drinking or if they were at least six feet away from other people.

Flowers has diabetes, which puts her at a higher risk of complications from the virus. She pulled down her proposal for a stricter rule in the Senate to make changes based on concerns raised about the measure and plans to bring a reworked version back when lawmakers convene in January. House Speaker Matthew Shepherd said he expected that chamber to take up a version similar to the Joint Budget Committee’s rule.

Republican Sen. Trent Garner called Flowers’ proposal and its penalties “draconian” and said the Legislature should be held to the same standard as the statewide mask mandate GOP Gov. Asa Hutchinson signed earlier this year.

“We don’t need to create a ‘tell on each other’ rule when it comes to public safety,” Garner said.

Tennessee Democratic state Rep. Gloria Johnson tweeted Tuesday she would no longer have Thanksgiving dinner with her mother after attending a legislative meeting with Republican members who weren’t wearing masks.

“We aren’t having a big family Thanksgiving dinner (with) mom due to COVID, but I was going to eat with her at a distance,” Johnson wrote, adding that being around her legislative colleague for the past two days will now mean she’ll “leave her food on the steps.”

House and Senate leaders in Oklahoma announced plans to impose a mask mandate for employees who work inside the Capitol after two lawmakers tested positive last week. But legislative leaders acknowledged that individual legislators couldn’t be forced to wear masks.

An outbreak among Missouri state senators that postponed a special session focused on federal coronavirus aid hasn’t spurred a requirement for lawmakers there to wear masks either. Republican senators were photographed not wearing masks during a caucus retreat with GOP Gov. Mike Parsons.

“Senators have been encouraged to wear masks and many have done so as they move around through public spaces,” Senate President Pro Tem Dave Schatz said. “It is, however, ultimately up to each individual to make that decision.”

The fight among lawmakers in some states goes beyond mask rules to whether information is being withheld about outbreaks in their capitols. In Minnesota last week, Democrats in the state Senate demanded that the chamber’s majority leader resign from his leadership post after he and other Senate Republicans failed to notify their Democratic colleagues and others of a potential COVID-19 outbreak among the GOP ranks.

Pennsylvania’s House has had a mask rule for its members in place since June, but a couple dozen of the chamber’s most conservative Republicans have routinely ignored the mandate, and their party’s leaders have not enforced it. A Democratic lawmaker on Friday tweeted she had filed a complaint with the state Health Department for unsafe working conditions over the issue.

House Republicans in Ohio have also rejected efforts to require that lawmakers wear masks at the Statehouse, and a statewide mask mandate issued by GOP Gov. Mike DeWine hasn’t been enforced on them either.

The debate in state capitols is mirroring that among lawmakers in Washington. Masks are required in the U.S. House, but not in the U.S. Senate. Senators of both parties regularly take off their masks to speak on the Senate floor, a practice that’s received some pushback from Democrats.

Sen. Sherrod Brown, an Ohio Democrat, interrupted a floor speech Monday afternoon to ask Sen. Dan Sullivan, an Alaska Republican, to put on his mask as he presided over the Senate, noting that he could be exposing staff nearby.

“I don’t wear a mask when I am speaking, like most senators,” Sullivan responded, snapping that he would put the mask on but that “I don’t need your instruction.”