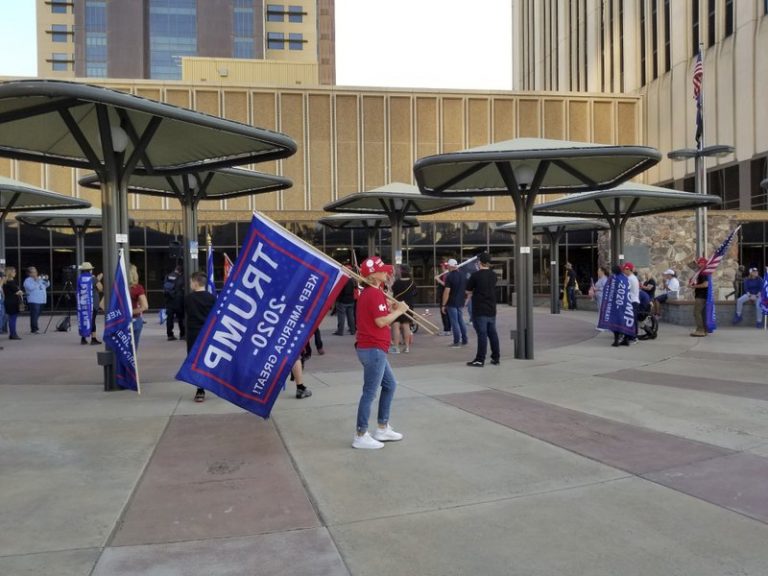 The elected leaders of Arizona’s most populous county certified election results Friday that showed Democrat Joe Biden won the presidential race and set the stage for state leaders to certify results once one holdout county follows suit next week.

The five-member Maricopa County Board of Supervisors acted after lawsuits backed by the Republican Party and others supporting President Donald Trump failed to halt the normally routine action of verifying election results. One Democrat and four Republicans are on the Phoenix-based board that voted unanimously to accept the election results.

Protesters marched outside the board chambers urging members not to approve the canvass, but Republican Chairman Clint Hickman said there’s no question about the accuracy of the count and no legal reason not to certify it.

“In a free democracy elections result in some people’s candidates losing,” Hickman said, “I was disappointed in the outcome of a couple races and I was extremely happy with the outcome in others. But I’m not going to violate the law or deviate from my own moral compass as some have pushed me to do.”

The Arizona Republican Party had asked a court to order an audit of a larger sample of ballots, saying there were questions about the counts, but a judge in Phoenix threw out that effort Thursday.

The action by the Maricopa County board comes as the state GOP has been pressuring county officials statewide to delay certifying their election results, leading officials in Republican-heavy Mohave County to postpone their certification until Monday. That’s the deadline for them to act, unless there are outstanding votes that have not been counted. That is not the case; all 15 Arizona counties had completed their tallies by the end of last week.

Board members heard extensive reports from county elections officials who said the vote count was correct and noted that all tests and hand-count reviews showed the electronic ballot count was 100% accurate. Those tests are done with help from Democrats and Republicans.

Around 70 Trump supporters gathered outside the site where the supervisors were meeting. Various speakers took turns lambasting the board, saying any certification would be an act of “treason.” They also rehashed previous allegations such as votes had been cast in the names of hundreds of dead people. Several people said an independent, forensic audit of ballots and voting machines would make them feel comfortable accepting whatever election outcome.

“The point is it’s not that there is voter fraud. The point is, is there the possibility of voter fraud,” said Stephanie O’Brien, 56. “If there is, it takes away the confidence of the people. My biggest issue is I don’t feel confident about it.”

Several lawsuits had been filed since Election Day, and the remaining challenge was dismissed as the board was meeting, although its outcome would not have changed the outcome that saw a Democratic presidential candidate win the state for the first time since 1996. It alleged that some voters’ ballots may not have been tabulated at county-run election sites, but that could only affect a handful of potential votes.

Maricopa County Superior Court Judge Margaret Mahoney announced her plans immediately after lawyers made closing arguments at a hearing, though she didn’t detail her reasons for wanting to throw out the case.

The lawsuit asked a court to let one person who alleged a tabulator rejected her ballot to recast her vote. Lawyers defending Maricopa County said there was no evidence the votes of the two people who filed the lawsuit weren’t counted.

During the hearing, lawyers who filed the case tried to admit into evidence a photograph of a ballot taken inside a polling location, but later backed off that effort when it was explained that it’s a crime to take photos within 75 feet of a polling place. Those lawyers also faced criticism when they unsuccessfully tried to admit into evidence an expert’s report about a tabulator made by the same vendor used by Maricopa County, but the expert hadn’t examined the model used by Maricopa County.

Biden won the county by more than 45,000 votes, and bested Trump statewide by a margin of more than 10,000 votes. The win came as Democrats made an all-out push to turn Arizona blue after decades of leaning Republican.

Democrats pinned their hopes on Arizona’s changing demographics and swing voters who split their tickets two years ago to elect a Republican governor and send a Democrat to the U.S. Senate. Their fortunes have risen thanks to the state’s growing Latino population, an influx of new voters and unease with Trump among suburban women.

Trump and his allies battled to hold on to Arizona, which the president won in 2016 by 3.5 percentage points.

The state plans to do its statewide election canvass on Nov. 30.