Trump influence seen in deadlock of Michigan election board 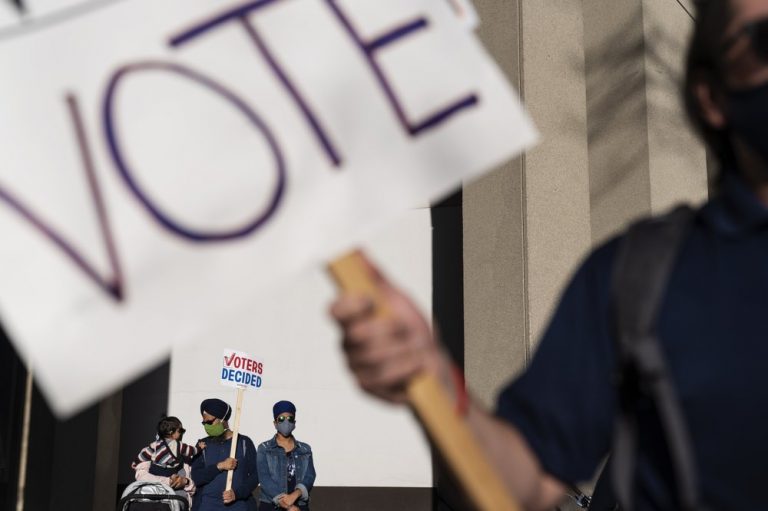 President Donald Trump offered up his first tweet praising two Michigan Republicans for blocking certification of election results only after the pair did an abrupt about-face in favor of Democrat Joe Biden.

But everyone watching the meeting of a Detroit-area election board suspected that the president’s efforts to cast doubt on the election played an outsized role in the vote, which briefly threatened to delay the official declaration of Biden’s victory in the state.

Republicans Monica Palmer and William Hartmann initially voted against certification Tuesday, leaving the Wayne County Board of Canvassers deadlocked at 2-2 along party lines. Palmer complained that certain Detroit precincts were out of balance, meaning that absentee ballot books did not match the number of ballots cast.

The GOP move drew an immediate rebuke from the public and injected partisan politics into the business of an unsung panel that is supposed to confirm the will of the voters. From kitchens, bedrooms and porches, people observing the meeting by video expressed unfiltered outrage during a public comment period and put the Republicans on notice that they would awaken the masses. The criticism went on for hours. Zoom access to the meeting was forced to expand beyond 100 people.

“The unity, all the fighting that we are doing to keep our country unified, and you are part of the problem,” voter Bernita Bradley of Detroit said during her turn.

The Detroit NAACP president, the Rev. Wendell Anthony, called Palmer and Hartmann a “disgrace.” He doubled down on his denunciation Wednesday, citing a “deadly political virus attacking our election process.”

Biden crushed Trump in Wayne County, a Democratic stronghold, by a more than 2-1 margin on his way to winning Michigan by 146,000 votes, according to unofficial results. His victory reversed Trump’s 2016 gains in the industrial Midwest and put Biden on the path to achieving the 270 Electoral College votes needed to win the White House.

The county canvassers later voted again and certified the results, 4-0.

There has been no evidence of widespread voting fraud in Michigan or any other state. Federal and state officials from both parties have declared the 2020 election safe and secure. But Trump and his allies have spent two weeks raising false claims of fraud and refusing to concede to Biden. That has put pressure on GOP election officials.

Norman Shinkle, one of the two Republican members of the Michigan Board of State Canvassers, told The Associated Press that he had not been contacted by anyone with the Trump campaign. But he said he was bombarded with phone calls and emails from random Trump supporters urging him not to approve the election results.

“They know I’m a Republican and they say, ‘Don’t certify,’” he said.

Michigan Republican Party Chair Laura Cox reacted swiftly after the initial Wayne County deadlock. An email landed immediately at the AP, with Cox saying she was proud that the party’s work had caused GOP canvassers to refuse to bless the election results.

Earlier in the day, Democrats began to doubt whether Republicans would certify the vote.

“We all noticed they were on their phones (during the meeting),” Michigan Democratic Party Chair Lavora Barnes said. “There were a lot of text messages. Something is clearly at work. This isn’t their first canvass with precincts out of balance. They have certified elections that are more out of balance.”

U.S. Rep. Debbie Dingell, whose district includes portions of Wayne County, said she had anticipated that the two GOP board members “would get lots of calls from senior people” in their party pressuring them to vote against certification.

Dingell said she and fellow Democratic Rep. Rashida Tlaib of Detroit phoned local leaders and activists ahead of the meeting “to make sure there would be balanced attendance.”

Detroit, which is about 80% Black, has been a frequent target of Trump, along with Philadelphia and Atlanta — cities with large African American populations that voted for Biden.

The deadlocked vote in Wayne County was a blatant attempt at voter suppression fueled by “50% racism and 50% Republican politics because of Trump,” said Nicole Small, one of hundreds of people who watched Tuesday’s meeting.

Palmer and Hartmann’s changes of heart came after “three hours of being berated by the public,” said Wayne County Commission Chair Alisha Bell, a Democrat who is Black.

“They came to their senses to do the right thing,” Bell said. “This was just wrong. They had to single it out against Detroit.”

The AP left messages Wednesday seeking comment from Palmer and Hartmann. Hartmann said after the meeting that he changed his vote because the canvassers agreed to seek an audit of Detroit’s election performance.

County canvassing board Vice Chair Jonathan Kinloch, a Democrat, said the public comments “tilled the ground” and allowed him to take Palmer and Hartmann aside to urge them to reconsider their vote.

“I don’t know if Trump spoke to them. But I absolutely felt that they intended to vote the way that they voted,” Kinloch said of the initial 2-2 tie. “I know they were under a lot of pressure.”

Wayne County’s election results and those of Michigan’s other 82 counties now go to Secretary of State Jocelyn Benson, a Democrat, who then presents them to the state canvassing board, which is scheduled to meet Nov. 23. That board also has four members: two Democrats and two Republicans.

“You just don’t know” what will happen, Barnes said.

Shinkle, a former state senator who been on the state board for 12 years, said he was troubled by the way the election was handled in Detroit. In particular, he said, the city failed to have a Republican working on the election staff in each of the 516 precincts, as required by law.

“I think that’s a serious problem,” Shinkle said. “From my perspective, the law wasn’t followed. I can say we have serious problems. The question is: Do we throw out the election because of it?”

The state board is tasked with reviewing the county results and compiling the certified totals into statewide totals, according to Chris Thomas, a former Michigan elections director who served as an adviser to Detroit City Clerk Janice Winfrey for the general election.

“This is not just a vote to certify the presidential election. This certifies the entire state, said Thomas, who added that by not certifying the county results, the state board would “would basically nullify the entire election” in Michigan.