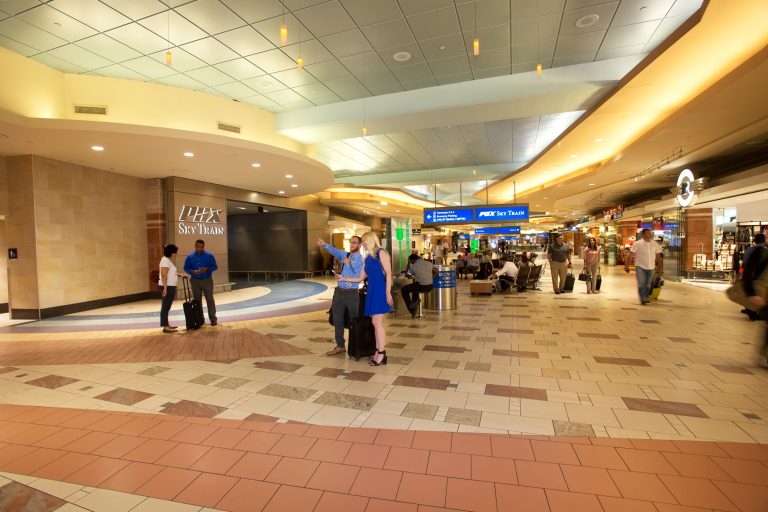 With Thanksgiving and the arrival of winter visitors drawing near, Gov. Doug Ducey announced new efforts to help prevent the spread of COVID-19 from travelers and assist Arizonans most affected by the disease.

“I know many in our state are asking: When will it end? The answer is: That’s not on the horizon. Arizona and our nation remain in a public health emergency,” Ducey said.

In a news conference Wednesday, Ducey and Dr. Cara Christ, the director of Arizona Department of Health Services, addressed holiday travel, the steep rise in Arizona’s caseload and the issues facing schools and hospitals in months to come. Christ also announced new Thanksgiving guidelines that encourage families to celebrate outside, reduce the size of gatherings, wear masks, maintain social distance and wash hands often – or celebrate virtually if relatives are immunocompromised or have recently been exposed to COVID-19.

“Arizonans have been good at following the guidance,” Ducey said, “but Arizonans aren’t the only ones here anymore. We have thousands of people arriving from the Midwest, East Coast and more.”

Ducey said the health department plans to assist the state’s major airports – Phoenix, Tucson and Mesa – in launching voluntary test sites to provide rapid results for travelers arriving from out of state.

“We believe that if there is testing and it’s easy and there is a rapid response, we’ll have more participation,” Ducey said.

Ducey also took a moment to address Arizona’s historic election and the escalating threats against Secretary of State Katie Hobbs, her family and her office. The two-term Republican governor sharply condemned violence and intimidation, saying allegations of election irregularities will have their day in court.

COVID-19 case numbers in Arizona have risen to 283,102, with 3,206 new cases reported Wednesday, state health officials reported. Since the pandemic began in March, 6,365 Arizonans have died, including 53 new deaths reported Wednesday. During the news conference, Ducey called for a moment of silence and prayer for those who have died.

“We can’t stress this enough, we recommend that all Arizonans wear masks in every setting,” Christ said. Ducey, who declined to enact a statewide mask mandate last spring, told reporters Wednesday that 95% of Arizonans are required to wear masks under local mandates, and those rules need to be followed.

Ducey also announced that $25 million will be awarded to hospitals to help boost staffing and give direct-care employees bonuses as the pandemic continues.

On schools, Ducey said Christ will release an emergency measure to ensure schools are following mitigation policies on school grounds and school buses.

“I want parents to have options, and one of those options should be in-person learning,” he said.

Ducey on Wednesday issued an executive order that will allow employers to require employees to get the vaccine when one becomes available.

“We are anticipating by the beginning of the year to have a COVID vaccine in Arizona,” Christ said.

The executive order takes into consideration the need for institutions to communicate to better serve those receiving the vaccine, which will require two doses administered 21 to 28 days apart, she said.

Ducey said vaccines initially will be administered to first responders and long term care patients and other vulnerable populations.

“I’m thinking of the Native American community and the other communities more affected by this,” he said.

“Just recently the state of Utah, the governor there, issued a mandate on masks, but not Arizona – why?” Nez told Cronkite News on Tuesday.

The Navajo Nation remains under a shelter in place order until Dec. 6.

Early in the pandemic, the tribe implemented curfews and restrictions that were far stricter than Arizona state orders, to keep those who live on the reservation safe. But half of Navajos live off the reservation and many come back to help, Nez noted.

“There are family members who want to help our elders hunker down and get ready for the winter hauling wood, getting grocery ready,” Nez said.

He said the Navajo government can’t guarantee people’s safety once they leave the reservation because there are different restrictions in other parts of Arizona.

Nez said family gatherings have caused an increase in cases, but beyond the reservation, leaders could help reduce the number of cases by adopting the same restrictions the Navajo Nation has in place.

“Until then, this is going to be the new norm I think. Outbreaks happening every so often until there’s a vaccine,” Nez said, although he suspects some people will refuse to be vaccinated.

“I think wearing a mask is going to be the new normal. Are we prepared for that? That’s the question that we all got to ask ourselves during this public health emergency,” Nez said.