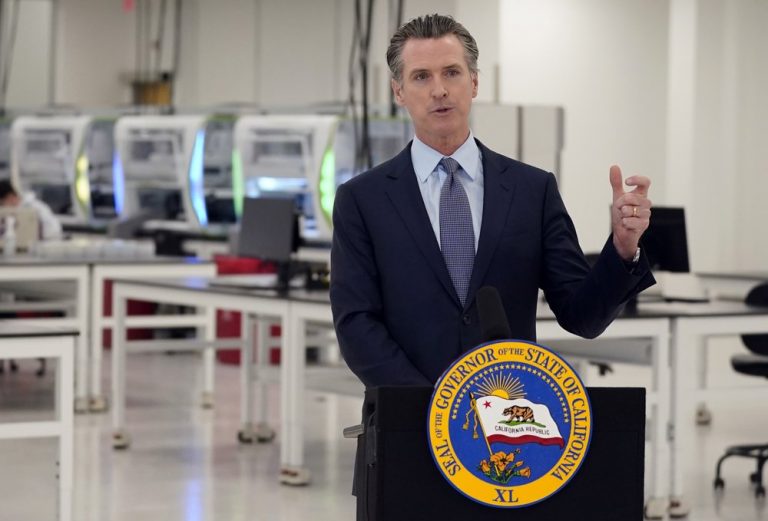 California Gov. Gavin Newsom on Monday apologized for what he called “a bad mistake” in attending a birthday party that broke the very rules that he has been preaching to slow the spread of the coronavirus.

He has suffered severe political backlash since it surfaced Friday that he and his wife attended the party Nov. 6 with a dozen friends at the pricey French Laundry restaurant in wine country north of San Francisco.

Newsom’s apology came as some legislators from California reportedly made a trip to an annual political conference in Hawaii.

Newsom said he realized as soon as he sat down at the outdoor table that the group was larger than he had expected to celebrate the 50th birthday of Jason Kinney, a political adviser that Newsom said he has known for 20 years.

“I made a bad mistake,” Newsom said. “I should have stood up and … drove back to my house.

“The spirit of what I’m preaching all the time was contradicted,” he added. “I need to preach and practice, not just preach.”

The lapse came just as California is seeing a surge in coronavirus infections and hospitalizations, and as health officials lobby residents to skip traditional Thanksgiving and holiday gatherings or self-quarantine if they travel out of state.

State and local officials have largely blamed recent increases on such social gatherings, and media experts said Newsom’s failure to abide by his own rules may have hurt his credibility just as the state is trying once again to tighten them. Newsom announced Monday that more counties will move more quickly into increased business restrictions as the state tries to head off a further spike in cases.

Newsom said he is concerned that he may have undermined his own message.

“So that’s why you have to own it, and you have to be forthright and I’m doing my best every single day in trying to model better behavior,” he said.

D’Lee Daleo, co-owner of Switch Fitness in Elk Grove, put Newsom’s action in the same category as U.S. House Speaker Nancy Pelosi getting her hair washed and blow dried at a San Francisco salon in late August, at a time when the city was not allowing indoor beauty services because of the pandemic.

“They have no idea what it’s like to be a regular person who wakes up every day and goes to work,” said Daleo, who has been struggling to keep the boutique fitness studio open when gyms are only allowed to open outdoors with modifications. “It shows they’re elitist, and we’re just little peons who are supposed to do whatever they tell us to do.”

Newsom’s fellow Democrats were silent, while Republican state lawmakers quickly took to Twitter to make fun of his apology.

Jot Condie, president and CEO of the California Restaurant Association, defended Newsom’s attending the dinner even as he criticized the state for increasing indoor dining restrictions.

“Dining at a restaurant is likely to be safer than gathering with others at a home,” he said in a statement. “So, hats off to the governor for choosing the safer option.”

Newsom said it was the first time he has been out to eat with more than just his wife, though he’s been on outings with just her twice.

“This has not been a practice I’ve indulged in the in the past,” Newsom said during his regular weekly public briefing, four days after initially issuing a statement saying he erred. ”I take very serious what we’re promoting.”

The five-day event, which includes policy discussions and schmoozing with corporate sponsors, is smaller this year, about a third of its usual size, said Dan Howle, chairman of the Independent Voter Project. Organizers booked about 50 rooms and have about 120 people staying at the Fairmont Kea Lani on Maui’s southwest shore, he told the San Francisco Chronicle.

“Somebody has to be first to say, ‘OK, we’re going to do a group event safely,’” Howle said. He added the group did not decide to go ahead with the conference until last month, when Hawaii relaxed its travel policy so people could visit the state if they had a negative coronavirus test within 72 hours before arriving.

Howle declined to name the attendees, but said there were fewer than 20 lawmakers from the three states. The remainder of the guests include legislators’ spouses and other family members, as well as representatives of businesses and trade groups that pay thousands of dollars to gain access to lawmakers who may later be voting on bills affecting their industries.

A spokeswoman for Senate President pro Tempore Toni Atkins told The Associated Press the office was not aware of any senators attending the event.

Spokesmen for Assembly Speaker Anthony Rendon, a Democrat, and for Senate Republican Leader Shannan Grove and Assembly GOP Leader Marie Waldron said they were not personally attending, but did not comment further.

PrevPreviousHate crimes in US reach highest level in more than a decade
NextOpinion – A COVID Vaccine: The End of the BeginningNext