Burned acreage up sharply, as Arizona 2020 wildfire season winds down 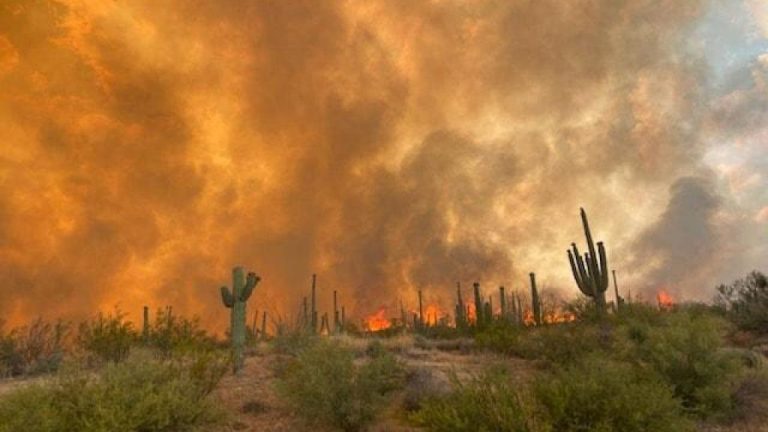 The acreage torched by wildfires in Arizona was up sharply this year, but fire officials said it was still not a particularly bad season in terms of lives lost and structures burned in the blazes.

The 2020 wildfire season had burned just under 955,000 acres as of Wednesday, according to the Arizona Department of Forestry and Fire Management, That’s almost double the 520,000 acres that burned in 3,627 fires over the previous two years combined.

The state recorded 2,357 fires statewide this year, of which 1,919 were caused by human activity.

“We don’t say there’s a fire season in Arizona anymore, because we are seeing fire activity in January, February, April and November,” said Tiffany Davila, public affairs officer for the Arizona Department of Forestry and Fire Management. “We are seeing fires year-round now.”

But unlike other Western states, Davila said Arizona has had only one confirmed fire-related death this year – when the pilot of a helicopter bringing supplies to the Polles fire was killed in the crash of his aircraft – and “multiple” structures burned. California, by comparison, recorded 31 deaths and 10,488 structures damaged or destroyed by wildfires that have burned almost 4.2 million acres so far this year.

“We’ve had examples this year in Arizona, large fires that were quite destructive, and also large fires that are burning entirely within the range of variation that you would expect prior to white settlement of the West,” said Joe Trudeau, a Southwest conservation advocate at the Center for Biological Diversity.

Trudeau said there is “a tendency to equate all large fires with bad fires. And that’s not necessarily the case.”

“We have a range of fires out there,” he said of this year’s season. “Very uncharacteristically severe fires, and then fires that are pretty much exactly what we want to see happening on the landscape.”

Experts blame the intensity of this year’s fires on the relatively dry monsoon seasons of the past two years, which have created conditions that help fires spark and spread.

“It all goes back to the lack of moisture we had over the winter,” Davila said.

While fire season usually ends in mid-July, the state was still battling several large fires into October. That could put fire prevention plans for 2021 at risk, as fire crews are forced to spend time and resources fighting fires now instead of doing the forest thinning and prescribed burns that could reduce potential fuel for next year’s fires.

“The risk doesn’t go away. Because we weren’t able to get anything done this year, it means that just means we have this year’s risk on top of next year’s risk,” said Colavito.

Colavito said wildfires cannot be completely prevented – nor should they. Overgrown forests create conditions that allow for catastrophic fires if one breaks out, she said.

She and others point to efforts like the Four Forest Restoration Initiative (4FRI), a federal initiative that seeks to manage 2.4 million acres in the Coconino, Kaibab, Tonto and Apache Sitgreaves national forests. It’s an effort whose time has come, said Rep. Tom O’Halleran, D-Sedona.

“Forest management has long been on the backburner at the federal level, which has led to devastating loss of life this year and contributed to the scourge of wildfires we’ve seen across the desert Southwest this past decade,” O’Halleran said in a statement released by his office.

But fire, in a forest that is properly maintained, can be beneficial to the overall environment, Colavito said.

“I equate it to, like a predator, a wolf. If you remove all the wolves from a landscape, you have a lot of smaller species that kind of grow up in abundance,” Colvaito said. “Fire is essentially a keystone process in these systems that helps to maintain its health.”