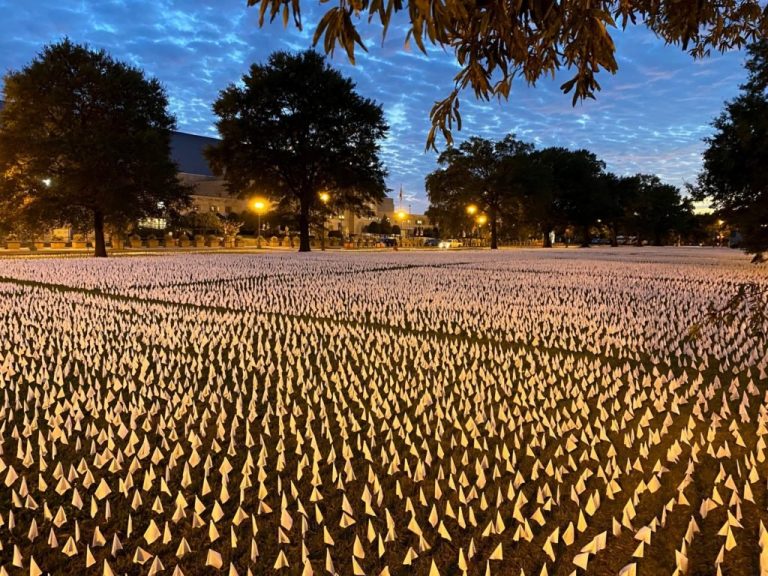 The hardest part of Suzanne Firstenberg’s day is when she changes the numbers on the board – each number representing an American who has died as a result of COVID-19.

She climbs on a concrete ledge, pulls off a large poster with one number on it and replaces it with a higher number – 241,949 as of Thursday – on a billboard in front of a field of nearly as many little, white flags, each representing a victim of the pandemic.

It’s all part of Firstenberg’s exhibit, “In America: How could this happen…”, an installation that sprawls over the parade grounds at the D.C. Armory. Firstenberg said she was inspired to create the exhibit “to help people understand the number, to make sense of it.”

“So that we would not just release it (the death toll) and say, it is what it is, but rather, we would be inspired to take care of each other,” she said recently.

It comes as the number of new cases is spiking across the country, with more than 100,000 new cases every day for the past nine days, according to Johns Hopkins University’s Coronavirus Resource Center.

The trend is reflected in Arizona, where cases have started to surge again after falling sharply from this summer, when the state was a national hotspot for the spread of the disease.

The Arizona Department of Health Services reported 13,795 new cases since last Friday, an average of 1,970 new cases a day, and 153 deaths in the same period. Since the start of the pandemic, Arizona has recorded a total of 266,562 COVID-19 infections and 6,240 deaths, according to health department data.

Firstenberg said her experience as a hospice nurse for 25 years impressed on the value of each human life, something she hopes her installation can help people understand. People like the Sneeds.

“To see all these flags representing some family’s pain, it’s moving,” said Leigh Sneed, a Virginia resident who was visiting the installation with her husband, Mike, on a recent morning.

Mike Sneed came at his wife’s insistence, but did not realize the impact seeing the flags would have on him.

“It’s amazing, and it’s very disturbing when you actually come here and you see the flags and you realize each flag represents a person who died,” he said.

Visitors are encouraged to walk through the neat rows and columns of flags placed on the field, sit on benches or just stand and experience the vastness of the art.

“When people visit, they take a break and just take it all in,” said Firstenberg.

The exhibit is also interactive – people can inscribe messages and names on the flags. Firstenberg said she wanted each life lost to be a single unit, so all of the flags installed on the field are identical white ones.

For people who can’t visit in person, there’s a livestream available, but Firstenberg said that people who visit “give value and life to this space.”

The installation was initially to close Nov. 6, but city officials extended it through the end of the month.

“It gives more people time to participate in the creation of the art, and it gives us more time to figure out how next to honor all the people we’ll continue to lose,” said Firstenberg.

The Sneeds hope the exhibit shows people that the virus is “real and it’s not anything fake,” and will encourage more people to wear masks and take other precautionary measures.

Firstenberg just hopes that being able to visualize this number “can make us stop a minute and think of each other.”

PrevPreviousStates ramp up for biggest vaccination effort in US history
NextForecast calls for drier, warmer winter to follow ‘non-soon’ summerNext