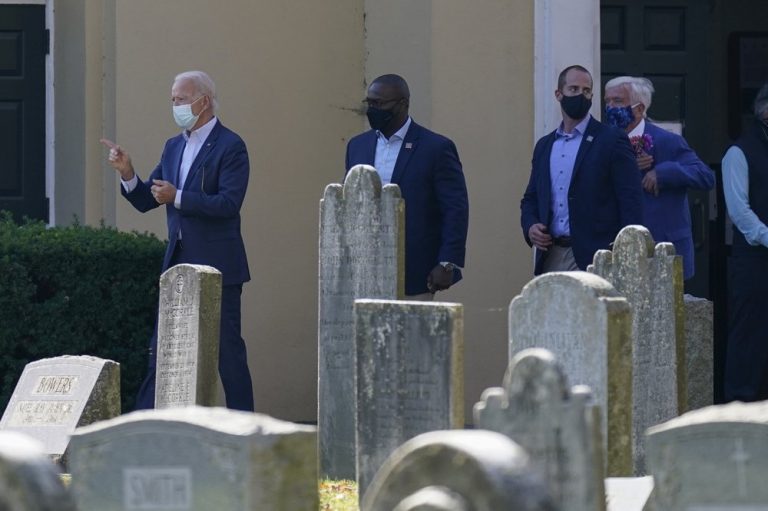 The messages in Christian houses of worship on the first weekend since the election were as divided as the country’s electorate, with religious leaders mostly calling for peace and unification even as some bemoaned the result and others celebrated.

Hours after the news broke Saturday of Democrat Joe Biden’s victory, St. Joseph on the Brandywine Deacon Michael Stankewicz led a prayer during afternoon Mass at the president-elect’s home church in Wilmington, Delaware, in which he asked “that our newly elected officials lead with wisdom and integrity to bring about unity, peace and reconciliation in our country and around the world.”

In Oklahoma, which voted for President Donald Trump by a 2-to-1 margin, civil rights activist and minister Warren G. Blakney Sr. started the Sunday morning service at North Peoria Church of Christ by noting the toll the virus is taking on his hometown of Tulsa and mourning the death of a church member the day before.

He offered an exultant message of political change to parishioners, saying the election provides the catalyst “to begin to celebrate a new era.”

“Aren’t you glad that 74 million hearts don’t want that stuff no more? I voted for change. I know that in January better days are coming,” Blakney said, shouting to make himself heard over the car horns being honked in agreement by worshipers attending the parking lot service.

Other faith leaders sounded a note of concern.

Pastor Matt Hagee of Cornerstone Church in San Antonio lamented a troubled world, and said “the cure,” which was the main theme for his Sunday sermon, was Jesus Christ.

Without explicitly naming the president- and vice president-elect, he criticized public officials, abortion and what he called censorship of “the word of God.” Last year, Biden shifted his stance on abortion to back an end to restrictions on government funding for the procedure.

His father, prominent megachurch pastor and conservative activist John Hagee, returned to Cornerstone on Sunday after being diagnosed with COVID-19 last month. The 80-year-old pastor has been a staunch supporter of President Donald Trump.

During a brief appearance on stage, he told worshipers to dream big and “expand the tent,” and cited political reasons in extolling the church’s educational work.

“We built a world-class school for our young people who are going to become the leaders of tomorrow, who are not infected with the socialist ideas that children are hearing now in public schools,” he said.

The elder Hagee later lamented the “miserable year” and challenged congregants to “forget it” and move on.

“Go home today, take a shower and shake it out of your hair,” he said. “Turn off the fake news, and start expecting God to do a good thing.”