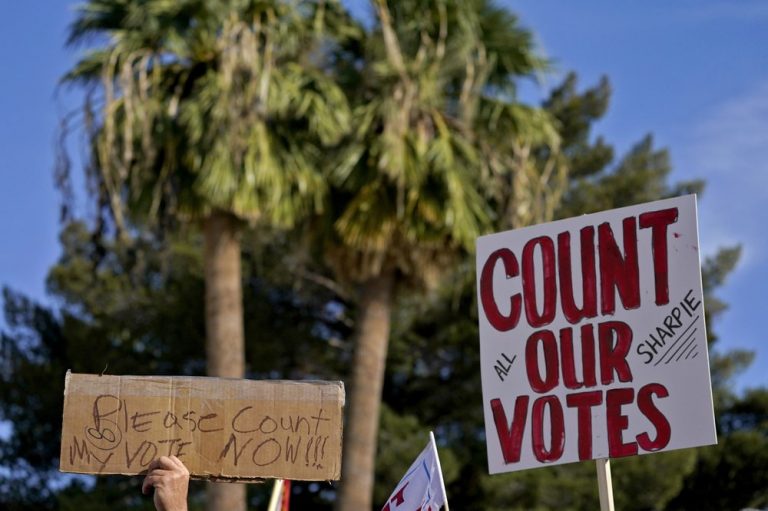 The popular marker has been cited in social media claims as part of a clever strategy to invalidate ballots by using Sharpies, because their ink reportedly cannot be detected by ballot scanning machines. That claim has since been picked up by at least two Arizona elected officials calling for answers.

But Arizona Secretary of State Katie Hobbs has a ready answer: It just ain’t so. The pens are used because their ink dries quickly, she said, and any ballot marked with one will be counted.

“IMPORTANT: If you voted a regular ballot in-person, your ballot will be counted, no matter what kind of pen you used (even a Sharpie)!” Hobbs said in a tweet Wednesday.

She was responding to a video that began circulating election night on Facebook. The video – since flagged by Facebook as “false information” – shows a woman describing how Maricopa County poll workers gave voters Sharpies to fill in their ballots, which she claimed tabulation machines were subsequently not able to read.

“Sharpie-gate” began to spread on social media, with people who said they voted in-person and later checked their vote status, had it come in as “canceled.” They blamed the pens.

“We use Sharpies on Election Day because it is the fastest-drying ink,” Gilbertson said, “As the voter is marking the ballot, we need to make sure that when they put it through that precinct-based tabulator that the ink does not smudge.”

“We have received hundreds of voter complaints regarding the use of Sharpie brand markers to fill out ballots on Election Day at voting centers in Maricopa County,” Arizona Deputy Solicitor General Michael Catlett wrote Wednesday to the Maricopa County Elections Department.

“Voters are concerned that the use of Sharpies may have caused their ballots to be rejected, spoiled, or cancelled,” Catlett wrote. He asked for information on which polling sites used Sharpies and to what extent were they used.

The story was also picked up by Rep. Paul Gosar, R-Prescott, who, fresh off an election night victory, took to Twitter to push back against fact checkers, like the Associated Press and the Arizona Republic, who he said were missing the point.

“The issue is that hundreds of people who voted with Sharpies have checked online and their votes were not counted,” Gosar wrote. “There may be an issue with the machines reading the Sharpie.”

But Hobbs said there could be other reasons for “canceled” ballots, including someone who asked for a mailed ballot but decided to vote in person. The mail-in vote would be canceled, which would show up in a check of the county’s Ballot-by-Mail/Early Ballot Status update, but the in-person vote would still be counted, Hobbs said.

In past Maricopa County elections, Sharpies were discouraged because they could bleed through the arrow-style ballot used by the county until 2019. That could have shown up as a ballot mark on the backside of the form.

“In 2019, the Maricopa County Elections Department invested in new tabulation equipment and along with that equipment came a new ballot style,” Gilbertson said. “Those ballots have offset columns so if a voter marks the ballot and the ink bleeds through to the backside it would not impact tabulations.”

So Sharpies are OK now for elections officials. But not for Arizona Attorney General Mark Brnovich.

“Confidence in our elections is paramount. Rumors are not helpful,” Brnovich said on Twitter, where he encouraged people with legitimate voter fraud information to report it. “If you have evidence of voter fraud, file an election complaint with our office.”

PrevPreviousIs It Time to Pull the Plug on Political Polling?
NextArizona’s renewable energy future at play in Corporation Commission racesNext