Proposition 208 ahead in early returns; would provide school funds that legislators have not 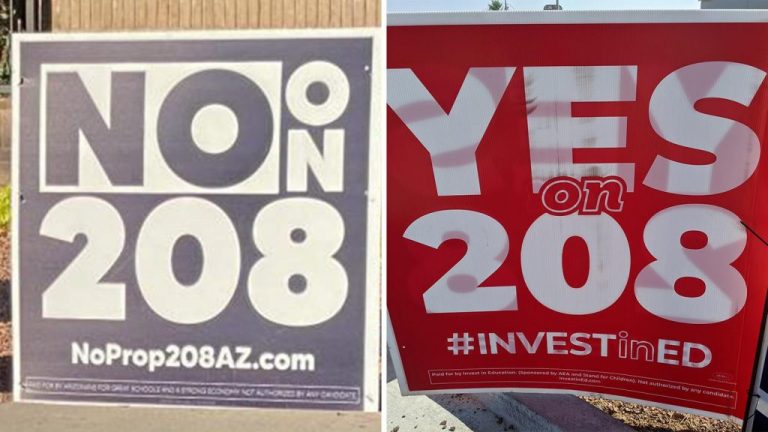 Proposition 208 appeared poised to succeed Tuesday night, leading by more than 175,000 votes by 11 p.m., according to early, unofficial election results from the Arizona Secretary of State’s website.

Proponents for the legislation claimed victory Tuesday night, calling it a win for teachers and schools that would see more funding if it is approved.

Supporters argued that the citizens initiative would help ease the teacher shortage, worsened as the COVID-19 pandemic created new challenges with virtual learning and often brought longer hours for educators, prompting hundreds of teachers to retire early or leave their profession, teachers unions say. The shortage nationwide was estimated at 112,000 in 2018; educators say districts in Arizona were 7,000 teachers short at the start of the 2019-20 school year.

If approved, Proposition 208 would add a 3.5% surtax to the current rate of 4.5% on income exceeding $250,000 for single earners or $500,000 for couples – bringing Arizona’s highest income tax bracket to 8%. Fifty percent of revenue would be dedicated to hiring teachers and classroom support, 25% to hiring student support services, 10% to providing mentoring and retention programming for new teachers, 12% to the Career Training and Workforce Fund, and 3% to the Arizona Teachers Academy Fund.

The proposition would allow districts to hire more teachers and raise salaries of a workforce that is at high risk during the pandemic in a state that consistently ranks low on teacher pay, school funding and student performance.

The proposition follows the Red for Ed movement, which staged teacher walkouts in 2018 to press a series of demands, including a 20% raise for teachers. In response, Gov. Doug Ducey agreed to incremental pay hikes and additional school funding. But in response to the Great Recession, Arizona cut funding for K-12 public schools more deeply from 2008 to 2015 than any other state – and those dollars have not been fully restored, according to the Arizona Republic.

Opponents argue that small businesses are just beginning to recover from the economic repercussions of the COVID-19 pandemic and this is not the time for tax increases. Supporters argue that few small businesses would be subject to the surtax, and that the Legislature has failed Arizona schoolchildren for years.

Invest in Education, also known as Yes on 208, is leading the campaign in support of the proposition, and Arizonans for Great Schools and a Strong Economy is leading the opposing campaign.

“Let’s address the decades of cuts to education funding in Arizona and invest in our schools, teachers, and kids,” Sanders said in a post on Medium.

“Invest in Ed will put $940 million in new funding into Arizona classrooms each year – funding the Legislature can’t touch,” Gallego said in a statement to Cronkite News. “Arizona’s students and teachers need this money. Our teacher shortage is worsening, and we have some of the largest class sizes in the nation.

“Not only that, but an investment in education is a long term investment in Arizona’s economy and future. Our school system has too long been underfunded, and Prop 208 will help remedy that.”

“Right now, Arizona’s small businesses are recovering from the economic harm done by the COVID pandemic,” Ducey said. “This tax increase is estimated to cost taxpayers around $1 billion annually. That’s a whopping amount, especially considering that our economy is recovering from recession and high unemployment.”