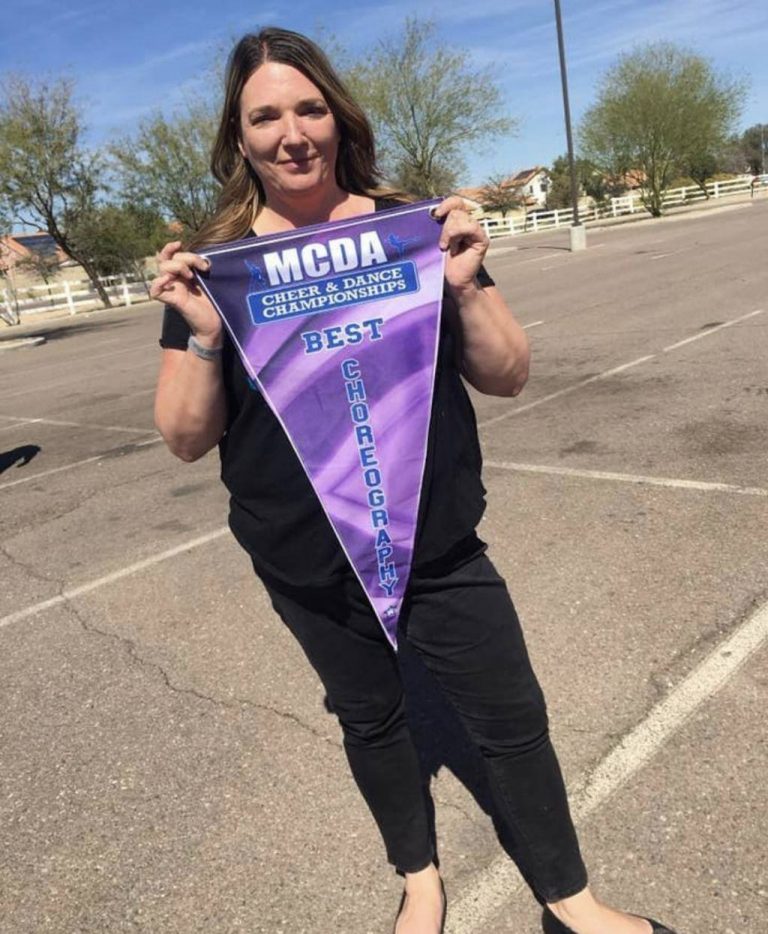 Elicia Morigeau, a mother and businesswoman always had a dream of starting a small competitive cheer team in her community.  Watching her very own daughters cheer and coaching a competitive cheer team in California are some of the happiest memories Morigeau cherishes.  In 2018 her youngest daughter was in her last year of cheer and she knew this was the time, she had to make a jump and kick start her dream.  What was just a glimmer in the back of her mind was about to turn into more than she could have imagined.

Morigeau’s dream was not only to form an award winning team, but a team that would allow youth in the community to participate in a sport that was affordable, fun and a place where athletes felt they were making a mark in their community.  Morigeau sought others in the community who would be interested in forming a team.  This is when the evolution of Coach Elicia began and the Quad-City Storm Elite competitive cheer team was established.

Each season brought more wins and recognition throughout Arizona.  Coach Elicia’s dream of a successful team seemed complete.  The only thing left was finding a permanent home to display the success the first two seasons brought and its future successes.  This season, along with the highest enrollment the team has seen, it also opened a permanent gym, a home for Storm Elite.

Coach Elicia has made an impact with each athlete that has been involved or still a part of the team.  Many of Coach Elicia’s athletes nominated her for the Greatmats “2020 Coach of the Year Award”.  These athletes shared the impact Coach Elicia has on their daily lives as a Coach and out of practice as a mentor.  Some comments submitted by athletes for her nomination are detailed below.  There is no doubt these athletes look up and respect their Coach.

“Elicia Morigeau has been a role model for me for such a large part of my life. She deserves this because she puts in limitless hours into perfecting the routine every year. She has sacrificed so much for Storm, just so they could feel confident and have a killer routine on the mat. I graduated from the team in 2019 but I still visit the team because Storm is a family and it always will be. My little sister has started at Storm, she loves it just as much as I did. Outside of the team and all of the late-night practices, Elicia was like family to me and we had a very close bond. She’s helped me through so many things in life and she does that to everyone she encounters. She has such a kind soul and anyone that meets her will say the same”.

Another athlete added, “Elicia is an amazing coach with a big heart. She does so much for our athletes, and we are so glad she is ours”.

“She is the most amazing coach in the entire world. She has been there for me throughout my entire high school journey and has helped me so much to both gain so many cheer skills and to grow as a person. She truly is the best coach anyone could ask for”.

“She always is there for us inside of cheer and outside of cheer, no matter the time or what’s going on she’s there for us. She really puts her whole heart into the organization from the hours and hours it takes coaching 4 teams, taking time from her weekends and days off to help move into a building and make it our own, the hours she spends at home making the routine and thinking about what she can add to give us the best chance to win. We are like a family and without her we wouldn’t have a mom in this family she truly opens her heart to all of us and makes sure we feel loved just like her own kids. She makes sure we do community work such as helping with fairs and doing shop with a cop during Christmas time. She is changing the way our small town thinks of cheerleaders and cheer teams”.

We encourage our community to log in and vote for this amazing Coach who has made a great impact in the youth within our community. The official voting takes place November 2-16, 2020. Click on the link below and select “Vote” below Elicia’s picture. https://www.greatmats.com/2020-greatmats-national-cheer-coach-of-the-year.php