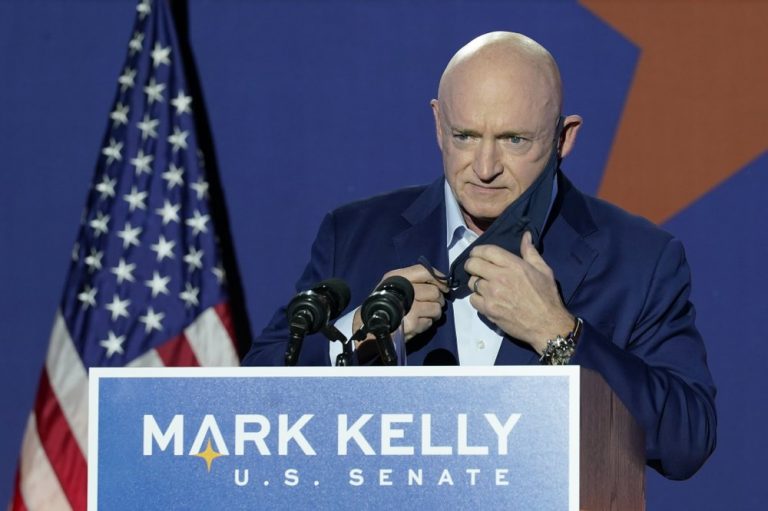 Democrats have been asking the question for a long time: Is this the year Arizona turns blue? In 2020, the answer was “yes.”

Joe Biden won Arizona’s 11 electoral votes for president and Mark Kelly won a seat in the U.S. Senate, ushering in an era of Democratic leadership not seen since Republicans dominated the 1952 election in the state.

Whether Democrats would also dominate lower on the ballot was less clear — with key races for the U.S. House, the state Legislature and the state utility regulator up in the air but within reach for Democrats.

But Arizona voters decided to legalize recreational marijuana sales four years after rejecting it, going against the Republican political establishment opposed to having the state join other U.S. states with legal weed.

Voters also appeared poised to approve a tax increase for the wealthy to pay more to fund financially hurting schools. That was a strong rebuke for Republican Gov. Doug Ducey and the state’s business community that spent millions campaigning against the tax.

The outcome delighted Democrats and was sure to bring a reckoning for Republicans who have enjoyed decades of dominance in Arizona politics.

“Now people recognize that Arizona is in play, will always be in play,” said U.S. Rep. Ruben Gallego, a Phoenix Democrat who comfortably won reelection.

In turning toward friendly territory for Democrats, Arizona is following a path blazed by its neighbors Colorado, New Mexico and Nevada. It’s also the Democrats’ brightest light among the Sun Belt states they tried to flip from the GOP this year.

Arizona Democrats benefited from the state’s changing demographics — with more young people and Latinos registering, an influx of new residents from more liberal states like California and unease among some suburban women about President Donald Trump.

Adding Democrats’ gains Tuesday to their victories in 2018, the party now controls both Arizona U.S. Senate seats, a majority of the U.S. House delegation with a possibility of leading it 6-3 and two statewide offices.

The Republican-dominated state Legislature was also within grasp and so was the state’s Corporation Commission, which sets rates for electric, gas and water utilities.

In Maricopa County, where Phoenix and its suburbs are home to more than 60 percent of Arizona’s population, Democrats seemed poised to win the races for county attorney, sheriff, and to secure a majority on the Board of Supervisors.

Even at the height of GOP dominance, Arizona wasn’t a monolith. Democrats were occasionally elected to statewide office, such as Gov. Janet Napolitano in 2002 and 2006. President Bill Clinton won Arizona in his 1996 reelection bid.

But never in memory have Republicans been so far back on their heels.

Arizona voters turned their back on Trump, McSally and Ducey because they failed to lead, said Chuck Coughlin, a longtime Republican political consultant.

“Trump’s Republicanism is not Arizona Republicanism…Our tent is bigger than that. He keeps shrinking the Republican party into a mirror of the Democratic party, of identity politics of the right, rather than being about ideas and coalition building.” Coughlin said.

Errors made by the state’s Republican leaders included relentlessly cutting taxes even though the growing state needs more revenue for schools, healthcare and infrastructure, and not handling immigration reform, he said.

Republicans weren’t ready to concede on Wednesday, believing they could still win enough of the uncounted ballots to put Trump and McSally over the top. Ducey tweeted that it was premature to conclude that Democrats have won.

The Associated Press called the presidential race in Arizona because the remaining ballots left to be counted, including mail-in votes in Maricopa County, where Biden performed strongly, were not enough for Trump to catch up to the former vice president. Kelly’s lead was even larger than Biden’s.

Republicans who turned out for an election-eve rally at the state GOP headquarters on Monday were baffled that their solidly red state turned into competitive territory.

“It’s tough to figure out,” said David Tometich, a 55-year-old store owner from the Phoenix suburb of Chandler. “I hope it’s not just people moving in from other states. I hope that’s not it. We need to keep the state red.”

Sara Cabirac, a 65-year-old commercial real estate appraiser from Scottsdale, thinks years of relentless attacks on McSally, starting in 2018 campaign and barely letting up, had an impact.

“I don’t think the state has changed so much that they really want two Democratic senators,” Cabirac said.

Registered Democrat Jeff Gusoer, a Phoenix resident who manages strip clubs in other states, said he flew home from St. Louis to vote for Biden and try to ensure Trump did not take Arizona.

“He’s mishandled the coronavirus but it’s so much beyond that,” said Gusoer, 34, who had COVID-19 in April and has since recovered.