As most House members head to reelection, Schweikert trails Tipirneni 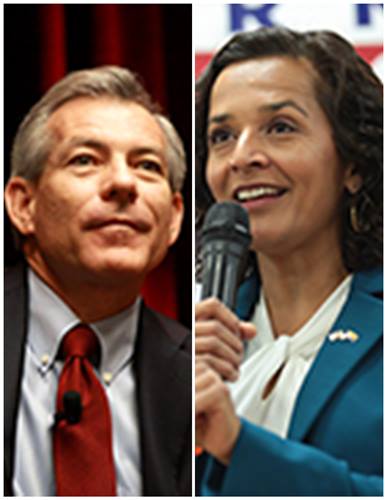 With 97% of precincts reporting, Tipirneni had 162,976 votes to 152,381 for Schweikert, giving her a 52-48 percentage point lead in the race. Tipirneni said Tuesday night that she was “exactly where we hoped to be at this point in ballot returns,”

“Based on our projections, this sends us on a trajectory towards victory, but we’re not going to declare anything,” she said. “We want to make sure that every single ballot is counted, we want every single voice to be heard.”

Schweikert was the only incumbent among Arizona’s nine-member House delegation who was trailing on Election Day. His campaign could not be reached for comment Tuesday.

Rep. Tom O’Halleran, D-Sedona, had the narrowest margin among the state’s remaining incumbents, leading Republican Tiffany Shedd 52-48. No other incumbent had less than 55% of early return votes, while Rep. Ruben Gallego had an astounding 78% of the vote in his 7th District re-election bid.

The 6th District race turned into the most expensive in the state, with Tipirneni raising $5.4 million to Schweikert’s $2.0 million. Even though Republicans held a registration advantage in the district, it was considered a pick-up opportunity for Democrats because Schweikert had been the subject of a House ethics probe over his use of office funds and campaign funds.

In June, Schweikert admitted to 11 counts of campaign finance violations, misuse of congressional office funds and more. He was reprimanded by the House Ethics Committee and fined $50,000, in the case.

“Normally this should not be a competitive district,” said Mike Noble, chief of research for OH Predictive Insights. “But it is the case, and it kind of sums up 2020, we’re in upside-down world.”

Tipirneni still had her work cut out for her, in challenging a well-known, five-term Repuliican incumbent in a heavily GOP district. But Tipirneni, who twice lost challenges to Rep. Debbie Lesko, R-Peoria, had her prodigious fundraising ability on her side.

“The amount of money she has been able to raise has been very prolific, and I think people are paying attention,” said Paul Bentz, senior vice president of research and strategy for HighGround Public Affairs.

Bentz added that the funds raised by Tipirneni show that Democrats on a local and national level were paying attention to this race.

But experts say that for a district that leans Republican by 13 percent, Schweikert is in hot water.

“She has the best chance of anyone, of potentially flipping it,” Noble said. “However, it’s really hard to count Schweikert out because he’s from the district, he’s always worked the district pretty well — he’s pretty well known and liked.”

The only other Arizona House race that had not been called by Tuesday evening was the sprawling 1st District, where O’Halleran, a Democrat, was holding off a challenge from Republican Tiffany Shedd.

If Tipirneni’s lead holds, however, it would shift the makeup of the state’s House delegation from 5-4 Democratic to 6-3. That could shift yet again in 2022, when the state will be required to draw boundaries for new congressional and legislative maps.

“I think Arizona is going to be a battleground for the next 10 years,” Bentz said. “I don’t think it’s reliably blue, I think we are going to see some gains by Democrats in this election but those are not long term gains depending on how democrats act when they get into power.”

PrevPreviousClaim that Sharpie pens ruin Arizona ballots misses the mark
NextProposition 208 ahead in early returns; would provide school funds that legislators have notNext