Campaign donors gladly put their money where candidates’ mouths are 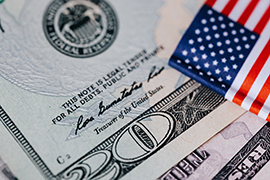 All politics is local, the saying goes. But it’s also personal for the individual donors who put their money – often only a few dollars at a time – where their candidates’ mouths are.

Donors like Norma Wolford of Surprise, who made 43 separate donations to President Donald Trump’s re-election bid. Or Truly Bracken of Prescott, who donated to Democratic nominee Joe Biden’s campaign on 162 different occasions.

They are among the thousands of Arizonans who helped Trump and Biden raise $22 million in Arizona, according to the most recent campaign filings with the Federal Election Commission. That’s just part of the $25.7 million raised in the state by all presidential candidates over the course of this election.

A sizable portion of those donations came from small amounts strung together by people who want to see their preferred candidate take office – people like Wolford and Bracken, who said they felt compelled to help their candidates.

“I’ll do anything to get him elected, he’s like family,” Wolford said of Trump.

The 88-year-old “Christian woman” and retired high school teacher was in the front row cheering last week when Trump made a campaign stop at the Phoenix Goodyear Airport. She said Trump is “what this country needs” and that he has proved that over his first term.

Don’t tell that to Bracken,

The “lifelong Democrat” is a retired environmental attorney who said she was unable to be politically active before because of her work with the Environmental Protection Agency.

“So, I’m making up for lost time now,” said Bracken, who also volunteers in addition to making donations to the campaign. “We have to do more, and I’ve done more.”

“I’m 71 and I’ve always voted in presidential elections,” Bracken said. “This is the most important election of my life.”

Bracken backs up her words with her wallet. From Nov. 7, 2019, to Oct. 14, 2020, Bracken made 162 donations to the Biden campaign, totaling about $3,000, according to FEC records. She has also worked the phones for Biden and works with community organizations to help get Democratic candidates elected up and down the ballot.

“I have to act, I think our democracy is on the line,” she said. “I would not feel OK if we lost this election.”

They’re not the only ones giving. OpenSecrets.org listed ZIP codes in Paradise Valley and Scottsdale as the 16th and 37th highest in the nation for Trump donations, while Biden this week listed five Arizonans who have raised at least $100,000 for the campaign.

Political consultant, Jason Rose, says Democrats have traditionally been much more successful with grassroots fundraising, and continue to do so this year.

“The Democrats have clearly been a fast mover in that important space and it really has helped them level the playing field against bigger-money Republicans,” Rose said.

Nationally, Biden had raised $937 million to Trump’s $595 million through Oct. 14, the most recent FEC filing date. But in Arizona, Trump leads, raising $13.9 million to Biden’s $8.1 million, although Biden started catching up late in the campaign.

Rose said that Democrats are capitalizing more on individual contributions, and Republicans have ways to go. He credits much of the Democrats’ success to the fundraising platform, ActBlue.

“People are just getting used to donating with ActBlue as they do with a subscription to HBO or Netflix,” Rose said.

But for donors like Wolford and Bracken, it’s more than just habit.

“To me, it’s awesome to be able to help and work with the leadership of our nation in a way to share the love of Jesus,” Wolford said.

Bracken says that of all the elections she’s lived through, “I’ve never put more of my time, money or energy in more than I have this time. I’m doing everything I possibly could.”