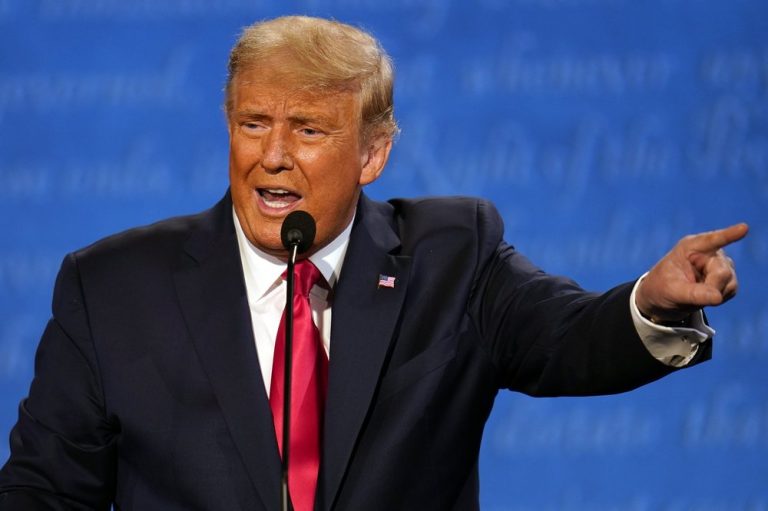 In the closing hours of a campaign shadowed by a once-in-a-century pandemic, President Donald Trump charged across the nation Monday delivering an incendiary but unsupported allegation that the election is rigged, while Democratic challenger Joe Biden pushed to claim states once seen as safely Republican.

America stood at a crossroads. Never before in modern history have voters faced a choice between candidates offering such opposite visions as the nation confronts a virus that has killed 230,000 Americans, the starkest economic contraction since the Great Depression and a citizenry divided on cultural and racial issues.

The two men broke sharply Monday on the voting process itself while campaigning in the most fiercely contested battleground, Pennsylvania. The president threatened legal action to stop counting beyond Election Day. If Pennsylvania ballot counting takes several days, as is allowed, Trump charged that “cheating can happen like you have never seen.”

Going further, Trump even tweeted about election-related “violence in the streets,” though none has occurred. Asked about it, Biden said “I’m not going to respond to anything he has to say. I’m hoping for a straightforward, peaceful election with a lot of people showing up.”

Biden, earlier in Pittsburgh, delivered a voting rights message to a mostly Black audience, declaring that Trump believes “only wealthy folks should vote” and describing COVID-19 as a “mass casualty event for Black Americans.” 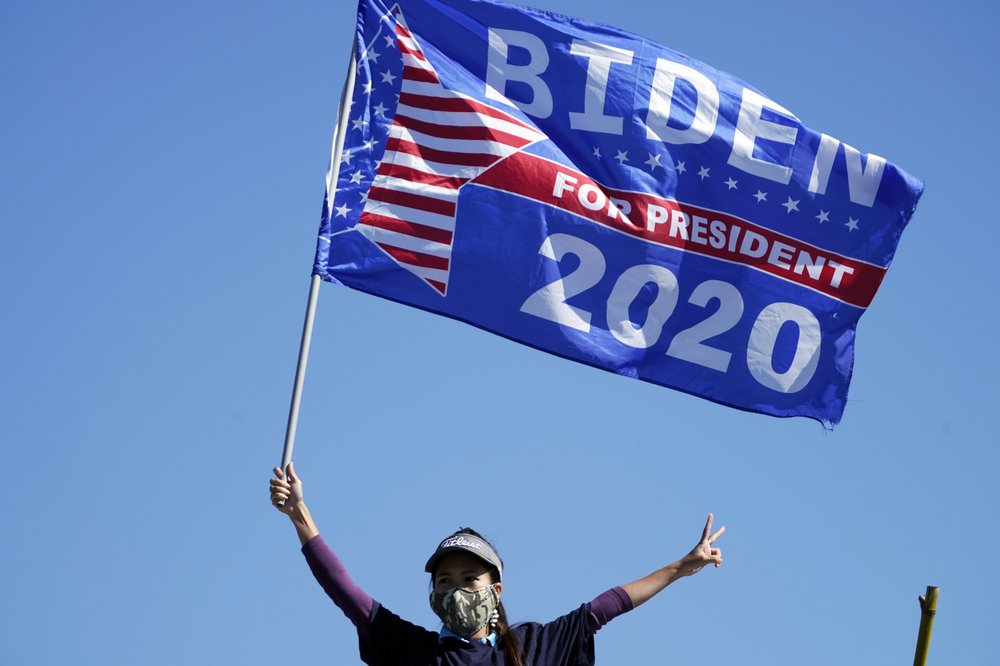 “We’re done with the chaos, we’re done with the tweets, the anger, the hate, the failure, the irresponsibility,” said Biden, whose campaign has focused on increasing turnout by Black voters, who could prove the difference in several battleground states.

Both campaigns insist they have a pathway to victory, though Biden’s options for winning the required 270 Electoral College votes are more plentiful. Trump is banking on a surge of enthusiasm from his most loyal supporters in addition to potential legal maneuvers.

Trump spent the final full campaign day sprinting through five rallies, from North Carolina to Pennsylvania to Wisconsin. Biden devoted most of his time to Pennsylvania, where a win would leave Trump with an exceedingly narrow path. He also dipped into Ohio, a show of confidence in a state that Trump won by 8 percentage points four years ago.

Biden emphasized the pandemic. He declared that “the first step to beating the virus is beating Donald Trump,” and he promised he would retain the nation’s leading infectious disease expert, Dr. Anthony Fauci, whom the president has talked of firing.

Trump, meanwhile, made only passing mention of what his aides believe are his signature accomplishments — the nation’s economic rebound, the recent installation of Supreme Court Justice Amy Coney Barrett — in favor of a torrent of grievance and combativeness. He angrily decried the media’s coverage of the campaign while complaining that he also was being treated unfairly by, in no particular order, China, the Electoral College system and rock singer Jon Bon Jovi.

“I have been under siege illegally for three-and-a-half years. I wonder what it would be like if we didn’t have all of this horrible stuff. We’d have a very, very calm situation,” said Trump at an evening rally in Michigan. “People see that we fight and I’m fighting for you. I’m fighting to survive. You have to survive.”

Later in Wisconsin, he stopped himself short in midsentence: “This isn’t about — yeah, it is about me, I guess, when you think about it.”

Biden announced an unusual move to campaign on Election Day, saying he would head to Philadelphia and his native Scranton on Tuesday as part of a get-out-the-vote effort. His running mate, Sen. Kamala Harris, will visit Detroit, a heavily Black city in battleground Michigan, and both of their spouses will hit the road too. Trump told reporters he would be visiting his campaign headquarters in Virginia, and he is also hosting family and friends on Election Night in the East Room of the White House.

Nearly 100 million votes have already been cast, through early voting or mail-in ballots, which could lead to delays in tabulation. Trump has spent months claiming without evidence that the votes would be ripe for fraud and refusing to guarantee that he would honor the election result. 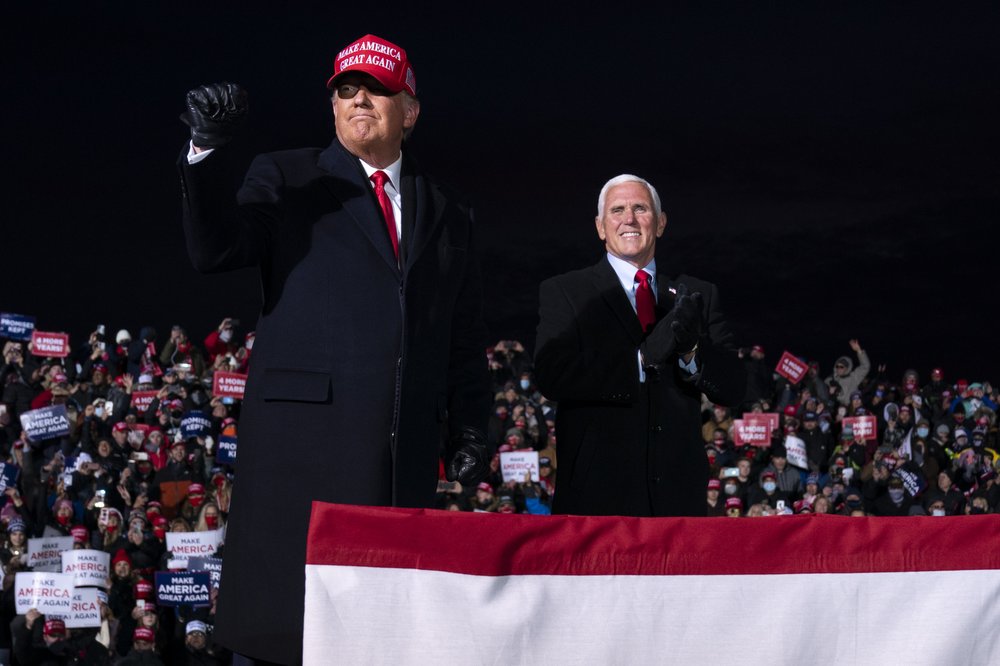 Trump also rallied in Scranton on Monday, underscoring the importance of the state’s vote-rich northeast counties, and zeroed in on the state’s process to count votes. He has used stark terms to threaten litigation to stop the tabulation of ballots arriving after Election Day — counting that is allowed with earlier postmarks in some states.

He has said that “we’re going in with our lawyers” as soon as the polls close in Pennsylvania and on Monday spoke ominously about the Supreme Court decision to grant an extension to count the votes after Tuesday.

“They made a very dangerous situation, and I mean dangerous, physically dangerous, and they made it a very, very bad, they did a very bad thing for this state,” Trump declared. He said of Pennsylvania’s Democratic Gov. Tom Wolf, “Please don’t cheat because we’re all watching. We’re all watching you, Governor.”

There is already an appeal pending at the Supreme Court over the counting of absentee ballots in Pennsylvania that are received in the mail in the three days after the election.

The state’s top court ordered the extension, and the Supreme Court refused to block it, though conservative justices expressed interest in taking up the propriety of the three added days after the election. Those ballots are being kept separate in case the litigation goes forward. The issue could assume enormous importance if the late-arriving ballots could tip the outcome.

One of Biden’s top legal advisers Bob Bauer pushed back at Trump’s promise of mobilizing his lawyers to challenge certain ballots.

“It’s very telling that President Trump is focused not on his voters but on his lawyers, and his lawyers are not going to win the election for him,” Bauer said. “We are fully prepared for any legal hijinks of one kind or another.”

Democrats also celebrated a decision by a federal judge to reject another last-ditch Republican effort to invalidate nearly 127,000 votes in Houston because the ballots were cast at drive-thru polling centers established during the pandemic.

Biden said he returned to Ohio at the urging of Sen. Sherrod Brown and other Ohio Democrats in Congress, suggesting a final, late visit could win. And the Democrats’ most popular surrogate, former President Barack Obama, made one of his final campaign stops in Georgia.

But even as Biden enjoyed strong poll numbers, the move to expand the map revived anxiety among Democrats scarred by Trump’s 2016 upset over Hillary Clinton, whose forays into red states may have contributed to losing longtime party strongholds.