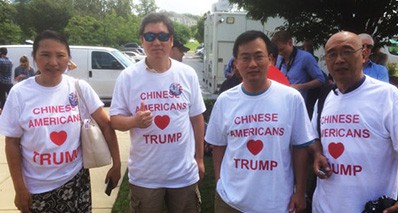 In presidential elections, the Republican Party used to win the majority of Asian votes. Now it barely wins more than a quarter.

In 2012 and 2016, the GOP’s share of Asian support was even lower than its Hispanic share. Every Asian in the Senate and Congress is a Democrat, including some of the most progressive and anti-Trump: Judy Chu, Ted Lieu, Pramila Jayapal, Kamala Harris, and Ro Khanna. In media, most prominent Asians are well left of center, such as: Christiane Amanpour, Fareed Zakaria, Bhaskar Sunkara, and Jeet Heer.

Many analysts are surprised by how left-wing Asians have become. They have many characteristics that usually indicate conservatism: above-average income, good high school graduation rates, high marriage rates, low divorce rates, high business ownership rates, low welfare use, and they commit little crime. They also are on the losing end of affirmative action and quotas, and many come from nations that have suffered Communist rule and/or Islamic terrorism.

This was true 30 years ago, when the majority of Asians voted Republican, and it is still true. What changed? In 2012, Professor Richard Posner suggested that many people vote for non-material reasons:

The voting behavior of Asian Americans appears puzzling, however, only in light of the widespread belief that people vote their interests, that is, vote for the candidate whom they think most likely to promote policies favorable to them. But many voters don’t vote their interests . . . voting is more an expressive than an instrumental act: more like applauding at a play or concert than buying a lottery ticket.

Prof. Posner suggested that many people, including Asians, see the GOP as the party of whites — especially rural and southern whites — militant Christianity, and war, and Democrats as the party of the well-educated, the urban elites, cosmopolitans, and non-whites. Asians who want to prove to themselves and others that they are well educated and culturally literate vote Democrat. Charles Murray reached a similar conclusion after Barack Obama won reelection with 73 percent of the Asian vote:

[S]omething has happened to define conservatism in the minds of Asians as deeply unattractive, despite all the reasons that should naturally lead them to vote for a party that is identified with liberty, opportunity to get ahead, and economic growth. I propose that the explanation is simple. Those are not the themes that define the Republican Party in the public mind. Republicans are seen by Asians — as they are by Latinos, blacks, and some large proportion of whites — as the party of Bible-thumping, anti-gay, anti-abortion creationists.

It is now less common than in 2012 to dismiss the GOP as the party of Evangelical fanatics. Instead, it’s more common to say it’s the party of “white grievance,” which is, if anything more offensive to liberal elites, and equally unappealing to non-whites.

Essayist Rob Henderson argues that one way American elites show off their status is through “woke” ideology about race and sex. Until recently, only universities taught this mush, and it takes an above-average intelligence to understand ideas that make so little sense. They signal that believers have the leisure to study convoluted abstractions. Asians value education, status, and money, but it takes more than money and a degree to join the liberal elite: You need to speak the language of woke academics. So Asians, many of whom are within striking distance of the upper class, have “gone woke” in their quest for upward mobility. In more race realist terms, Asians tend to be conformists, not independent thinkers, and have adopted the norms of the class they want to join.

There are two ways Asians could return to the GOP.

The first is that America’s elite, with its high number of Asians, could shift to the Right, or at least become less woke. Historically, elites tend to be conservative; America’s current ruling class is unique. In The Bell Curve, Charles Murray and Richard Herrnstein speculated that:

The tension between what the white elite is supposed to think and what it is actually thinking about race will reach something close to breaking point. This pessimistic prognosis must be contemplated: When the break comes, the result, as so often happens when cognitive dissonance is resolved, will be an overreaction in the other direction. Instead of the candor and realism about race that is so urgently needed, the nation will be faced with racial divisiveness and hostility that is as great as, or greater, than America experienced before the civil rights movement. We realize how outlandish it seems to predict that educated and influential Americans, who have been so puritanical about racial conversation, will openly revert to racism. We would not go so far as to say it is probable. It is, however, more than just possible. If it were to happen, all the scenarios for the custodial state would be more unpleasant — more vicious — than anyone can now imagine.

The elite is now white and Asian, but the cognitive dissonance is the same. As Joe Sobran said, “In their mating and migratory habits, liberals are indistinguishable from members of the Ku Klux Klan.” Upper-class whites and Asians buy houses far from blacks and Hispanics and send their children to schools with few blacks and Hispanics — as they vote for candidates who promote integration, immigration, high taxes, and lax crime laws. One day, the elite may break these dangerous habits and become conservative, perhaps dramatically. If this change happens, Asians will be a big part of it.

Asians will be more likely to vote Republican if they become middle class. Both the rich and the poor favor Democrats; the rich because of liberal posturing and the poor because of need. Right now, America’s Asians tend to be one or the other, with some groups poor and others rich (some of course are middle class). Data from the five-year American Community Survey. The national poverty rate in 2015 was 13.5. Graph from Jacobin Magazine. This “middle class gap” can be found not just between Asian groups, but within them. As Bhaskar Sunkara said of Indian-Americans, “We’re either pumping your gas or we’re performing open-heart surgery.” Asian groups with poverty rates most similar to the national average, and with median incomes within the “Republican middle class” bracket of $50–75,000 a year, such as Koreans and Vietnamese, are the ones most likely to vote Republican. Not many rich Asians are likely to “fall” into the middle class, and less-intelligent Asian groups are likely to remain lower class.

One unpredictable influence on Asian voting will be immigration. Through immigration, Asians are increasing as a percentage of the population more quickly than any other race, but no one knows how many will arrive in the coming decades or from where. Disaster, famine, and war all influence immigration and can’t be predicted. The next Democrat President may grant refugee status to the Muslim Rohingya of Myanmar and flood us with tens of thousands (or even hundreds of thousands) of them. A war between India and Pakistan would increase immigration to the United States from both countries. So would civil war in Iran. Or famine in Thailand. These peoples are all different. Today, Asians are only 6 or 7 percent of the population, so newcomers could change overall Asian averages in income, education, IQ, etc. If future Asian-Americans end up middle class, they would be more likely to vote Republican.

But this change would take time, and in any case, future Asian immigrants could be uneducated peasants rather than entrepreneurs.

A change in elite attitudes would be the quickest way to bring sanity to American politics. Asians, uncowed by white guilt or accusations of privilege, might be best suited to make that happen. Last year, Andrew Yang’s bid for the Democrat presidential nomination drew tremendous support from Chinese donors — even from those who were generally conservative, and even though he did not make a direct ethnic appeal. An eloquent and capable conservative Asian who argued that the interests of Asians were at odds with Democrat policies could attract a lot of support.

So, will Asians stay woke? Probably — but if they wake up to reality, it would be especially good for the country.

PrevPreviousEXPLAINER: A long night, or more, before president is known
NextSean Connery, a lion of cinema whose roar went beyond BondNext