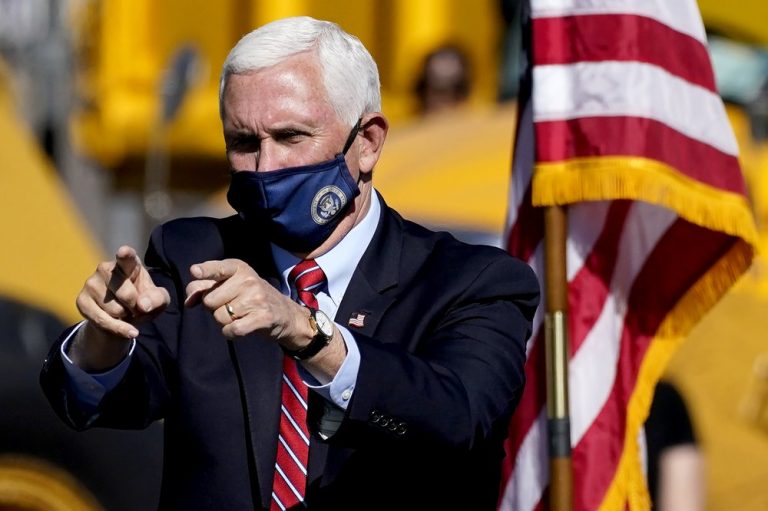 Pence’s visits to the liberal cities of Flagstaff and Tucson came as both presidential candidates focus on battleground states before Election Day. Voters in Coconino and Pima counties supported Hillary Clinton in the last presidential election, but Arizona overall helped send Trump to the White House.

Pence and a string of GOP candidates called on Arizona for a repeat this year. Arizona hasn’t voted Democratic for president since 1996.

“We need Arizona to show America that this is Trump country,” Pence told a crowd of about 500 at a private business at the Flagstaff airport.

Pence is on a multistate campaign trip despite criticism from health experts who said he should be under quarantine after a coronavirus outbreak in his office.

The White House approved the trip, saying Pence is exempt from quarantine under guidelines for essential workers. He tested negative for COVID-19.

Less than half of the people in the Flagstaff crowd were wearing masks and most were more concerned about the possibility of businesses shutting down again than the coronavirus spreading. Temperatures weren’t checked.

“If you lock down the country and destroy the economy, the nation will be worse off then if we didn’t lock down,” said Bob Scharlach, a retired tax accountant from Prescott who stopped in Flagstaff at the end of a vacation.

Pence did not mention his office’s coronavirus outbreak during his visit to Flagstaff or to Reno, Nevada, on Thursday. Trump has spoken at three rallies in Nevada and all were held in defiance of statewide guidelines limiting public gatherings.

Joe Biden and Kamala Harris have met with small groups recently in Arizona. Harris has blasted Trump’s response to the coronavirus as the “greatest failure” of any presidential administration.

Geoff Burgan, spokesperson for Arizona Biden campaign, said in a statement that the Trump campaign is panicking in Arizona “as they try to cover up Donald Trump’s failures to deal with COVID-19, which has devastated Arizona’s small businesses, workers and families.”

“Joe Biden’s going to build America back better and make sure no one making less than $400,000 will pay more in taxes,” Burgan said.

Pence was met with cheers from supporters in Flagstaff as he highlighted tax cuts under the Trump administration, rollbacks of environmental and other regulations, the border wall and a focus on keeping jobs in the United States. The choice Tuesday is between a Trump boom and a Biden depression, he said.

Pence challenged the crowd to take their friends and family to the polls and to ask undecided voters: “Who do you really think can bring the economy all the way back? A career politician who spent 47 years raising taxes, growing government, waiving a white flag on international trade, or a proven job creator who’s driving the fastest economic recovery in history?”

Pence gave a similar speech in Tucson where about 500 people gathered at the airport.

Danny Worrell, a 46-year-old network technician for a telephone company who was a longtime Democrat, said Trump will get his vote again.

“Donald Trump came along with this enthusiasm I haven’t seen in a long time, and he’s a businessman,” the Flagstaff resident said. “I have no plans on ever turning back.”