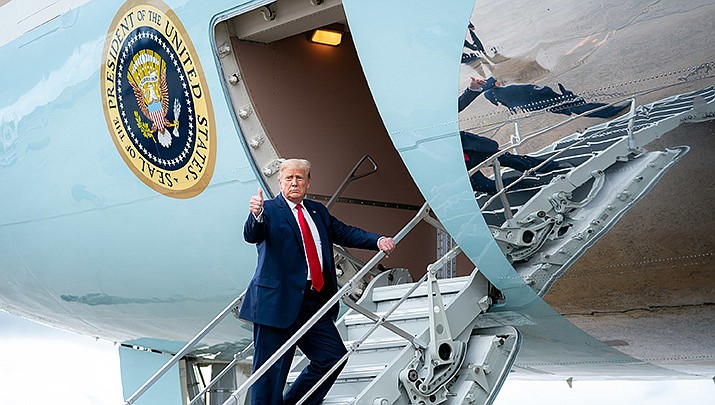 President Donald Trump and Democratic vice presidential nominee Kamala Harris were back stumping in Arizona Wednesday, evidence of what one report calls the high “voter power” of residents of the swing state.

The WalletHub report, “2020’s States with the Most and Least Powerful Voters,” rated Arizona the state with the fifth-most powerful voters, based largely on Arizona’s relatively newfound status as a toss-up state.

The high ranking “will come as a pleasant surprise to a lot of Arizonans,” said Jason Rose, an Arizona political consultant. “I don’t think most Arizonans really thought of themselves as all that important, because of the history of it being a red state – until now, perhaps.”

Voters may not think of themselves as important, but the presidential campaigns apparently do.

Harris had campaign stops scheduled Wednesday in Phoenix and Tucson, where she took part in “drive-in rallies” of about 100 cars at each event. She was joined in Phoenix by singer Alicia Keys.

It was the California senator’s second campaign trip to the state this month, after an Oct. 8 bus tour of the state, from Flagstaff to Phoenix, with her running mate, Joe Biden.

Trump, meanwhile, campaigned in Bullhead City and Goodyear, speaking for over an hour at each stop to crowds on an airport tarmac. The Trump campaign will be back in Arizona Friday when Vice President Mike Pence is scheduled to make campaign stops in Tucson and Flagstaff.

The president’s visit to Bullhead City marks “probably the first and last time there’s been a presidential candidate or a president in that part of our state,” Rose said.

“Why is he going to Bullhead City?” Rose asked. He said the president’s visit is an effort to “try to run up another few thousand votes, knowing that Arizona could be that close.”

It’s that closeness that put Arizona near the top of states in the WalletHub report, which combined FiveThirtyEight’s win probability calculations with each state’s population and number of presidential electors to get a “voter power score” indicating the impact each state’s voters will have on the outcome of the presidential race.

The report ranked Alaska first, followed by Iowa, Ohio and Georgia, with Arizona rounding out the top five. The lowest scores went to Washington, Massachusetts, Virginia, New York and California – states in which there is little question who will win.

Besides Alaska, each of the top states were rated “toss-ups” in the latest analysis from U.S. News and World Report, released Wednesday.

Despite decades as a reliably red state, Democrats are poised to make substantial gains in Arizona this fall.

Polls have consistently shown Democratic Senate nominee Mark Kelly ahead of Republican Sen. Martha McSally, a race in which Kelly has also raised significantly more money than McSally. If Kelly wins, Arizona would have two Democratic senators in Washington for the first since 1953, when Barry Goldwater was elected to his first term.

Democrats could also take control of one or both houses of the Arizona Legislature, said Rose, who noted that five of Arizona’s nine-member U.S. House delegation are currently Democrats.

“The question is, is Arizona becoming Virginia or Colorado,” said Rose, citing two historically conservative states that have more recently have “moved reliably into the blue column, at least in presidential elections.”

“Or is it a momentary political moment? We’ve seen these tides before. We saw them in 2006 and 2008 when the Iraq War – and frustration with it – upended Republicans here,” he said.

If the state does become more blue in the years to come, it won’t be a steady trajectory, Rose said.

“I predict if Democrats have a terrific year – and I think they will – then the political pendulum will swing big back to the Republicans in the state in 2022,” he said. “Because the Democrats will go too far when they’re in power, just like the Republicans often do.”

If Arizonans still are not convinced of their importance in this election by the WalletHub ranking or the president’s stop in a seldom-visited part of the state, Rose said, “they can realize it by anytime they turn on the television these days.”