Halloween in 2020: Some fun with death and fear, anyone? 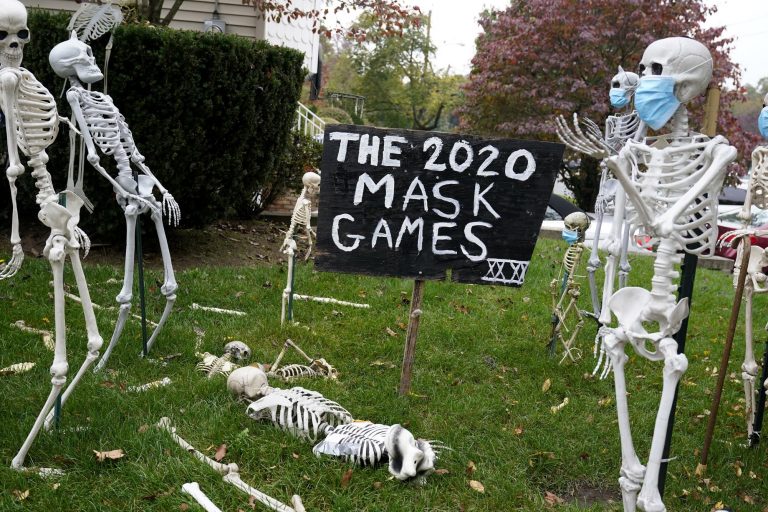 The setting: a rolling patch of Pennsylvania farmland, about 15 miles from the little town where “Night of the Living Dead” was filmed. The moment: Halloween season 2020, a moonlit Friday night.

She strides up to the hayride and beckons you to the dimly lit tent behind her. Her eyes are hollow. “Blood” streaks her nurse’s uniform. Across her forehead is a deep, oozing wound.

“This is the corona tent,” she says. “I’m Nurse Ratched. We’re gonna test you all for the corona.”

On the truck, the voice of a teenage girl slices through the darkness: “I TOLD you there’d be a COVID section.”

This is Cheeseman Fright Farm, one of those stylish Halloween attractions that emerge from the shadows in the United States of America when the leaves start falling and the days grow shorter.

On this night, it is the place to be: By 8:45 p.m., a line 400 strong — some wearing face masks, some not — waits, at $20 a pop, to be carted off into the darkness and have creatures in various stages of decay leap out at them for the better part of an hour.

Good fun? Other years, sure. But this year? This 2020 that we’ve clawed through 10 months of so far, through pandemic and uncertainty and racial injustice and sometimes violent unrest and unthinkable political divisions and, and, and, and ALL of it?

In a year when fear and death have commandeered front-row seats in American life, what does it mean to encounter the holiday whose very existence hinges on turning fear and death into entertainment?

What happens when 2020 and Halloween collide? Can being scared — under certain, controlled conditions — still be fun? 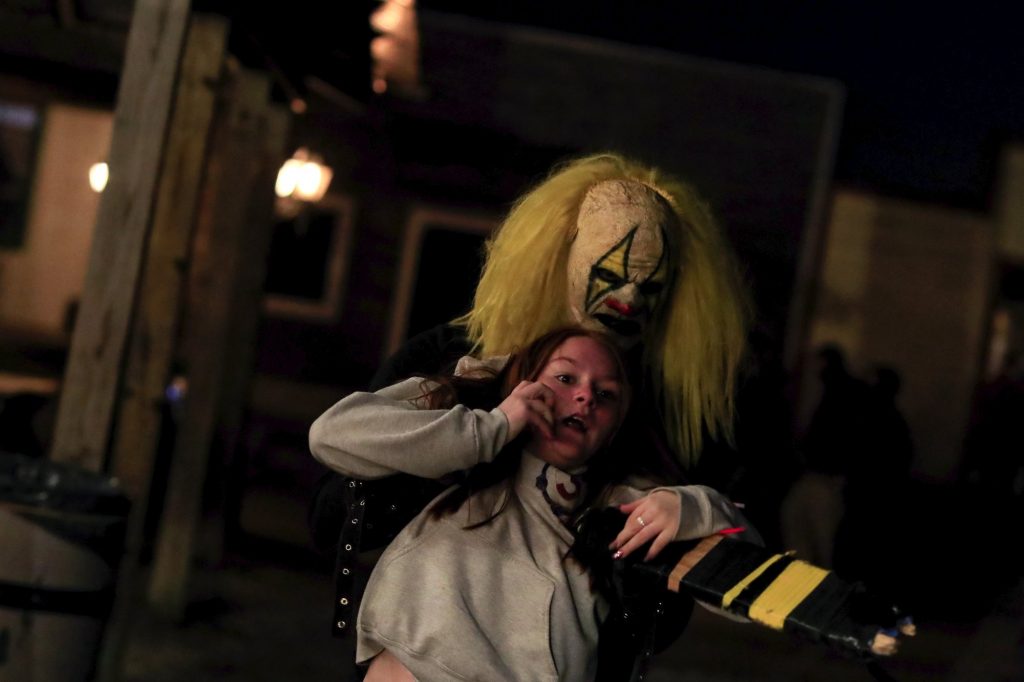 When we are afraid, we have sought out fear. For a century, that’s been the odd contradiction in American popular culture.

In 1931, when the Great Depression was at its height and American society seemed fragile, Universal Studios uncorked the first of its iconic horror films, delivering up Bela Lugosi as Dracula and Boris Karloff as Frankenstein’s monster.

In the 1950s, when American life felt finite, with nuclear menace from without and subversive threats from within, science fiction produced “Invasion of the Body Snatchers” and “The Thing From Another World.”

But usually the fear Americans have chased is different than — though certainly related to — the fear present in our lives.

Today, in a nation that has buried more than 225,000 of its own from COVID, how does the iconography of death play — the tombstones and caskets and decaying corpses and the feeling, however fleeting, that you might not make it around the next corner?

“This year is very different,” says David J. Skal, who chronicles the American fascination with horror and is the author of “Death Makes a Holiday: A Cultural History of Halloween.”

“We have to process all this unpleasant cultural stuff. But it’s easier to do when you’re not looking at it too directly,” Skal says. “I hope there is some kind of catharsis that comes out of Halloween this year.”

Yet with so many Americans affected by the events of this year, is that the kind of release people seek?

“There’s a real dichotomy right now,” says Matt Hayden, co-owner of Terror Town, an Old West-themed horror village in Williamsburg, Ohio. “If you’ve been directly impacted by serious illness or loss, we’ve heard from people that this isn’t something that appeals to them this year.”

That’s not the majority. Hayden reports record attendance this year, people who want to swap that dull, pounding fear for something immersive and cinematic — to lose themselves in a storyline for a moment.

“They can come to places like this,” he says, “and separate themselves from this year and what it’s been.”

The coronavirus might be 2020’s newest bogeyman, but other, older ones are just as menacing. Even beyond COVID, there’s enough fear and death in American life to go around this year.

Then there’s the racial reckoning fueled by centuries of fear and death visited unto Black people in America — and renewed by 2020′s convulsive events. As The Root wrote in October 2016, “Every day is Halloween for Black people.”

The HBO show “Lovecraft Country,” which ended its first season this month, played on that notion with a blend of fantastical horror and the ugly real-life terror of racism in 1950s America.

Though it was filmed before the pandemic descended and George Floyd’s killing by police set off a season of protest, its message — that there are two kinds of monsters, and sometimes they overlap — feels pure 2020, an extension of work like Jordan Peele’s “Get Out” and “Us.”

“I thought the world was one way, and I found out it isn’t. And that terrifies me,” one main character says, leaving us to wonder: Which horror does she mean? As showrunner Misha Green tweeted recently: “Nothing is scarier than real American history.”

“Lovecraft Country” got, instinctually, what Americans are absorbing as 2020 lurches along: What we’ve been trained by Hollywood and Halloween to consider frightening might pale compared to what’s around daily life’s next corner.

Are your finances uncertain? Unemployment might be your horror. Pre-existing health condition? As daunting as a murderer in a hockey mask. And if you are a young Black man who gets pulled over by police, the fear could be as dreadful as any seven-eyed monster with three-inch teeth.

Esther Jones, dean of the faculty at Clark University in Massachusetts, studies medical ethics, speculative fiction and African American literature. To her, 2020′s blurred lines are part of what makes this COVID-inflected Halloween — and the notion that fear can still be fun — into an unusual moment.

“Halloween, for one night, you know it’s coming. You’re going to immerse yourself in this fear and this release. And the next day you’re back to normal,” says Jones, an associate professor of English. “We could kind of go along happily assuming what we believed to be true — that we are resilient and strong and infallible.”

But 2020 “has turned over the rock. It’s removed the mask,” she says. “Everything that we thought was so strong and resilient and would not change is changing in front of our very eyes.”

So 10 months into this wretched year, what do fake blood, zombie mannequins in the supermarket foyer and hands clawing out from front-yard Halloween graves in the suburbs really give us?

“In light of 2020, playing with fear and death acts as kind of an escape from fear and death.” That’s how Ben Lish, 17, a senior at Hampton High School north of Pittsburgh, explains the allure of a place like Cheeseman Fright Farm, which he visited this month.

Across the nation in California, horror lover Melody Bentson offers a similar assessment. “It’s fun to look in the face of something that’s dark or scary and come out the other side,” she says.

That may be it right there. Perhaps the fear itself isn’t what offers release. Maybe it’s that the fear, consumed in bite-sized doses, comes to a distinct and measurable end. And when it does, no matter what the rest of the world is dishing out, turns out you’re still fine after all. You’ve made it. Or, at least, you can pretend you have.

“I understand that people want to escape. But I think it’s really important to separate what’s real and what’s not real,” says Yu-Ling Cheng Behr, co-producer of an education initiative called Remake Learning Days Across America and the mother of two young daughters.

“If that’s how you want to escape — what you call fake adrenaline, the scare — that’s fine,” she says. “But just know that’s not how real life works.” 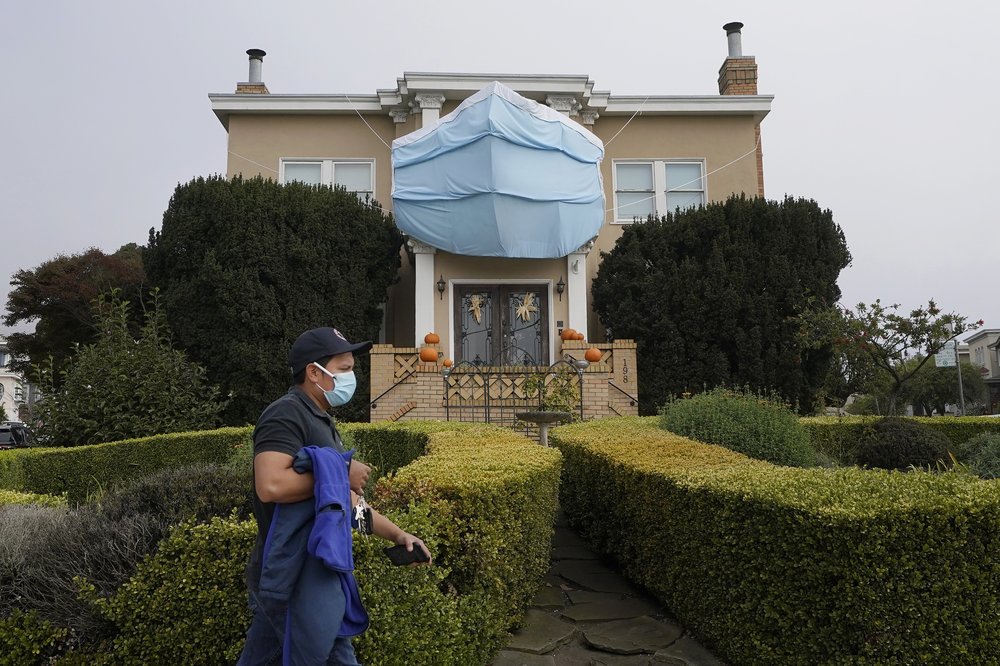 Real life. This year has certainly offered a sufficiency of that. As little ghosts and vampires navigate Halloween 2020, maybe Americans are living out the equivalent of a national horror film — navigating terrifying challenges, some loud and some more quiet, and trying to make it through. Collectively, at least.

“The notion of survival — that we come out on the other side of this — has perhaps changed, but perhaps come out stronger,” Jones says. But “if there’s no end in sight for it, how do we exist with this threat?”

Back in 1968, that original “Night of the Living Dead” ended with the hero — a Black man — surviving the flesh eaters only to be shot by a police posse. Then came “Dawn of the Dead” and “Day of the Dead.” Halloween will come and go, but those other horrors — they don’t end when the sun comes up the next morning.

PrevPreviousOpinion: The Genius of America’s Anti-Democratic Tradition
Next1/4 of Arizona voters say the opioid crisis has become less important to them following the pandemic, reveals surveyNext