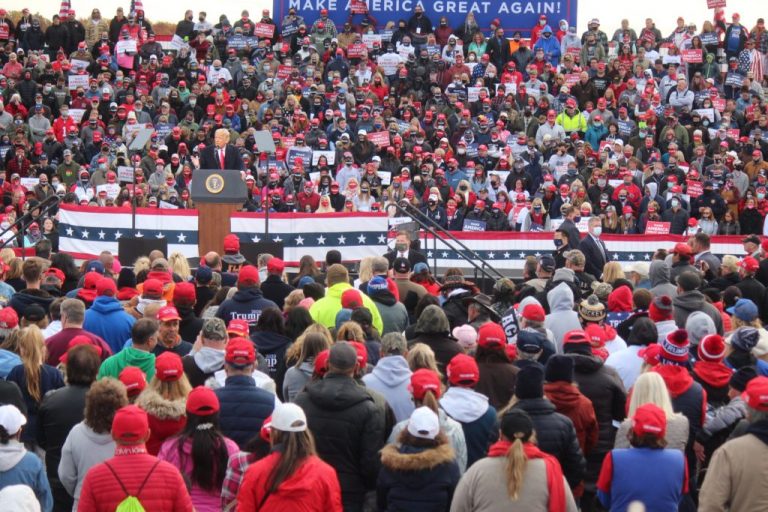 President Donald Trump flew into Manchester-Boston Regional Airport Sunday for what could be his final New Hampshire rally of the 2020 campaign, drawing a crowd of more than 1,000 people despite the chilly October weather.

President Trump is down by 11 points in the RealClearPolitics poll average — a significant departure from the 0.6 percent polling advantage Hillary Clinton held in 2016 — but the president spoke as if those polls didn’t exist, or even matter. The enthusiastic crowd was with him.

“This is not a crowd that comes in second,” the president told them. “This is like a poll, but more accurate,” he said. Trump also mocked the small, socially distant gatherings former Vice President Biden and former President Obama have had on the campaign trail.

Matt Mowers, the Republican nominee for the first congressional district, was at the rally and received a shout out from the POTUS. “It’ll be close,” Mowers told NHJournal. “Trump will win my district, and I think that means I’ll win, but it’ll be close statewide.”

The rally’s tone was upbeat and cheerful as the president played off the excited crowd, telling stories of his accomplishments while highlighting what he perceives as the worst aspects of the Biden/Harris ticket.

The Biden campaign released a statement attacking the president’s visit: “New Hampshire families deserve better than a President who, in the middle of a deadly pandemic, is working to dismantle the Affordable Care Act that provides critical protections to over 570,000 Granite Staters. And they deserve better than President Trump’s attempts to divide our nation and distract us from the fact that he has no plan to protect us.”

Fewer than 45,000 Granite Staters signed up for Obamacare during the 2020 enrollment period.

“Joe Biden wants to destroy my life,” said Tony Bonito, who drove from South Windsor, Conn., to see the president. “He wants to end fossil fuels. That was enough to push me over the edge,” Bonito, the owner of three gas stations, told NHJournal.

“Democrats have no plan. What do they do with all the oil employees once they abolish it?” Bonito asked. “They don’t care.”

Sunday was rally number 43 for Edward X. Young, a Manchester native who now lives in New Jersey. He plans to have attended 45 by Election Day in honor of the 45th president.

“The Democrats want to destroy America and turn us into a Marxist one-world-order country,” Young said. “This is the most critical election we’ve ever faced.

“Even more critical than 1860,” he says. “At least back then, radical Democrats only wanted to split us in half.”

Trump supporters couldn’t point to just one issue as their reason for backing the president. Gary from Jaffrey, N.H., told NHJournal it boils down to “saving our country and our Constitution.”

“It’ll be a nail biter,” Gary thinks. “We have a lot of liberals coming up into the state from New York and Connecticut — fleeing socialism. They didn’t remember to leave it behind.” 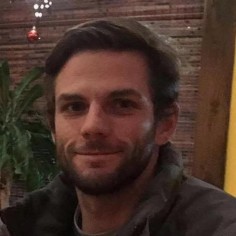 Christopher Maidment writes on New Hampshire politics from his home in Peterborough where he's involved with the NHGOP and is a candidate for state House of Representatives. He wrote this for New Hampshire Journal.
All Posts »