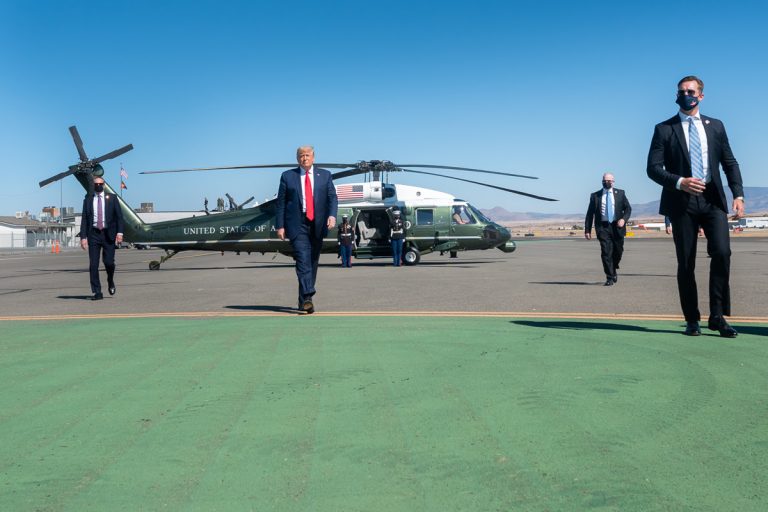 President Donald Trump was welcomed by boisterous MAGA-hatted crowds in Prescott and Tucson on Monday, the last stops on a Western swing as the campaign entered its final two weeks.

But not everyone was putting out the welcome mat.

Democrats in the state criticized what they called the president’s “super spreader” events during the COVID-19 pandemic, with Tucson Mayor Regina Romero, a Democrat, sending a “friendly reminder” of the city’s mask regulations – and the fact that Trump’s campaign still owed the city for services from previous visits.

Marion Pack, headquarters director for the Yavapai County Democratic Party, was more blunt. She said the president’s refusal to mandate masks or social distancing at his rallies is “unconscionable” and urged him to “stick to the White House.”

“We think that he’s just continuing his reckless behavior,” Pack said before Trump’s midday stop at the Prescott Regional Airport.

State Republicans were having none of it. They said Trump’s campaign stops highlight the differences between him and his Democratic challenger, Joe Biden, who has been much more cautious about gathering crowds to campaign in the face of COVID-19.

“The president’s visit today serves as another highlight of the stark differences between these two candidates,” said Arizona Republican Party Chairman Kelli Ward in a statement Monday. “On Nov. 3, when you wonder about how the polls were so wrong again – remember this moment.”

The moments she referred to were classic Trump campaign events.

Trump was greeted in Phoenix by Gov. Doug Ducey and Sen. Martha McSally, who accompanied him to Prescott Regional Airport where he was greeted shortly after noon by a crowd gathered on the tarmac.

In a roughly hour long event, Trump ran through his “Great American Comeback” speech, claiming progress in the fight against the coronavirus, improving the economy and securing the southern border. In between name-checking Republican officials in the audience, including McSally, Ducey and Ward, he blasted Biden for a litany of supposed liberal shortcomings.

The campaign then hop-scotched back through Phoenix to Tucson, where Trump repeated many of the same points during another hour long speech to a crowd gathered in front of row of hangars at the Tucson Jet Center at Tucson International Airport. Press pool reports said turnout at the Tucson event might have exceeded the projected 10,000 people.

In her letter the campaign, Romero estimated that the cost of “public safety response service” for Monday’s rally would cost about $50,000. And that’s on top of the $80,000 she said the Trump campaign still owes from a 2016 rally held at the convention center.

Romero said she welcomed the president’s rally, but asked that organizers abide by Centers for Disease Control and Prevention guidelines for COVID-19 safety, including mask-wearing and social distancing. She said city officials were concerned “that this can become a super-spreader event,” but conceded there was only so much the city can do.

“There’s not much we can do unless we have a police officer handing tickets and we’re not going to do that,” Romero said. “Police officers in this event are going to be protecting the president of the United States; that’s our number one concern.”

Joshua Polacheck, executive director for the Pima County Democratic Party, said Tucson welcomes all political parties but not if it means losing ground in the fight to contain COVID-19.

“Tucson is a very welcoming town. We believe that people of all political persuasions should be welcomed here, but we are also in the middle of a global pandemic,” he said.

He said Monday’s Arizona stops suggest “a little desperation” by Republicans in the home stretch of the election.

“The path to victory to victory for Joe Biden is very broad,” Polacheck said. “One of the paths to victory goes through Arizona. We think that we have a vision for America that the people of Arizona agree with.”