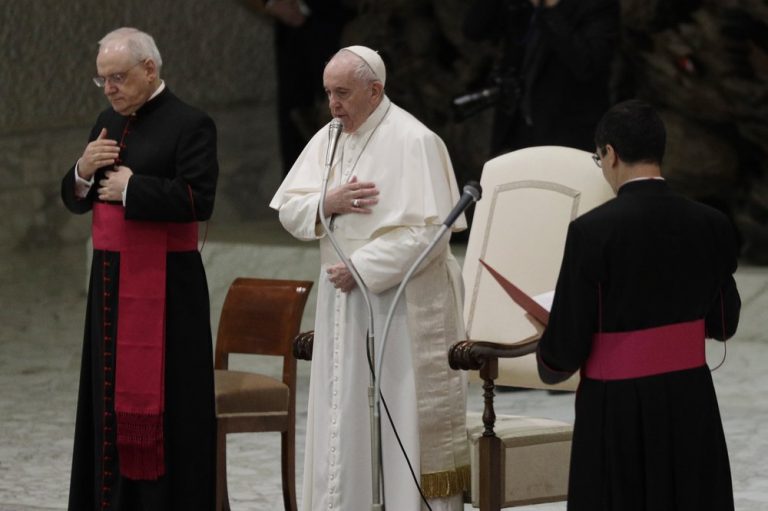 Pope Francis became the first pontiff to endorse same-sex civil unions in comments for a documentary that premiered Wednesday, sparking cheers from gay Catholics and demands for clarification from conservatives, given the Vatican’s official teaching on the issue.

The papal thumbs-up came midway through the feature-length documentary “Francesco,” which premiered at the Rome Film Festival. The film, which features fresh interviews with the pope, delves into issues Francis cares about most, including the environment, poverty, migration, racial and income inequality, and the people most affected by discrimination.

“Homosexual people have the right to be in a family. They are children of God,” Francis said. “You can’t kick someone out of a family, nor make their life miserable for this. What we have to have is a civil union law; that way they are legally covered.”

While serving as archbishop of Buenos Aires, Francis endorsed civil unions for gay couples as an alternative to same-sex marriages. However, he had never come out publicly in favor of civil unions as pope, and no pontiff before him had, either.

The Rev. James Martin, a Jesuit who has sought to build bridges with gay Catholics, praised the comments as “a major step forward in the church’s support for LGBT people.”

“The pope’s speaking positively about civil unions also sends a strong message to places where the church has opposed such laws,” Martin said in a statement.

However, conservative Bishop Thomas Tobin of Providence, Rhode Island, called for clarification. “The pope’s statement clearly contradicts what has been the long-standing teaching of the church about same-sex unions,” he said in a statement. “The church cannot support the acceptance of objectively immoral relationships.”

And Ed Mechmann, director of public policy at the Archdiocese of New York, said in a blog post that the pope had simply “made a serious mistake.”

Catholic teaching holds that gay people must be treated with dignity and respect but that homosexual acts are “intrinsically disordered.” A 2003 document from the Vatican’s doctrine office stated the church’s respect for gay people “cannot lead in any way to approval of homosexual behavior or to legal recognition of homosexual unions.”

Doing so, the Vatican reasoned, would not only condone “deviant behavior,” but create an equivalence to marriage, which the church holds is an indissoluble union between man and woman.

That document was signed by the then-prefect of the office, Cardinal Joseph Ratzinger, the future Pope Benedict XVI and Francis’ predecessor.

Later Wednesday, questions arose about when Francis first made the remarks. The scene of his interview is identical to one from 2019 with Mexican broadcaster Televisa, but his comments about the need for legal protections for civil unions apparently never aired until the documentary.

Director Evgeny Afineevsky, who is gay, expressed surprise after the premiere that the pope’s comments had created such a firestorm, saying Francis wasn’t trying to change doctrine but was merely expressing his belief gay people should enjoy the same rights as heterosexuals. He insisted the pope made the comments to him directly, through a translator, but declined to say when. 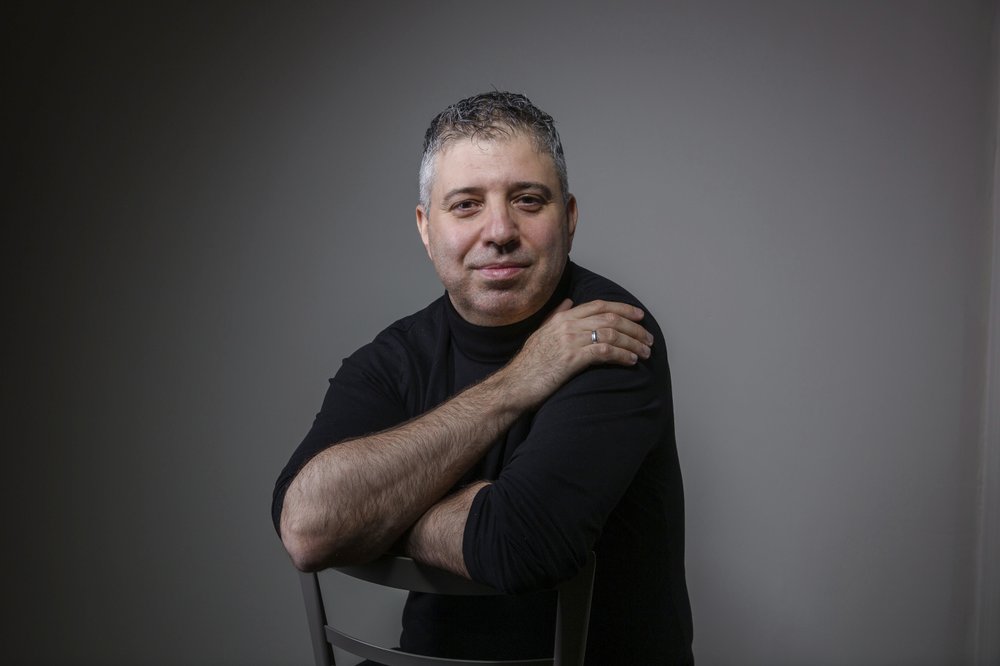 One main character in the documentary is Juan Carlos Cruz, the Chilean survivor of clergy sexual abuse whom Francis initially discredited during a 2018 visit to Chile.

Cruz, who is gay, said that during his first meetings with the pope in May 2018 after they patched things up, Francis assured him that God made Cruz gay. Cruz tells his own story throughout the film, chronicling both Francis’ evolution on understanding sexual abuse as well as to document the pope’s views on gay people.

Afineevsky had remarkable access to cardinals, the Vatican television archives and the pope himself. He said he negotiated his way in through persistence, and deliveries of Argentine mate tea and Alfajores cookies that he got to the pope via well-connected Argentines in Rome.

“Listen, when you are in the Vatican, the only way to achieve something is to break the rule and then to say, ‘I’m sorry,’” Afineevsky said in an interview.

The director worked official and unofficial channels starting in 2018, and ended up so close to Francis by the end of the project that he showed him the movie on his iPad in August. The two recently exchanged Yom Kippur greetings; Afineevsky is a Russian-born, Israeli-raised Jew now based in Los Angeles. On Wednesday, Afineevsky’s 48th birthday, the director said Francis presented him with a birthday cake at the Vatican.

But “Francesco” is more than a biopic about the pope. Wim Wenders did that in the 2018 film “Pope Francis: A Man of His Word.”

“Francesco,” is more a visual survey of the world’s crises and tragedies, with audio from the pope providing possible solutions.

Afineevsky, who was nominated for an Oscar for his 2015 documentary “Winter on Fire: Ukraine’s Fight for Freedom,” traveled the world to document the film: at Cox’s Bazaar in Bangladesh, where Myanmar’s Rohingya sought refuge; the U.S.-Mexico border; and Francis’ native Argentina.

“The film tells the story of the pope by reversing the cameras,” said Vatican communications director Paolo Ruffini, one of Afineevsky’s closest Vatican-based collaborators.

Ruffini said that when Afineevsky approached him about a documentary, he tried to tamp down his hopes for interviewing the pope. “I told him it wasn’t going to be easy,” he said.

But Ruffini suggested Afineevsky find the people who had been impacted by the pope, even after just a brief meeting: refugees, prisoners and gay people to whom he has ministered.

“I told him that many of those encounters had certainly been filmed by the Vatican cameras, and that there he would find a veritable gold mine of stories that told a story,” Ruffini said. “He would be able to tell story of the pope through the eyes of all and not just his own.”

Francis’ outreach dates to his first foreign trip in 2013, when he uttered the now-famous words “Who am I to judge,” when asked during an airborne news conference returning from Rio de Janiero about a purportedly gay priest.

Since then, he has ministered to gays and transsexual prostitutes, and welcomed people in gay partnerships into his inner circle. One of them was his former student, Yayo Grassi, who along with his partner visited Francis at the Vatican Embassy in Washington D.C., during a 2015 visit to the U.S.

The Vatican publicized that encounter, making video and photos of it available, after Francis was ambushed during that same visit by his then-ambassador, Archbishop Carlo Maria Vigano, who invited the Kentucky anti-gay marriage activist Kim Davis to meet with the pope.

News of the Davis audience made headlines and was viewed by conservatives as a papal stamp of approval for Davis, who was jailed for refusing to issue same-sex marriage licenses. The Vatican vigorously sought to downplay it, with a spokesman saying the meeting by no means indicated Francis’ support for her or her position on gay marriage.

Francis, the former Cardinal Jorge Mario Bergoglio, was fervently opposed to gay marriage when he was archbishop of Buenos Aires. Then, he launched what gay activists remember as a “war of God” against Argentina’s move to approve same-sex marriage.

The pope’s authorized biographer, Sergio Rubin, said at the time of his 2013 election that Bergoglio was politically wise enough to know the church couldn’t win a fight against gay marriage. Instead, Rubin said, Bergoglio urged his fellow bishops to lobby for gay civil unions.

It wasn’t until Bergoglio’s proposal was shot down by the conservative bishops’ conference that he publicly declared his opposition, and the church lost the issue altogether.

In the documentary, Francis essentially confirms Rubin’s account of what transpired. Of his belief in the need for legislation to protect gay couples in civil relationships, he said: “I stood up for that.”

Francis DeBernardo, executive director of New Ways Ministry, an organization of LGBT Catholics, praised Francis’ comments as a “historic” shift for a church that has a record of persecuting gays.

“At the same time, we urge Pope Francis to apply the same kind of reasoning to recognize and bless these same unions of love and support within the Catholic Church, too,” he said in a statement.

More conservative commentators sought to play down Francis’ words and said that while secular civil unions are one thing, a church blessing of them is quite another.

In a tweet, conservative U.S. author and commentator Ryan Anderson noted that he and some colleagues had gone on record a decade ago saying they would support federal civil unions for any two adults who commit to sharing domestic responsibilities. Such an arrangement, Anderson said, would leave churches the option of refusing to recognize these unions as marriage.