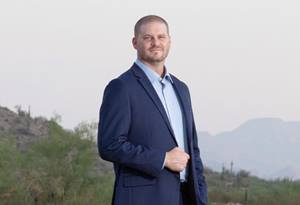 With the election just days away, Cronkite News is profiling candidates on the Nov. 3 ballot.

How would you rate Arizona’s response to the COVID-19 pandemic?
Initially, the response was good and people were complying and working together, Wood said, but now it’s affecting livelihoods by keeping Arizonans out of work and out of school.

“Our governor has overstepped his bounds” in response to the pandemic, Wood said.

He said he has read reports that the numbers of infections and deaths in the state were inflated and, if that’s the case, the response to the pandemic was too restrictive. There is no evidence to support such claims, health officials have told other media.

If elected, what steps would you take to help mitigate the impact of this disease?
Wood said suspending payroll tax for at least six months would help people catch up on expenses incurred since the pandemic began in March. Lowering taxes will be the biggest step in the long road of recovery, he said.

Do you have concerns regarding the security of our election?
“I do, and in a sense, I don’t,” he said.
Wood said he’s confident President Donald Trump will handle fraud allegations and address them.
Wood opposes mail-in ballots, which he said “opens up the door to a lot of fraud.”

How could race relations be improved in Arizona?
As a white police officer in the Deep South, Wood saw both sides of racial issues – and he doesn’t think the situation is as bad as the news media makes it out to be.

Things are far worse in the South than they are in Arizona. He sees it as an issue, but not one as big as it’s portrayed to be.
Americans are getting tired of the news media characterizing all issues into race and gender, he said. “The news is making a small (number of incidents), less than 1%, look like it’s a 90% and it’s not.”

What is the greatest issue Arizona residents face? If elected, how would you address it?
The biggest concern in Congressional District 3 is the choice of schools, and there aren’t enough scholarships for people to go to schools that would better fit their needs.

For example, children with special needs require specialized instruction that some public schools don’t offer. He also said in some low-income neighborhoods, scholarship money could be utilized by those who can’t afford transportation.

What other issues are important to you and your campaign?
Because his heavily Democratic district includes a large portion of Arizona’s border with Mexico, reform of immigration laws is important to Wood.

Human trafficking is a major issue that comes with illegal immigration, he said, claiming that much of it comes through Arizona. He criticized Rep. Raul Grijalva, his Democratic rival, for not stopping human trafficking during his 18 years in office.

Finishing the construction of the border wall is the first step in combating illegal immigration, Wood said. In areas that have the wall, he said, crime has dropped. The wall also allows Border Patrol agents and other law enforcement to be more proactive than reactive, he said.

What in your past work, political or volunteer experience makes you a better candidate to hold this office?
Wood has never held a political position but he cited his experience as a combat veteran and a law enforcement officer. Wood said people are tired of career politicians and want to be represented by someone who has lived paycheck-to-paycheck and been part of the average workforce. That lack of previous political experience, he said, gives him a better understanding of the repercussions of decisions made by the government at local and federal levels.

What is a personal challenge you feel you need to overcome?
Wood said he doesn’t have an underlying challenge. As a Marine, he said, he was trained to face problems as they surface.

Please share a quote or advice that you live by
“Leadership is the sum of those qualities of intellect, human understanding, and moral character that enables a person to inspire and control a group of people successfully.” – Marine Lt. Gen. John A Lejeune.

PrevPreviousFirefighters work through PTSD with peer support, counseling
NextHorse Fire Update as of 10/19/2020Next