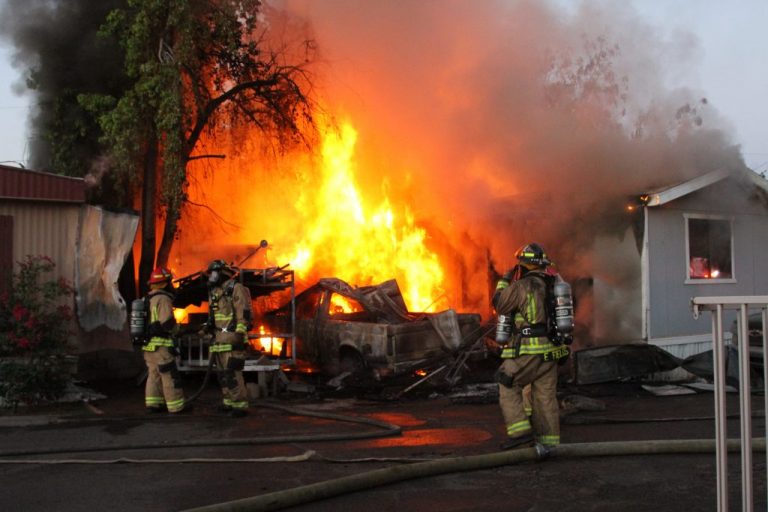 The horror took place about a decade ago, but the scene regularly replayed on a loop in Ashley Losch’s mind.

On that day, Losch, a Glendale firefighter and paramedic, entered a home and saw three gunshot victims: a 1-year-old, a 3-year-old and their father, who shot them both before killing himself.

She walked in alone and made charts of the entry and exit wounds on each victim. Then she exited alone, knowing there was no one else she could share the burden of those experiences with.

A counseling and peer support program at the Glendale Fire Department has helped Losch and other firefighters learn how to cope with the trauma they encounter at work, said Losch, who’s now a captain and a public information spokesperson for the department.

The same program has been implemented in at least five other fire departments in metro Phoenix: Avondale, Goodyear, Daisy Mountain in Phoenix, Queen Creek and Sun City.

Glendale Fire started the program about a year ago, using a $43,000 grant to bring in Dr. Tania Glenn, a national expert on post-traumatic stress disorder, to counsel and train other firefighters on peer counseling. Glenn and Losch said such programs are necessary in a profession where workers continually deal with trauma and violence – pressures that have only increased during the COVID-19 pandemic.

“We as an organization realized that mental health was becoming a more prominent need in our organization and that our firefighters were struggling more than they were talking about,” Losch said.

A 2017 study conducted by the Ruderman Family Foundation found that 103 firefighters died by suicide that year, compared with 93 who died in the line of duty.

Glenn said Glendale firefighters have had to deal with some particularly hard calls.

Glenn said firefighter culture has evolved since the program started. Firefighters now “make it the culture of Glendale fire to ask for help and to get help,” she said.

So far, 20% of the department’s 250 firefighters have seen Glenn for counseling.

Losch said she was shocked by those numbers because firefighters don’t typically ask for help.

Some of the training taught firefighters how to spot signs of post-traumatic stress disorder in themselves and one another.

That could be “you’re treating your family differently, or you’re withdrawing from activities you normally enjoy, or drinking too much or self-medicating,” or noticing things don’t feel right, Losch said.

When she was dealing with the horror of what that father did to his children, Losch said, she didn’t realize that replaying the scene in her head for years wasn’t normal.

“I didn’t realize that there was a process to get rid of that and to let go of some of the pain you feel from going on these calls,” she said. “I thought it was just something that we were going to experience for our careers, and that it was part of the job.”

Glenn’s training allowed her to understand that “these are things I can process,” she said. “It’s still there, but I don’t have to think about it every day.”

Another part of the program involves a three-day training class for 20 firefighters, who function as a peer-support group for one another.

“I taught them not to fix things but to help guide people to their solutions,” said Glenn, who oversees the peer counselors. “I taught them how to listen. I taught them really good communication skills and crisis intervention skills.”

It’s different from their usual work, she said.

“Their typical job is to get in and fix the problem and get out as quickly as possible. But with people’s lives and problems that doesn’t work,” Glenn said. “I teach them how to really take care of the hearts and minds of their fellow firefighters during rough times.”

Losch said a support group of her peers helped her through her own trauma.

“We’re a small enough department that everybody knows each other, and it’s comfortable reaching out to somebody who sees the same things,” she said. “It’s talking to a friend.”

After getting coffee with a member on the team, Losch said she felt reassured and validated that what she was going through was normal.

The peer she met with encouraged her to see a counselor, which Losch said has helped her file away those traumatic memories so she can enjoy life.

“We didn’t choose this profession so that we could go home and be miserable on our days off,” she said. “We want to enjoy our lives and that can’t happen if we’re not taking care of our mental health.”

Glenn, who has worked with departments in Arizona and Texas, said the program should be conducted across the U.S.

“This program saves lives. I’ve seen it save lives,” she said.

The Goodyear Fire Department has been using Glenn’s program since 2016, and in the first year of the program, firefighters used 1,985 fewer sick hours than in 2015, according to the department. That’s about two-thirds of the hours one full-time firefighter works in a calendar year, Chief Paul Luizzi said.

Five years after the program’s inception, he said, more than 40% of the 114 people in the department still meet with Glenn.

“When she comes, she’s booked the entire week,” Luizzi said. “She has no lunch time. People invest their own time to see her.”

Glenn said anyone who has mental health issues, no matter their profession or life situation, should seek help.

“A lot of people really struggle asking for help,” she said. “I would say ease into it. Know that you’re in the driver’s seat and that no matter what you say in a counseling environment, you’re not judged.”