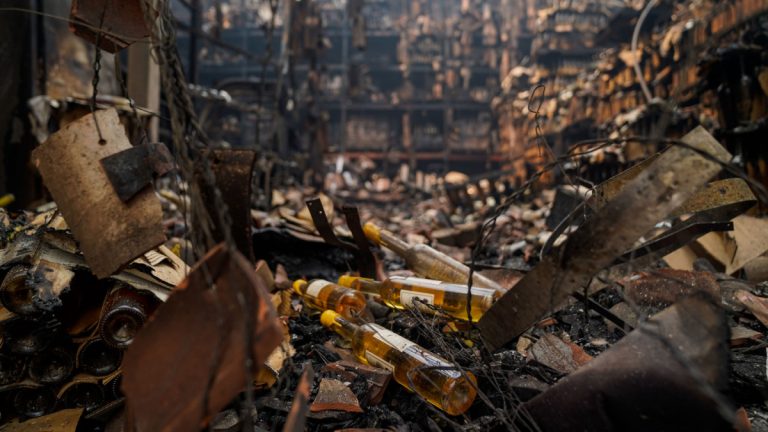 In 2019, wind and the Kincade Fire brought smoke and blackouts. In 2018, the County Fire affected a small part of the valley – the same year the enormous Camp Fire devastated other parts of Northern California, killing more than 80 people. In 2017, as in preceding years, wildfires affected parts of Napa County. The fire comes closer to the vineyards some years than others.

This year, the Glass Fire and other blazes that have burned for weeks have disrupted the grape harvest at its peak, imperiling an industry whose wine sales in the U.S. are estimated to be worth more than $43 billion a year. About 30 wineries have been destroyed or damaged by the Glass Fire, which Cal Fire said began Sept. 27, has burned 67,484 acres and is 97% contained.

Smoke taint – which can ruin the taste of wine – looming coronavirus concerns and destruction of equipment and buildings are among the challenges Napa vineyards are facing. Among those is Hunnicutt Wine Co., a family-owned winery in St. Helena that produces small lots of cabernet sauvignon, zinfandel, merlot, pinot noir and chardonnay.

“From a business standpoint, it’s a concern,” said Justin Hunnicutt Stephens, founder and owner of Hunnicutt Wine. “People are planning trips, and they think, ‘It’s always on fire out there, let’s go somewhere else.’ From an environmental standpoint, you have hotter years and more fire, facing the compromise of crop – that’s a big deal.”

Since January, more than 8,500 wildfires in California have burned more than 4 million acres, which is more than double the previous record set in 2018. Thirty-one people have died statewide because of wildfires this year and more than 9,200 structures have been destroyed, according to Cal Fire.

Fire only explains part of the challenges faced by Stephens and many other vintners. Losing electricity and water, as Hunnicutt Wine did after the Glass Fire, affected the winery’s side hustle: “custom crushing” grapes grown by other winemakers.

That provides Hunnicutt a large portion of the winery’s revenue.

“In the state that we are in, where we can’t operate – then we can’t custom crush and that is a challenge, no question, from a revenue standpoint, that is just elimination of it,” Stephens said.

Beyond the lucrative business of producing award-winning vintages, Napa Valley also is home to wine tasting, tours and restaurants. The COVID-19 pandemic has affected a great deal of the valley’s business, with restrictions and less travel. The fires pose another threat to business and have forced wineries to rebuild and rethink their harvest.

A state of emergency was declared Sept. 28 by Gov. Gavin Newsom for Napa, Sonoma and Shasta counties, forcing some areas to evacuate. Since then, however, many restrictions have been lifted.

The future of California’s wine industry will be affected by climate change and other environmental pressures, and with the rising number of wildfires in California, winemakers will be forced to think about such challenges as early ripening, droughts and more.

High temperatures and wind are forecast for this week, raising concerns across Northern California. Napa Valley is expected to reach the mid-90s, and San Francisco may reach the mid-80s.

Flames chewed through Hunnicut’s pumphouse, water well, a hospitality building and most of one of its outdoor crushpads. With no water or power and the loss of a building used for offices – as well as all the equipment on the crushpad – Hunnicutt’s 2020 harvest is “basically done,” Stephens said.

The peak season for grape harvest is August through November, which is when fire season typically ends, too – although fire officials warn the fire season has gotten longer each year. In 2019, grapes were one of California’s top producing commodities, earning the state $5.41 billion in cash receipts, according to the California Department of Food and Agriculture.

In 2019, the total retail value of wine sales in the U.S. reached $75.1 billion, meaning that California made $12.1 billion more than the rest of the U.S., according to the Wine Institute, a public policy advocacy organization for the California industry.

Smoke taint is a concern for both consumers and vintners at a time when many winemakers are trying to rebuild their properties.

“Here I am now not just worrying about smoke tainted wine but a destroyed winery,” Stephens said.

There is no certain way to combat smoke taint. Testing for smoke exposure has been slow and testing backlogs raise questions of whether wineries should harvest in the coming days or assume their grapes are tainted, Stephens said.

Long term exposure to fresh, dense smoke raises the risk that the grapes will absorb volatile phenols, which become a part of the berry, said Anita Oberholster, a University of California, Davis an enology specialist with the cooperative extension service. She likened the distinctive taste of smoke taint to “licking an ashtray.”

The taste comes from organic compounds released by fire, specifically a wood fire. The compounds have smokey, medicinal, barbecue or ash aromas, she said, and are naturally present in grapes, toasted oak and virtually everywhere. The aromas are released throughout the fermentation and aging process, she said.

The taste can become overpowering, making the wine one dimensional as varietal characteristics are taken away. This is an example of too much of a good thing is not a good thing anymore, Oberholster said.

“Sometimes a vineyard right next to a fire is better off than one 40 miles away because it depends on so many different factors – typography, wind direction and the temperature of the fire,” Oberholster said.

Many wineries are now considering whether to harvest or not. The ashy taste and the quality of the wine may turn off consumers.

“Everybody wants to ensure that if there’s a bottle on the shelf, that that bottle should be the quality the consumer expects,” Oberholster said. “Not only not being impacted by smoke … but being the quality that that label should be in that price range.”

Some winemakers, however, are finding a creative way to use their tainted grapes, including making brandy and vermouth. The charred flavor makes this possible, and the investment in making these alternatives is part of an effort to salvage lost revenue.

Another challenge that many wineries are facing is the lack of visitors. Stephens said many wineries will have to rely on consumer trust, especially because it will be harder to find new customers as coronavirus fears and the continuing wildfires keep people away.

“You’ve already reduced or narrowed down the demographic that’s willing to come due to COVID-19 concerns,” he said. “Now you further reduce it by almost anyone who has seen what has been posted or reported on.”

Sattui called the castle the second love of his life and said he never thought the stone and brick fortress would be affected by fire. The farmhouse that was destroyed contained “120,000 bottles of wine with a retail value of approximately $5 million, a bottling line, a portion of the wine from the 2020 vintage and offices and a laboratory above.”

It is estimated that it will take two to three years to repair and re-equip the building, costing up to $12 million, as most of the antique materials were from Europe. The estimated total loss at Castello di Amorosa is up to $20 million, Sattui said.

The financial impact of the fires and pandemic have affected Napa wineries significantly.

“We make our livelihood on people coming to the castle and buying our wine,” said Jim Sullivan, the vice president of public relations and marketing for Castello di Amorosa. “Between COVID-19, which shut the valley down, basically, and now the fires, it’s had a big impact. It’s devastating.” 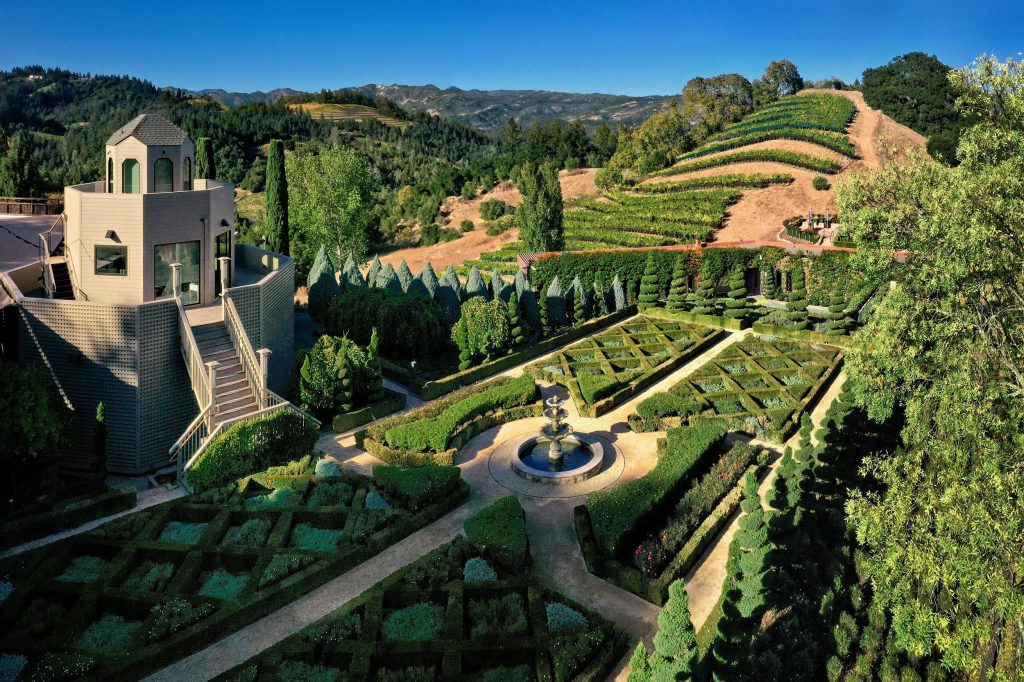 Newton Vineyard, which was greatly affected by the Glass Fire, has already started to rebuild. The flames spared the storage facility and vintage wines at Newton, which is on Spring Mountain outside St. Helena.

“Thankfully, all our people were evacuated safely. We are actively providing immediate around-the-clock support and assistance for them now and over the coming months,” Jean-Baptiste Rivail, the winery’s general manager, told Cronkite News in an email. 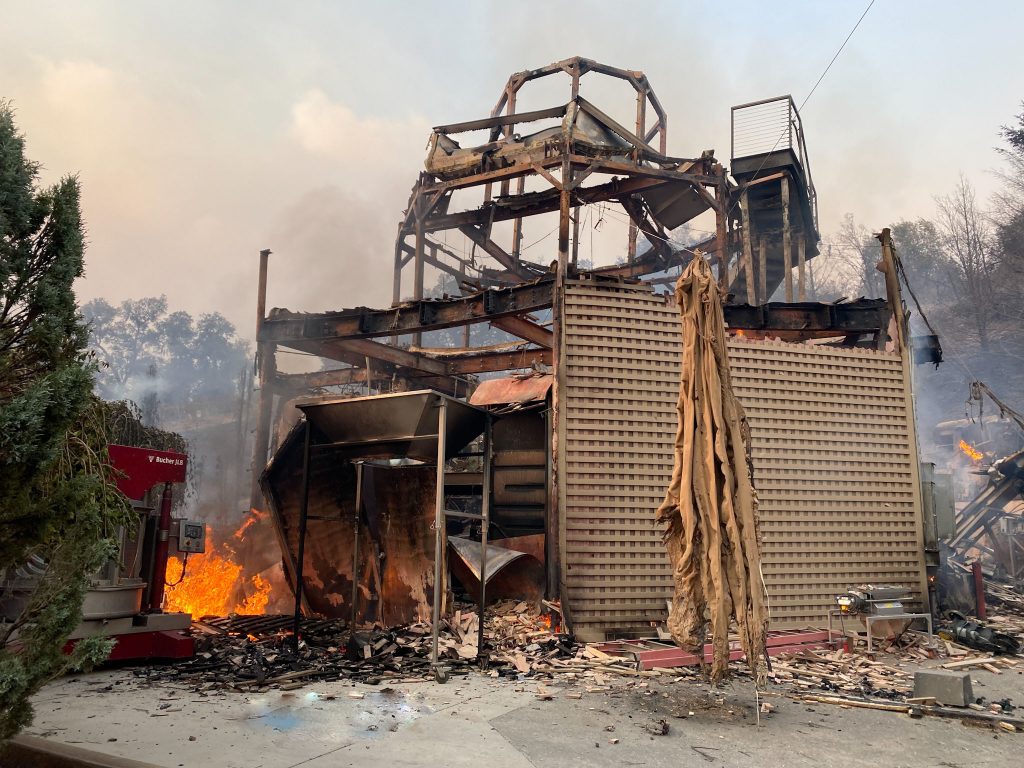 All facilities will be closed to assess damage, and Moët Hennessy, the winery’s parent company, intends to “do whatever it takes to rebuild this truly special place.”