Rush to register voters is on after court shortens registration window 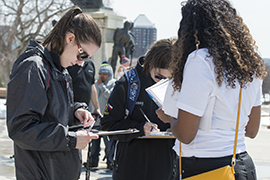 Voting rights groups who thought they had until Oct. 23 to register new voters were scrambling Wednesday after a federal court set a new registration deadline of 11:59 p.m. Thursday.

The ruling late Tuesday by the 9th U.S. Circuit Court of Appeals stays a lower court’s order that extended the deadline from the original Oct. 5, after advocates claimed that the COVID-19 shutdown earlier this year prevented them from registering thousands of potential voters.

The appeals court said the lower court had no business extending the deadline – but also delayed its stay until Thursday to ensure that the thousands who have registered since Oct. 5 would not have their registrations thrown out.

Advocates said they were disappointed with the ruling. But they also claimed that they have been able to register thousands of new voters during the registration window since Oct. 5, and that they continue doing so until Thursday.

“Mi Familia Vota along with our partner organizations are going to continue to work tirelessly to ensure that we can register as many eligible voters as possible so they can participate in this Election,” said Yara Marin, the organization’s political director.

“We’re also super proud that we stood up for our fundamental right to vote, and at the end of the day we won an extension of 10 days to the voter registration deadline,” she said.

State Rep. Reginald Bolding, D-Phoenix, and co-executive director of Arizona Coalition for Change, said voting rights activists are “using whatever we can to do what we can to register literally hundreds and hopefully thousands of people over these next two days.”

“What we expect is that our election officials will do whatever they can to ensure that people are able to vote in a safe and secure manner and that we get the results timely,” Bolding said.

Mi Familia Vota and Arizona Coalition for Change filed suit in federal court on Sept. 30 arguing that restrictions imposed for COVID-19 sharply reduced their ability to reach out to and register new voters, potentially disenfranchising thousands of prospective voters. A federal district judge agreed on Oct. 5 – the day registration was supposed to end in Arizona – and ordered the deadline extended to Oct. 23.

Arizona Secretary of State Katie Hobbs initially said she would not challenge that ruling because she did not want to further confuse voters. But when the Republican National Committee and the Arizona attorney general said they planned an appeal, Hobbs changed course and joined the appeal last weekend.

After a hearing Monday and a day of mediation Tuesday failed to reach an agreement, a three-judge panel of the circuit court stepped in late Tuesday night and ordered the new Oct. 15 deadline.

The “prospective” stay balances the burden of a registration extension on state elections officials with the concern that ending it immediately could invalidate registration of voters who had signed up since Oct. 5.

“As the Secretary recognizes, citizens who have begun the process of registering to vote but have not yet completed their registration have every reason to be relying on the district court’s extension of the registration deadline,” the court wrote, explaining its decision to let the extension run until Thursday.

Circuit Judge Jay Bybee agreed that the extension should be ended but he argued that it should have come immediately. Bybee said the district court had “thrust itself into the election by altering the eligibility requirements for voting in Arizona” on a “thin complaint and record.”

A spokesperson for Hobbs said Wednesday that the latest ruling “gives election officials time to ensure that we conduct a safe, secure and accurate election.”

“It allows voters to take action by giving them time to register for the general election, which is already underway,” said Sophia Solis, the spokesperson. “We are encouraging voters to not wait until the deadline, and to register as soon as possible.”

Republican National Committee Chairwoman Ronna McDaniel hailed the appeals court ruling, tweeting that the “eleventh-hour lawsuit” to extend the deadline “would have created administrative chaos and endangered the integrity of the state’s elections.”

“We want every Arizonan to vote, which is why we have spent years registering thousands of them,” McDaniel tweeted. “But we will not stand by while Democrats try to weaponize the courts for political gain!”

“This is the most important election of our lifetimes and we need every Arizonan to make their voice heard,” said Arizona Democratic Party spokesman Matt Grodsky.

He echoed the voting advocacy groups and encouraged Arizonans to “make their plan to vote early, including registering to vote tomorrow if they haven’t yet.”

Despite the shortened timeframe, however, Bolding said he was glad for the extension they were granted.

“We’re still proud that we stood and fought for democracy,” he said.