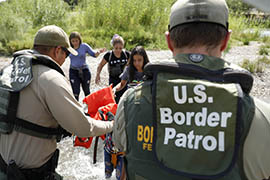 The number of migrants apprehended at the southern border fell sharply in fiscal 2020, a drop analysts attribute in large part fears of the COVID-19 pandemic and the economic havoc left in its wake.

Final numbers are set to be released Wednesday at an event with Border Patrol officials in Tucson, but apprehensions through the first 11 months of the fiscal year are less than half the total for fiscal 2019. About 400,000 migrants had been apprehended through August, compared to 977,509 people caught the year before.

Experts said part of the slowdown is due to Trump administration policies, but much can be blamed on COVID-19 and the economic woes that followed, giving migrants “less of a reason to come here in the first place.”

“It being fairly pandemic-induced because of elevated fears and lack of economic opportunity in the places where they would have maybe sought out to go before,” said Sara Ritchie, director of communications at Kino Border Initiative.

Border crossings began to dip drastically in March, about the time that COVID-19 hit the United States and shutdowns started to be imposed. Migrants apprehended at the border fell from 34,442 in March to 17,086 in April – compared to 109,415 in April 2019.

Besides limiting travel within and between countries, the virus and the subsequent shutdowns of businesses drastically affected the economy of the U.S. and the job opportunities here in 2020 as opposed to last year.

“In 2020, you know, we have the COVID-19, we have the recession that resulted from COVID-19, so there’s this less of a reason to come here in the first place,” said Alex Nowrasteh, director of immigration studies at the Cato Institute.

Experts also note that 2019 saw an unusually high number of apprehensions at the border, the most in at least a dozen years.

“In 2019, there was a big surge of asylum-seekers coming across the border, especially around late spring and early summer, so that makes 2019 look like a bit of an outlier,” Nowrasteh said.

Analysts agree that at least part of the reduction is likely policy driven, pointing to programs like the Trump administration’s Migrant Protection Protocols that force immigrants to wait in Mexico for processing.

“So we saw an increase in the number of people being sent back to Mexico under that agreement, said Jessica Bolter, an associate policy analyst at the Migration Policy Institute. “We also saw Mexico step up their immigration enforcement efforts, kind of in response to U.S. pressure.”

The U.S., Mexican and Canadian governments also restricted legal border crossings in March to essential travel only, in another attempt to stem the spread of COVID-19.

“The U.S. has the technical ability to close its borders when it needs to like a pandemic when it is not a wise time for people to be moving in long distances,” said Ernesto Castaneda, an associate professor of sociology at American University in Washington, D.C.

Some experts who support the administration’s tough immigration policies said they expect the outcome of this fall’s presidential election could determine what direction the number of border apprehensions will take.

“We have an election coming up, and you know it depends who is going to be in office come January and what the policies of that administration might be,” said Ira Mehlman, the media director for the Federation for American Immigration Reform.

That was echoed by Lora Ries, a senior research fellow for homeland security at the Heritage Foundation, who said that if Trump is re-elected to “a second term, then I think these agreements can continue.”

But others believe the next resident of the White House will have less impact on apprehensions than economic and other factors.

Bolter said people who were struggling before the pandemic are probably struggling even more now and will continue to migrate, even though border enforcement can make that difficult.

“The kind of lingering effects of the pandemic could lead to kind of continued higher levels of enforcement at borders that might make it more difficult, but I think people are going to keep trying to move,” she said.

Nowrasteh also believes that the hardships of COVID-19 are still going to motivate people to migrate to the U.S., legally or otherwise.

“I think that any kind of, like, decline this year is merely temporary,” he said. “People still want to come to the United States and there are still very few legal ways to do so.”