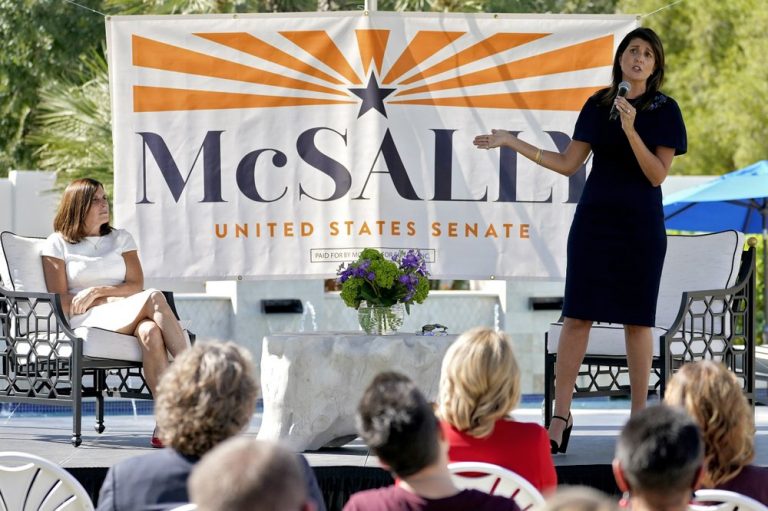 Arizona Sen. Martha McSally called in one of the Republican Party’s most prominent foreign policy hands Monday to press her case that Democrat Mark Kelly has problematic ties to China.

Former U.N. Ambassador Nikki Haley said China is the largest geopolitical threat to the United States, and Kelly doing business with Chinese firms should be disqualifying.

“I want to know that we’re going to send a senator from Arizona to D.C. that understands China is a national security threat, not someone who wants to hold their hand and figure out how to get them to invest in his company,” Haley said.

Kelly co-founded a high-altitude balloon company in Tucson that received an investment from Tencent Holdings, a massive Chinese investment firm. Kelly no longer works for the firm but retains an equity stake, according to his financial disclosures.

While he was an astronaut, he participated in a forum for young leaders from both countries and met his wife, former U.S. Rep. Gabrielle Giffords. After retiring, he pitched vitamins for a Chinese company.

It’s a case McSally made in a debate last week with Kelly, and that she and her GOP allies have pressed aggressively for months in television ads.

Kelly has dismissed the attacks as an election-year ploy, pointing to a memo urging Republican Senate candidates to blame China for the pandemic. He said last week he’s “known China as an adversary my entire adult life.”

“Sen. McSally is using false, negative attacks trying to attack my patriotism again,” Kelly said during last week’s debate when pressed on China by McSally. “I think Arizonans are tired of it.”

McSally and Haley, the former governor of South Carolina and one of the most prominent women of color in the Republican Party, spoke to a crowd of several dozen masked and distanced supporters in a Scottsdale backyard. They aimed their pitch particularly toward women, encouraging them to run for office and discussing their own fights against more powerful interests.

McSally urged her supporters to ignore what she called “fake polls,” which have consistently showed her trailing Kelly. Her race is a dead heat, as is the presidential contest in Arizona, she insisted.